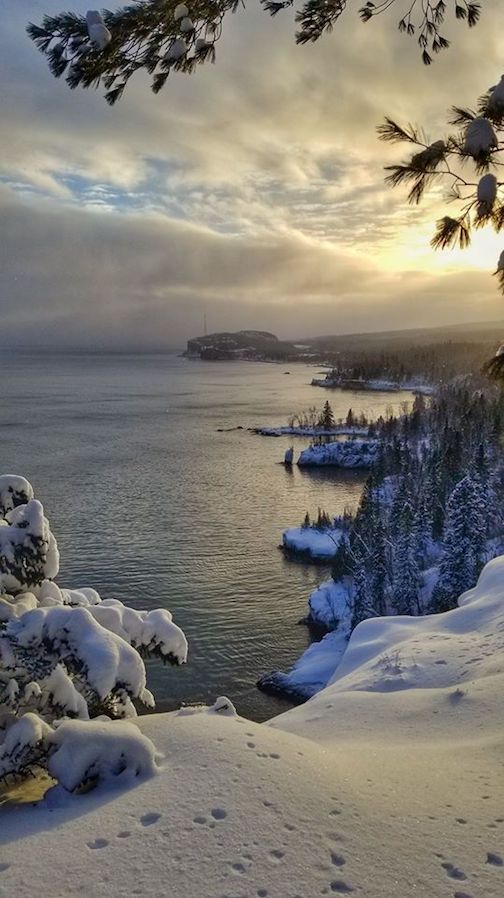 Winter is in full swing on the North Shore, with plenty of powder on the ski slopes and well-groomed ski and snowmobile trails throughout Cook County. There are two events this weekend to celebrate that fact. The Gunflint Lake Cabin Fever Festival at Gunflint Lodge, complete with outdoor games and a fat-bike course on Saturday. Also on Saturday, the Lutsen Trailbreakers Snowmobile Club is hosting its 3rd annual Vintage Snowmobile Ride at Cascade Lodge on Saturday. Registration starts at noon with the ride on the trails starting at noon.

Indoors, there are lots of opportunities to see movies and look at great art this week.

Three different films will be screened in Cook County in the next few days.
On Thursday at 7 p..m., North House Folk School will screen “Sami Blood,” a powerful story about a reindeer-breeding Sami girl and her fight for identity.

Exposed to the racism of the 1930’s and race biology examinations at her boarding school, the Sami girl, Elle Marja, starts dreaming of another life. To achieve this other life, she has to become someone else and break all ties with her family and culture. It’s a powerful story. Here’s the trailer:

The film starts at 7 p.m. and is free. Bring your own popcorn.

On Friday,  the Grand Marais Public Library will continue its Friday Reels film screening series and show “Queen of the Katwe.” The film is about a how a Uganda girl’s world changes dramatically after becoming a chess star. Here’s the trailer:

The film starts at 6 p.m. at the library and is free.

“Saving Snow,” a 53-minute documentary on the how a warming climate is affecting the snow season in the U.S., will be screened at Lutsen Resort at 7 p.m. on Saturday and at North House Folk School at 7 p.m. Tuesday, Feb. 27.  The film will be screened at a number of different venues on the North Shore in the coming weeks, too.

“Saving Snow” explores how our disappearing snow season is more than just a frustration for winter sports enthusiasts. It means lost income for the many towns and small businesses that depend on winter tourism and recreation to stay afloat. “Saving Snow” focuses on people coming to terms with these changes. But it also presents solutions. The film highlights individuals and organizations who are working to reduce their communities’ impacts on the environment and raise awareness of the need for action.
Here’s the trailer.

“Saving Snow” will also be screened at Tettegouche State Park at noon on March 10, the Two Harbors Public Library at 6:30 p.m. March 22 and at Voyageur Brewing Co. at 7 p.m. Saturday, March 24. Free. All invited.

And next Tuesday, Feb. 27, Staci Drouillard will give a presentation at Cook County Higher Education entitled:  “Chippewa City – People and Stories.”  A Grand Portage descendant, Drouillard began interviewing Chippewa City elders in 1987, which forms the basis of her book “Walking the Old Road: Chippewa City & The Grand Marais Chippewa,”  which will be published by the University of Minnesota Press. Drouillard told some of these stories on WTIP Community Radio. To hear them and learn more, click here.
The presentation is from 5-7 p.m. on Feb. 27. Light snacks will be provided. Donations appreciated. All invited.

A new exhibit has opened at the Grand Marais Art Colony. Entitled “Swinging the Compass,” the sculptural installation by Twin Cities artist Danny Saathoff focuses on the effects of climate change on Lake Superior. “Swinging the Compass,” a sculptural installation by Danny Saathoff, opened at the Grand Marais Art Colony this week. It continues through March 3.

The Grand Marais Art Colony is open from 9 a.m. to 4 p.m. daily. The exhibit, which is a kinetic installation, is in the Founders Hall and continues through March 3. Stop by and experience this extraordinary work. Check out a short video here.  Saathoff was recently interviewed on WTIP Community Radio. Listen here.

The North Shore Winery is exhibiting artwork from the Collector’s Art Sale, a fundraiser for Art ‘Round Town. The artists include John Franz, Betsy Bowen, Bonnie Gay Hedstrom, Kristin Blomberg, Anna Hess, Kari Vick, Peter Max, Bruce Johnson and Marshall Ferster. The sale will continue through the end of February.

At Tettegouche State Park, Winter Wonderland, a photographic exhibit of landscapes on the North Shore, continues through the end of the month. The Tweed Museum of Art has a number of exhibits,  including its 2018 UMD Faculty Show entitled “/Fine/Refine/Define.” The museum also features a weekly exhibit of a student’s work as well as “Chance,” a multi-media exhibit.

“Treasures from Home: An Anthology of Gifts from Collectors” is also ongoing, with a wide selection of donated works, including the photograph below of French actress Catherine Deneuve by Mary Ellen Mark. The photo was taken in Grenoble, France. “La Sirene de Mississippi, Portrait of Catherine Deneuve” by Mary Ellen Mark is at the Tweed Museum of Art. 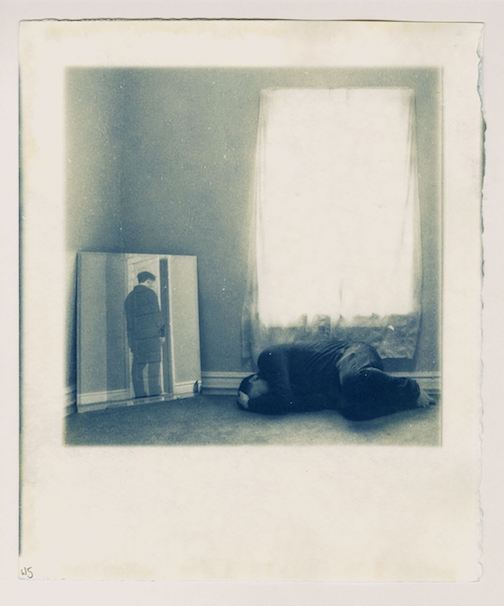 “The Spoilation of Vermin” by Wilson Johnson. Johnson is one of the photographers exhibiting at the Duluth Art Institute.

The photographic exhibit continues through April 2.

The Joseph Nease Gallery in Duluth is featuring a new exhibit entitled “Sweep,” a show featuring a wide range of local, regional and national contemporary artists. The exhibit opened about two weeks ago and it has been so popular that the gallery has extended its run through May. The contemporary art gallery opened in 2017 and is located at 23 W. 1st St. in Duluth. 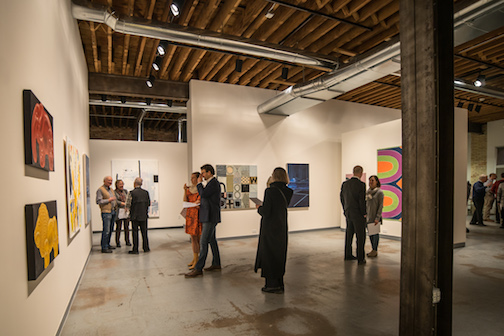 The Joseph Nease Gallery  just opened last year in Duluth.  Pictured is the opening of its second show, “Sweep.”  The exhibit continues through May..

Artists who plan to participate in the Spirit of the Wilderess community art exhibit “Chaos … Cracked … Creativity,” must bring their work to the Johnson Heritage Post by March 5 & 6. Artists are permitted to bring two pieces. The exhibit, which is open to community members of all ages, opens March 9 and runs through March 25. For more info, questions, contact creative@boreal.org or maryellenvicar@gmail.com 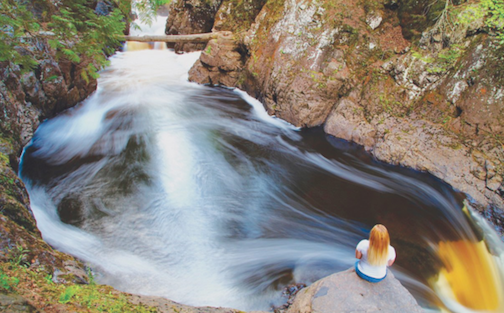 We found some interesting photographs this week. Here’s a sampling: Brrrrr. Roxanne Distad caught this Saw-Whet Owl wrapping its wings around itself, bundling up against the cold wind off Lake Superior. “Stalking in my boot prints” by Keith Crowley. Bird prints by Tracy Giesen Tredinnick. Tracy said this was taken in Yellowstone.

Here are some lovely landscapes. “Frozen on the Shore” by Sandra Updyke. 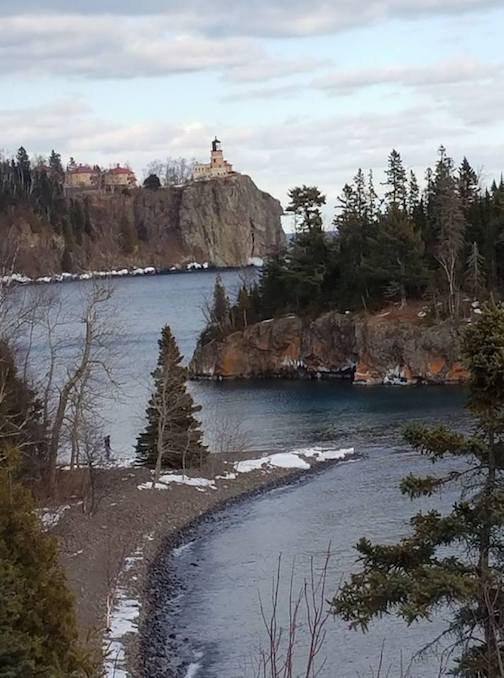 “Where is the Ice?” by Angela Plumbo. Morning Ice by Gregory A. Isrealson. “Hopscotch, anyone” by Scott Rockvam.

And last, but not least, this great shot by David Johnson. He calls it the saber-toothed bear tree.

(FYI: If you’d like to make a donation of any amount to keep NorthShore ArtScene alive and well, click on the button below. And thank you!)