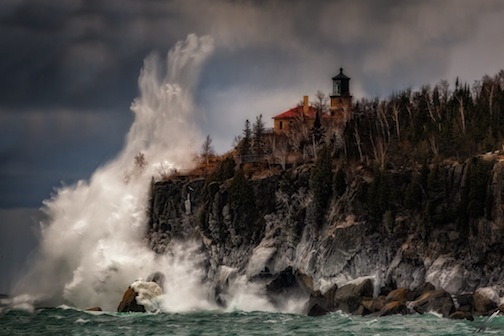 Earth Day is coming up this weekend, and with it one of the highlights of the spring art season in Duluth, the Art for Earth Day Gallery Hop. There are art exhibits in Grand Marais this weekend, too, and a great Artist Talk, as well as a Collaborative Beach Clean-Up. Meanwhile, everyone on the North Shore experienced earth, wind and water last weekend as a historic storm lashed the shore with spectacular waves. We found plenty of photos, which will be featured this week.

First up, though, is Shrek the Musical JR., the Annual Community Youth Play that opens at the Arrowhead Center for the Arts on Friday at 7 p.m. 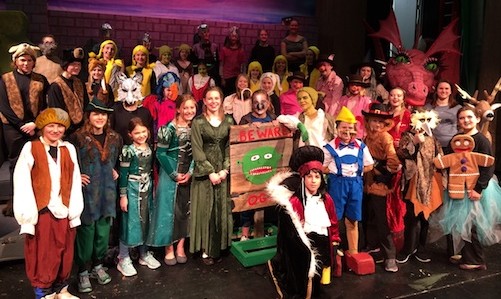 The cast from Shrek Jr. The musical opens at the Arrowhead Center for the Arts on Friday and runs for two weekends.

Shrek The Musical JR.,  is based on the Oscar-winning DreamWorks Animation film and Broadway musical.  It’s a “big, bright, beautiful world” as everyone’s favorite ogre, Shrek, leads a cast of fairy-tale misfits on an adventure to rescue a princess and find true acceptance.  Part romance and part twisted fairy tale, Shrek JR. is an irreverently fun show with a powerful message for the whole family.

Produced by the Grand Marais Playhouse and directed by Sue Hennessy, the play features a cast and crew of 46 youth in grades 3-8. Performances are at 7 p.m. Friday and Saturday and 2 p.m. Sunday, April 20-22 and April 27-29. Tickets are $10 for adults, $5 for youth and $1 for children. Advance tickets are strongly recommended and can be purchased at www.grandmaraisplayhouse.com

A ways down the road from Cook County, the American Craft Council Show opens at the St. Paul River Centre on Friday, with exhibits continuing through April 22. Local artists Dan and Lee Ross are in the show. They will have stone and ceramic sculptures, monoprints and (new!) glass pieces. 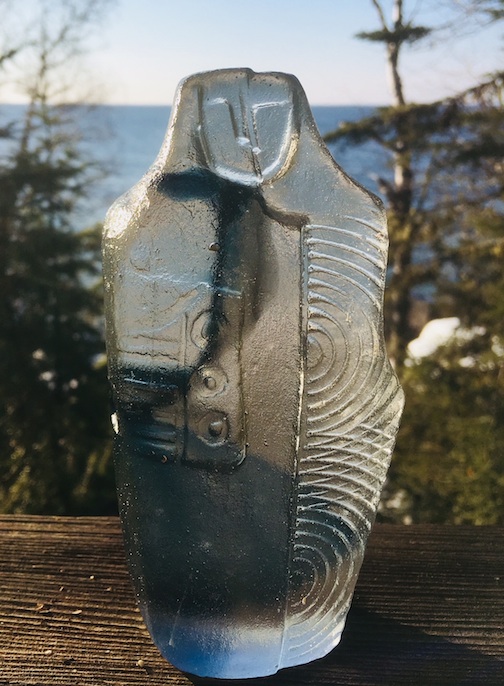 Lee Ross will have glass pieces in the show in St. Paul, the first time she has shown this work.

WDSE’s The Playlist crafted a video of the artists at work. Check it out.

Saturday will be a busy day.

The Grand Marais Art Colony will host an Artist Talk and Installation opening entitled “The Spaces Left Behind” at 1 p.m. on Saturday, featuring artist-in-residence Jonathan Herrera. 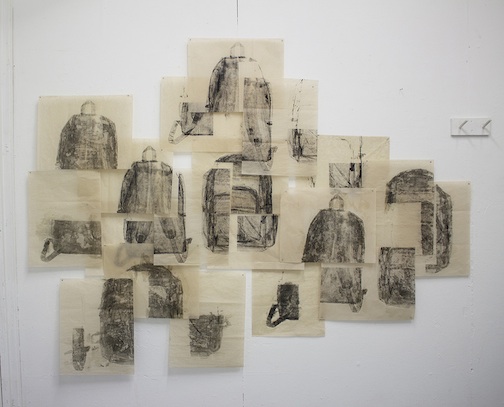 Herrera will complete his invited residency at the Art Colony by presenting a print-based installation surrounding issues of bodily disappearance and loss of identity. Through a social-political lens, he investigates the spaces left behind by bodies to reveal lived experiences, memory, and trauma, The Artist Talk is free. All invited.

Down at the Grand Marais Harbor, a Collaborative Beach Pick-up starts at 11 a.m., followed by free chili at Voyageur Brewing Co.. at 1 p.m., an Earth Day Rock Talk by Dr. John Green, also at Voyageur and a conservation movie, “A Plastic Ocean,” at the Grand Marais Public Library at 7 p.m. Other art-related Earth Day events, there will be a fish print art activity at the beach pick-up as well as a Cook County Soil and Water coloring contest. All invited to the day’s events. Free.

Gunflint Lodge will hold a “Cork & Canvas Painting Party” from 11:30 a.m. to 7:30 p.m. on Saturday featuring instructions on painting an acrylic landscape, lunch, dinner, snacks and wine. For more info and to register, call 218-388-2294.

The City of Duluth goes crazy for art this weekend as the annual Art for Earth Day Gallery Hop gets underway. There will be  special exhibits at a wide variety of venues throughout the day. Here’s a brief selection of what you might see. 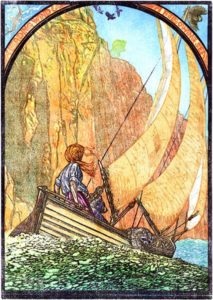 At Siiviis in Duluth, Rick Allen will introduce a new Trapper’s Daughter during the Gallery Hop. 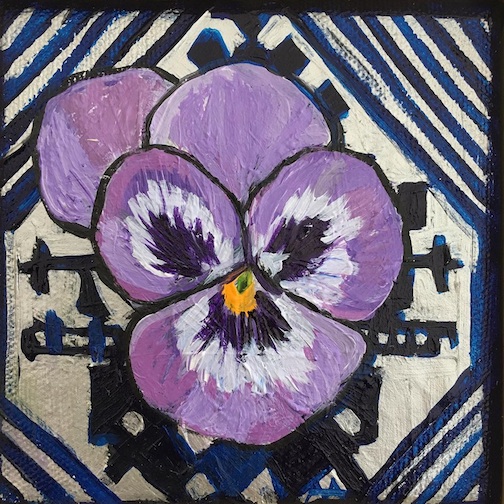 The Nordic Center in Duluth will open a new show, Ojibway & Nordic Flowers, Vines & Leaves: Honoring Mother Earth” featuring works by a variety of artists. The pansy, above, is by Alison Aune. 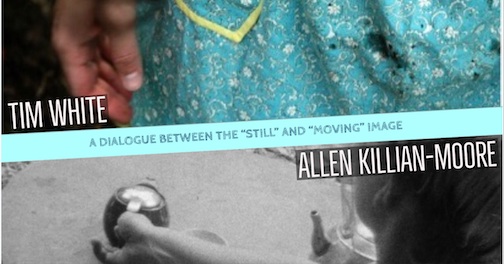 The Joseph Nease Gallery in Duluth will open a Photography Exhibition by Tim White and an art film installation by Allen Killian-Moore.in Galleries A and B.

A number of places will be open in Lincoln Park during the Gallery Hop, including Duluth Pottery, which just opened in its new location. The pottery/gallery will feature the work of Duluth Pottery’s owner, Karin Kraemer, as well as a selection of other works. 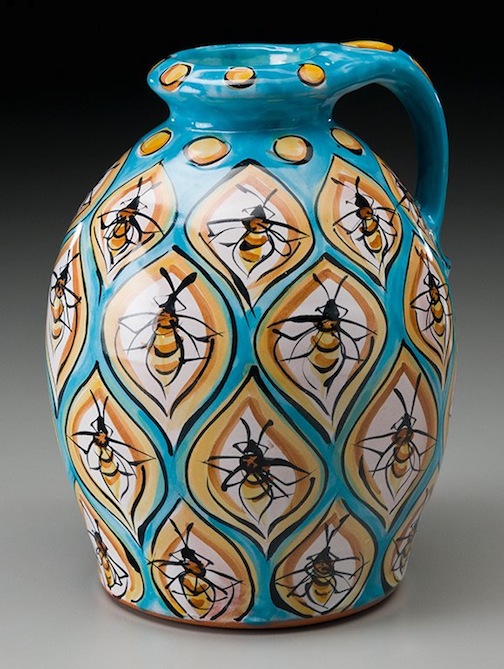 To see a complete selection, with photos, of participating galleries in the Gallery Hop, click here. 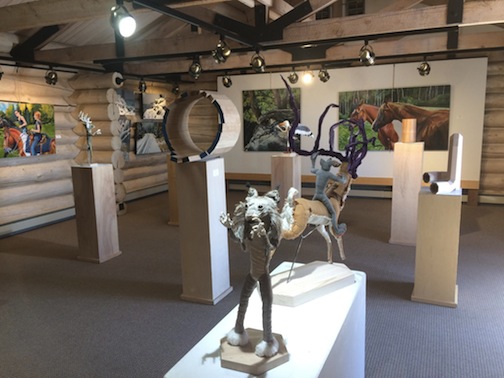 The Heritage Post is closed on Tuesdays. It is open from 10 a.m. to 4 p.m. Thursday through Saturday and Monday, and from 1-4 p.m. Sunday. 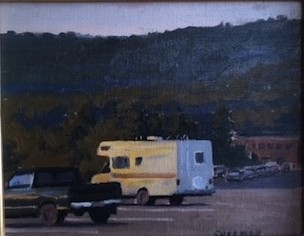 The Voyageur Art Club continues its exhibit at the Cedar Coffee House in Two Harbors. 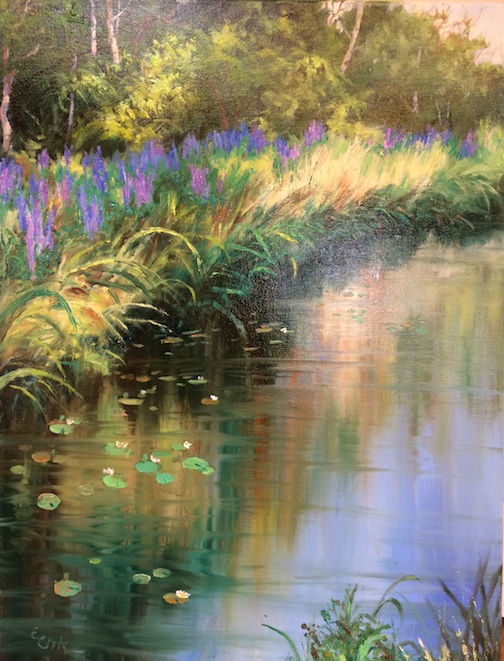 “Pond” by Elsie Cook, is at the Cedar Coffee House in Two Harbors.

The Tweed Museum of Art in Duluth is participating in the Gallery Hop. Here is one of the paintings you will see: 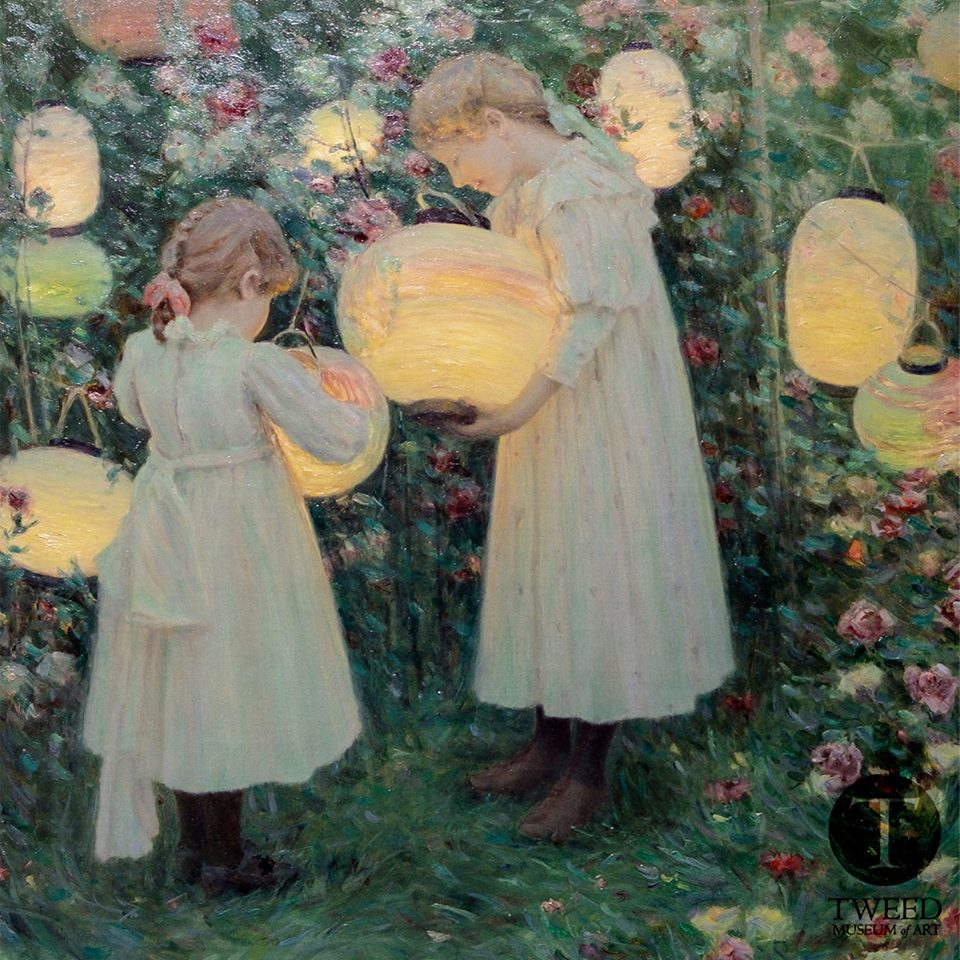 “Japanese Lanterns” by Luther Emerson Van Gorder, is one of the most popular paintings in the Tweed’s collection. 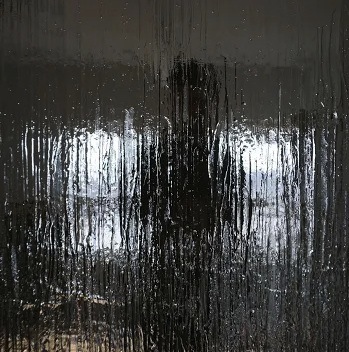 Next weekend, the Johnson Heritage Post will hold an opening reception from 5-7 p.m. on Friday, April 27 for “Found: 3 Views on Nature: A Group Exhibition of  Block Prints, Encaustic Paintings, and Mixed-Media Artworks.“ 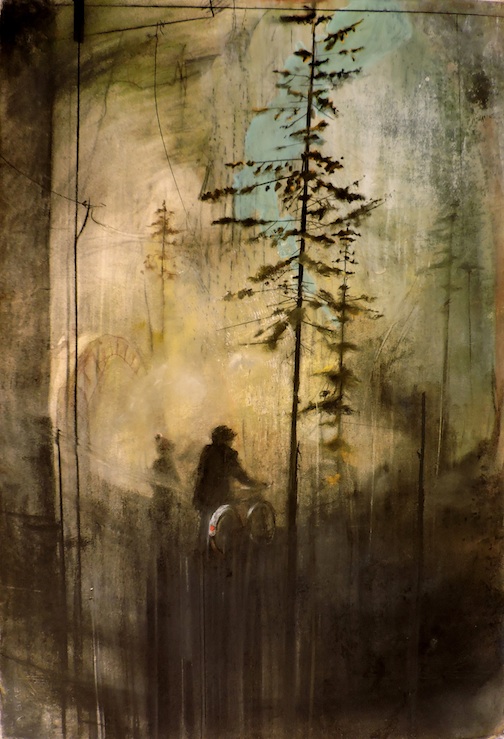 “Borealwlak” by Stephanie Moistre-Kotz, mixed-media, is one of the works in the upcoming exhibit at the Johnson Heritage Post.

“Found” will include works by block print artist, Stanley Leonard, encaustic painter, Bethany Kepler and mixed-media artist, Stephanie Molstre-Kotz. By the way, the Johnson Heritage Post has a call for artists to exhibit in 2019 and 2020. An application can be found here.

Master blacksmith, Cody Myers will be the resident instructor at North House Folk School , and will teach two workshops while he is here: The Basics of Blacksmithing” for individual students and “Families at the Forge,” for one adult and one child. To sign up, call North House at 218-387-9762. The registration deadline  for Cook County residents is April 25.  Non-residents can register after that date.

Here’s a video of Myers doing his work:

The Grand Marais Art Colony‘s Member Show is April 27 this year. Members who wish to submit work must do so by noon on Monday, April 23. The Member Show & Sale opens with a reception from 5-7 p.m. on Friday, April 27. The Annual Meeting will be at 3:30 p.m. For details, click here.

And now, for the photos. Let’s start with a few wildlife shots: 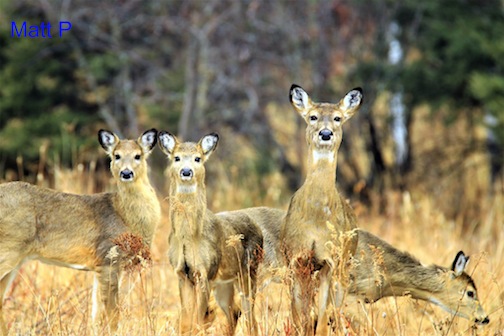 A family portrait by Matthew Pastick. 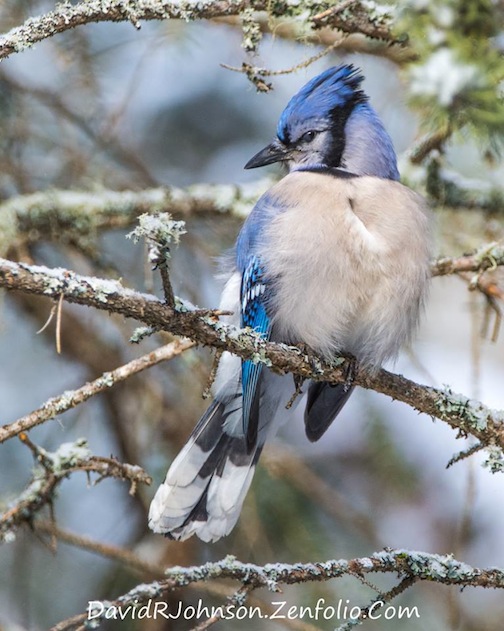 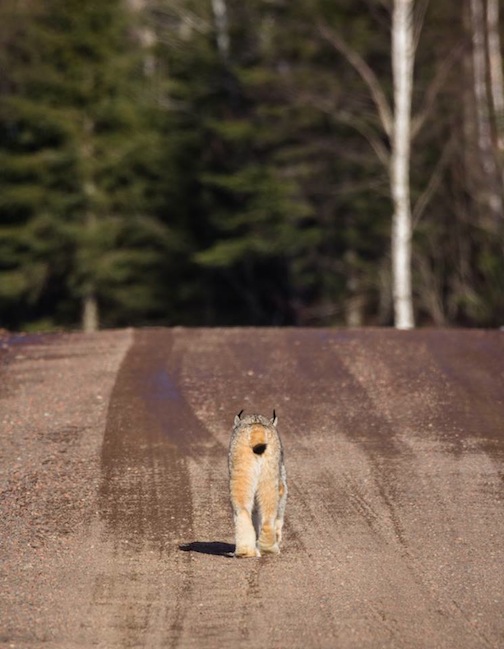 A nice evening for a stroll down the back roads by Thomas Spence.

And now, for some storm shots. 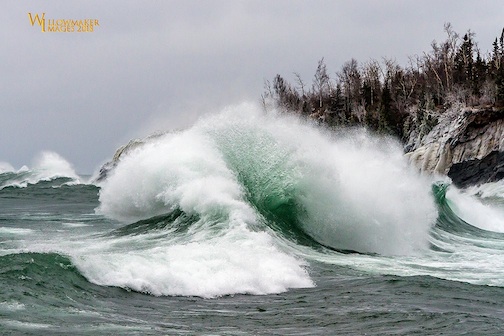 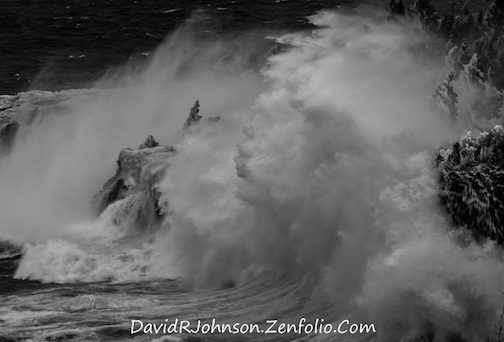 Faces in the waves by David Johnson. 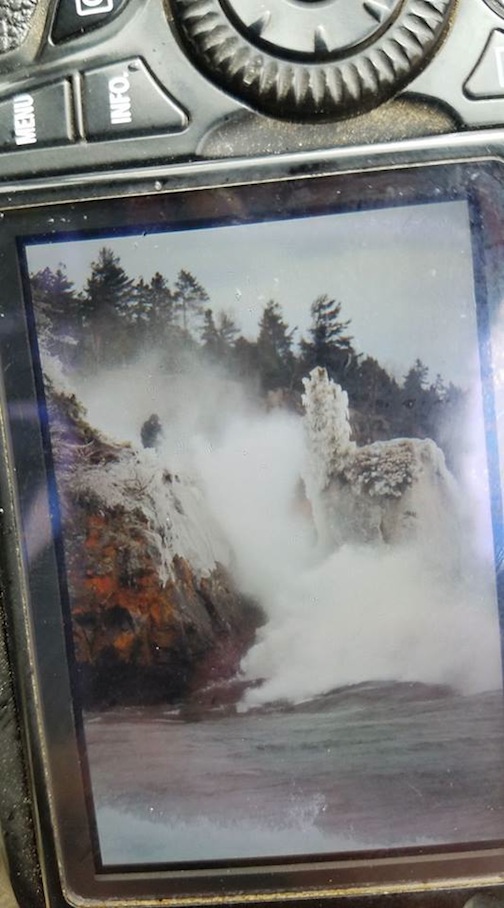 “Dude out shooting the Stack. Crazy” by Thomas Spence. 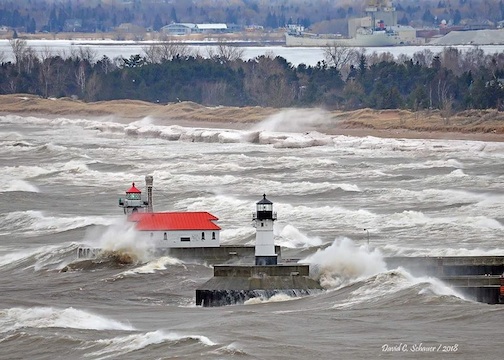 Aerial View of the Storm by Daniel Schauer. 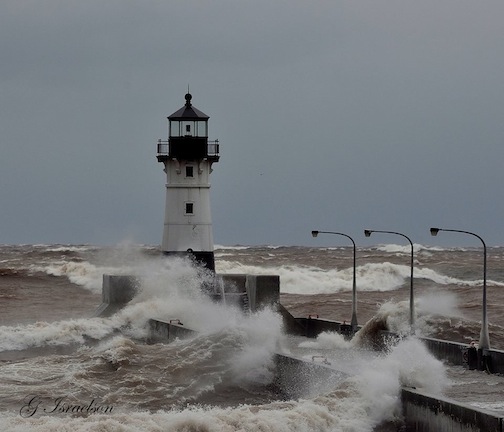 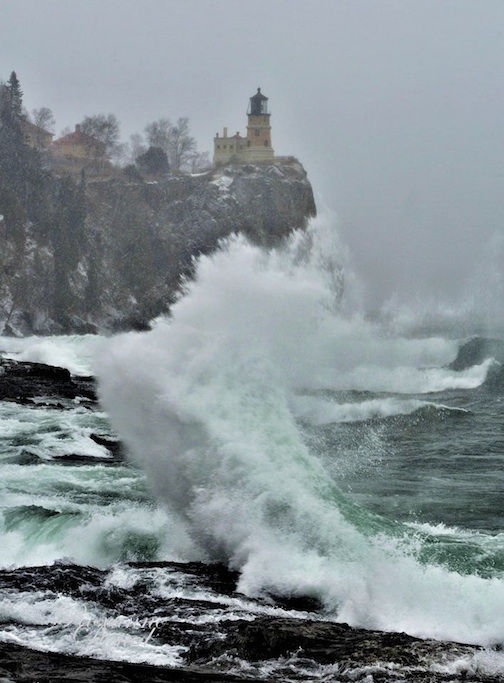 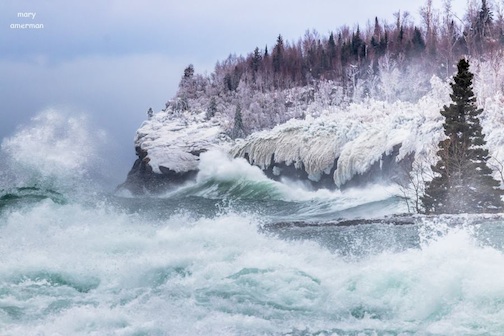 “Respect is Recommended” by Mary Amerman. 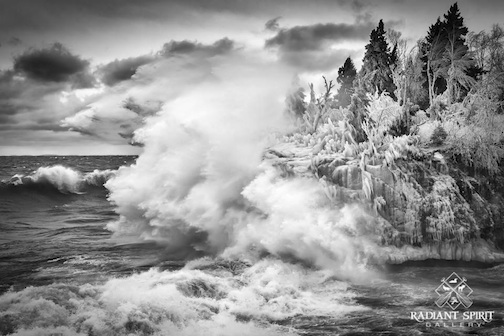 Tettegouche is a Frozen Photographers paradise by Dawn Lapointe. 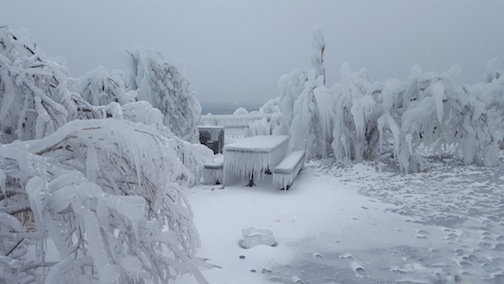 Campsite 19 at Split Rock Lighthouse… a little ice but no problem with mosquitoes by Lee Radzak. 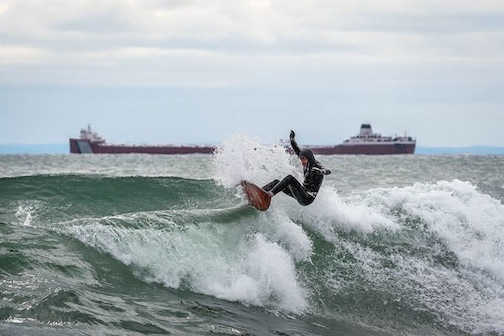 Dylan Graves and the “Roger Blough” by Christian Dalbec. 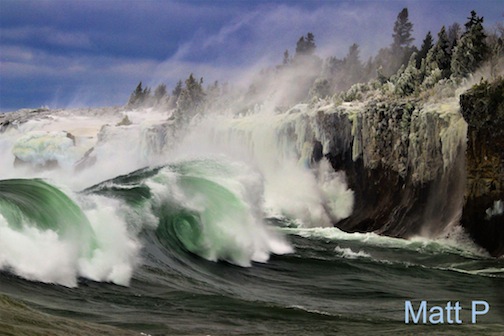 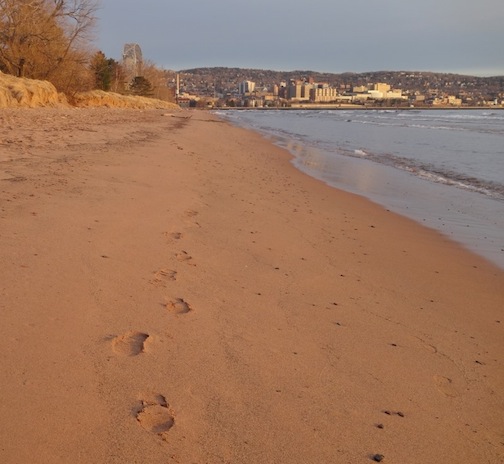 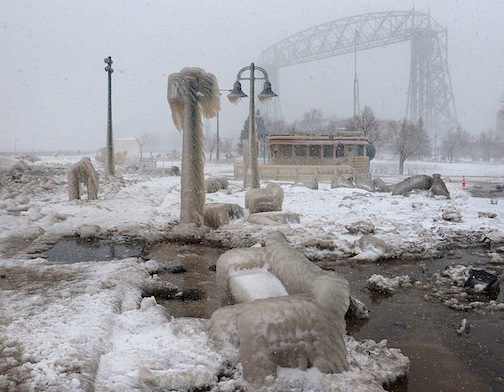 “After the storm” b Andrew Krueger.

Have a great weekend, everyone! And keep dry.