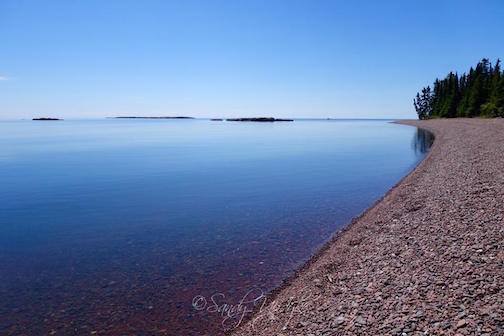 “Look at the lake! Couldn’t be any prettier” by Sandra Updyke.

Summer appears to have finally arrived, and just in time! The Grand Marais Arts Festival is this weekend, and it looks like it’s going to be stellar weather with lots of great art and activities to enjoy. 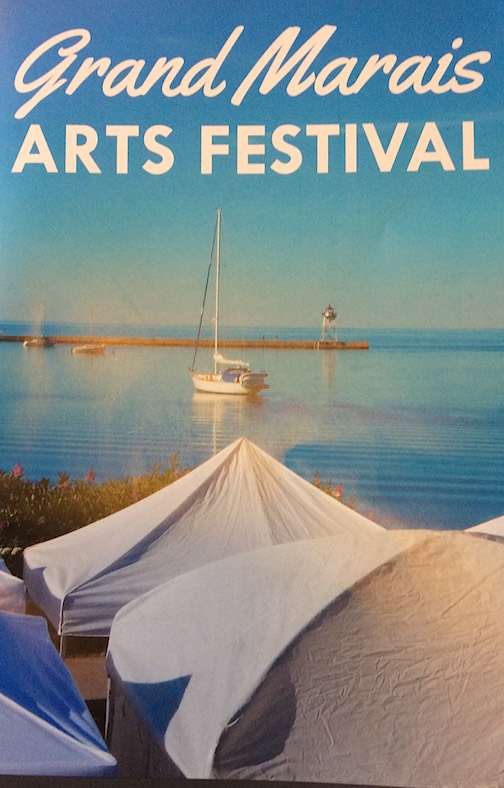 The Arts Festival is more than just artists displaying their work, too. There are all kinds of on-going activities at the Grand Marais Art Colony‘s tent over the weekend, including screen printing a T-shirt or tote (both days), , drawing the lighthouse, creating a superhero, mask-making and more,  as well as a number of demonstrations. To see the complete schedule, click here. 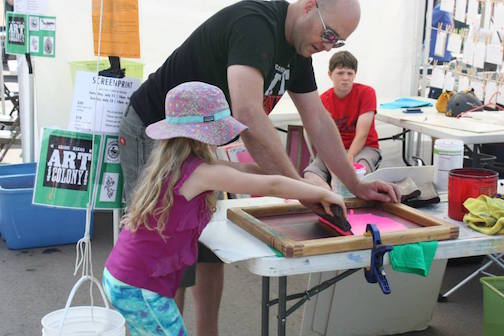 The Art Colony also holds a Clothesline Art Sale as fundraiser for the organization featuring small 5 x 7-inch artworks crafted by local and regional artists. This is always a fun part of the festival, since the artworks are only signed on the back, making the art choice one of “I-like-this-one” and then a pleasant surprise when the work is turned over and the artist is revealed. They are $35 each.

There’s lots going on in the downtown neighborhood, too. WTIP Community Radio with Jay Andersen and  Roger Linnehan will be broadcasting live from the festival on Saturday morning and The Northwoods Fiber Guild will be demonstrating on the lawn of the Johnson Heritage Post on Saturday.

There’s live music in Harbor Park, too. Check the music schedule below.

Also, Mark Lusardi from Continental Clay Co. in Minneapolis will be doing raku pottery demonstrations across from Java Moose on Saturday and Sunday. Participants can pick a pot, glaze it and watch it being fired. Prices vary, according to the size of the pot. And Joy & Company will be holding art activities all weekend.
It’s a great weekend for the arts in Grand Marais. No doubt about that. See you there!

Meanwhile there’s lots of other activities going on in the county, too.

The Arrowhead Sketchers will be at the Rec Park campground on Thursday from 5-7 p.m. to sketch the campground and nearby North House Folk School. Ellen Dolan is host. All invited to bring their notebooks, pencils and paints and sketch.

Tettegouche State Park will open a new exhibit in the Great Hall with a reception at 7 p.m. on Thursday. This month’s exhibit features paintings by Kat Corrigan. 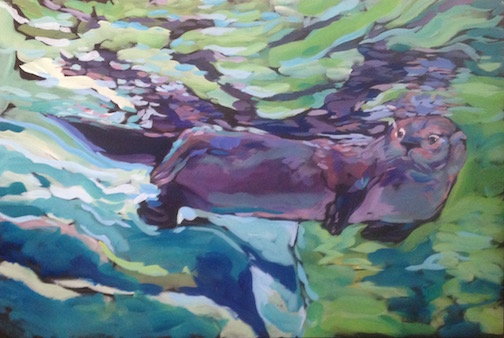 On Saturday, Last Chance Gallery in Lutsen will host a bronze pour at 4 p.m. at the gallery. All invited to see this fun demonstration that combines fire and molten bronze to create art.

Then at 7 p.m.on Saturday, author Ann Marie Mershon will give a reading at Drury Lane Books. Mershon pent nearly five years teaching in Turkey, struggling with loneliness as she adapted to a new culture, and finally coming to love the Turks and their world. 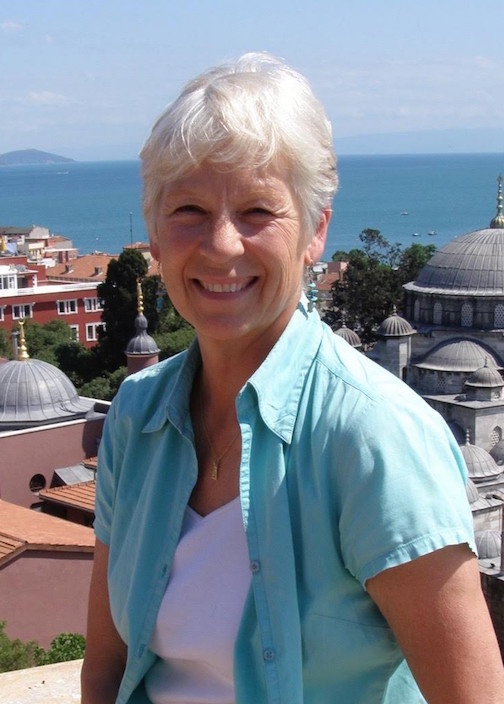 Ann Mershon will read from her memoir, “You Must Only To Love Them: Lesson Learned in Turkey” at Drury Lane Books at 7 p.m. Saturday.

She’ll be reading from her memoir, “You Must Only to Love Them, Lessons Learned in Turkey.” Discussion on Turkey’s changing political and social climate will follow.

Also on Saturday evening, Dom Flemons, co-founder of the Carolina Chocolate Drops, will be in concert at the Arrowhead Center for the Arts at 7:30 p.m. You can get a preview of his music by listening to WTIP Community Radio at 3 p.m. on Saturday. 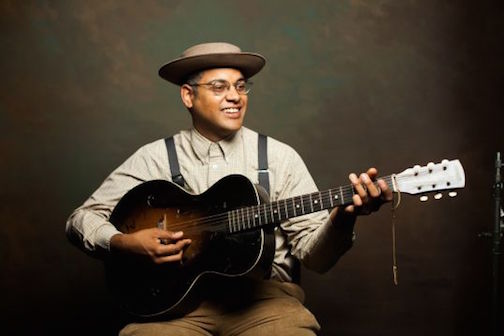 Dom Flemons will be in concert at the ACA at 7:30 p.m. Saturday.

A Grammy-Award-winning musician, singer-songwriter, and slam poet, Flemons carries on the songster tradition, striving to mix traditional music forms with a contemporary approach to create new sounds that appeal to wider audiences.

He began his career as a performer in Phoenix, Ariz., where he produced 25 albums for singer-songwriters and slam poets. In 2005, Flemons co-founded the Carolina Chocolate Drops, an African-American string band that won a Grammy for its 2010 album “Genuine Negro Jig.”
Today, Flemons tours throughout the United States as The American Songster. In February 2016, he performed at Carnegie Hall for a Tribute to Lead Belly. In September 2016, he performed at the opening ceremonies for the National Museum of African American History and Culture in Washington, D.C.

In addition to the evening concert, the North Shore Music Association will also host two educational outreach events by Flemons at the Grand Marais Public Library on Saturday, July 8. Both of these events are free and open to all ages: American Folk Music History Talk & Demo at 1 p.m; and “Rhythm Bones” workshop at 2 p.m. (rhythm bones provided; participants welcome to bring guitars, fiddles, banjoes, etc. to jam.)

On Sunday, local author Reed Schmidt will give a Full Moon Reading at Drury Lane Books at 8 p.m. Under the July moon, author Schmidt will read selected poems by selected poets. Following each poem, an intimate, humorous or tangential letter will be read. The letters were written by Reed in response to the poet’s work. If you have letters, notes, grocery lists or poems to read, please bring them to share. You are invited to read them at any point during the reading. All invited. Free.

The Minneapolis College of Art & Design exhibit at the Johnson Heritage Post continues this week, featuring a variety of work from the college’s alumni. 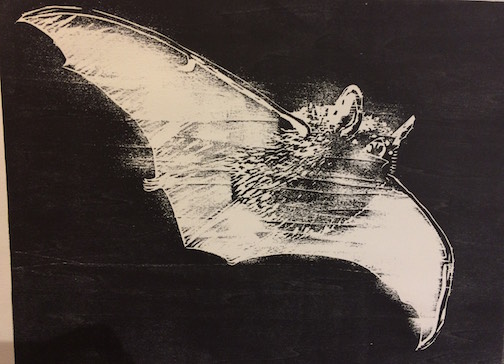 The Heritage Post is closed on Tuesdays. It is open from 10 a.m. to 4 p.m. Tuesday through Saturday and Monday and from 1-4 p.m. on Sunday.
The Tweed Museum of Art continues its exhibit of notable photographs of people taken by a wide variety photographers. This week, we feature a historical photo “Taos Water Girls” bu Edward Sheriff Curtis. 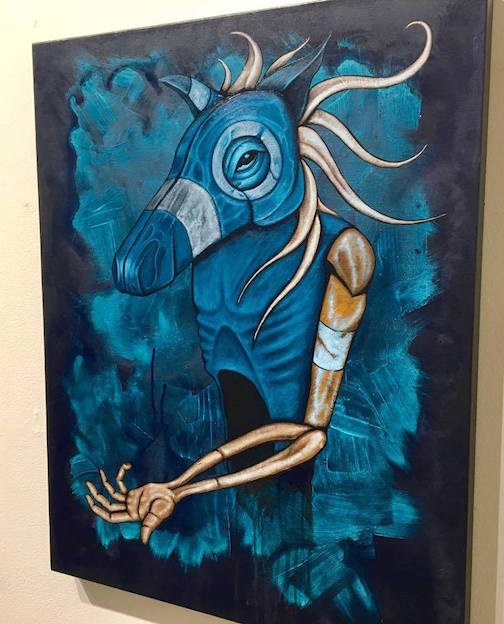 Jonathan Thunder is exhibiting his paintings and videos at the Duluth Art Institute.

The Thunder Bay Art Gallery continues its exhibit “The Perspective from Here: 150 Artists from the North.”

Artwork from the Thunder Bay Art Gallery exhibit: The Perspective From Here: 150 Artists from the North.

Frozen Britches (Tom Van Cleve and Eric Hahn) play Irish music at Cascade Lodge Pub the from 6-8 p.m. the second and fourth Thursdays of every month. There are often special guests, too. Next week, July 13, Jim Aman, a penny whistle virtuoso, will play with the group. All musicians are welcome to sit in.

Marty Harris will open an exhibit at the Hopkins Center for the Arts on Friday, July 14, with a reception from 6-8 p.m. Entitled “Sidewalk to Superior, “it features work he did while exploring the North Shore.

Stars of the North Music Festival, a fundraiser to raise money for a music lesson program for area youth and music instructors, will be held at Harbor Park July 28. The event is organized by the Grand Marais Music Collaborative. Stay tuned for details. 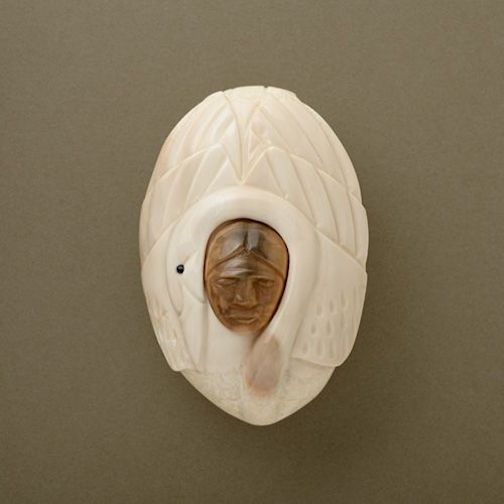 “Swan Spirit Orb” by Ron Apangalook is at Sivertson Gallery. 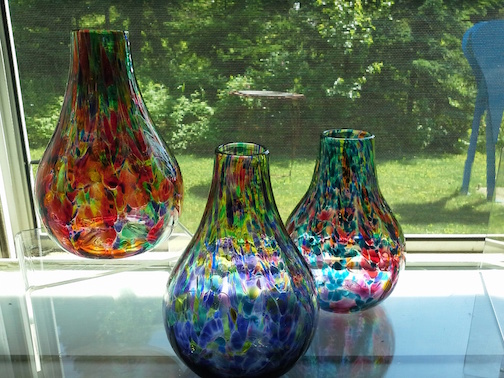 Jewel-like vases by Cecil and Lisa McKenzie are at Last Chance Gallery in Lutsen. 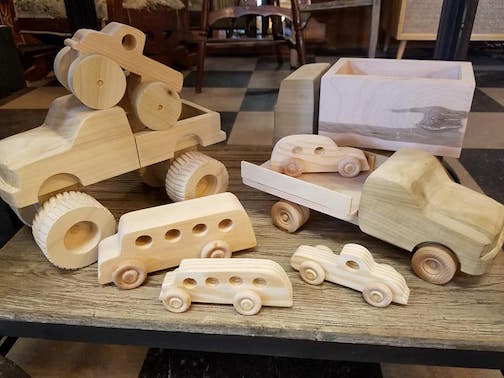 Joy & Company has a great selection of wooden hand-carved vehicles. 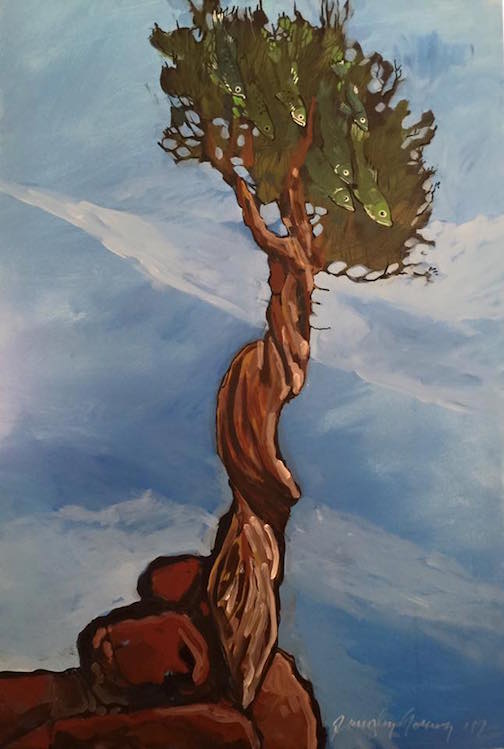 Timothy Young has new work at Kah-Nee-Tah Gallery in Lutsen. 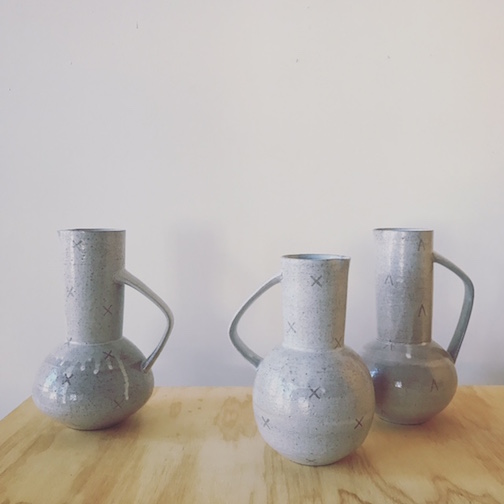 And here are some of the photos we found this week: 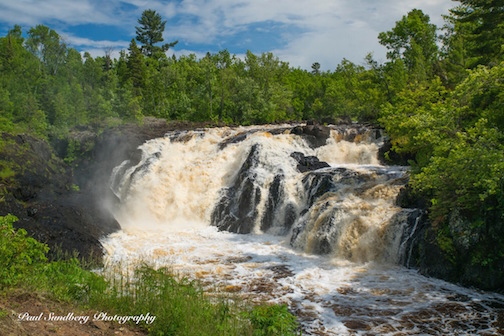 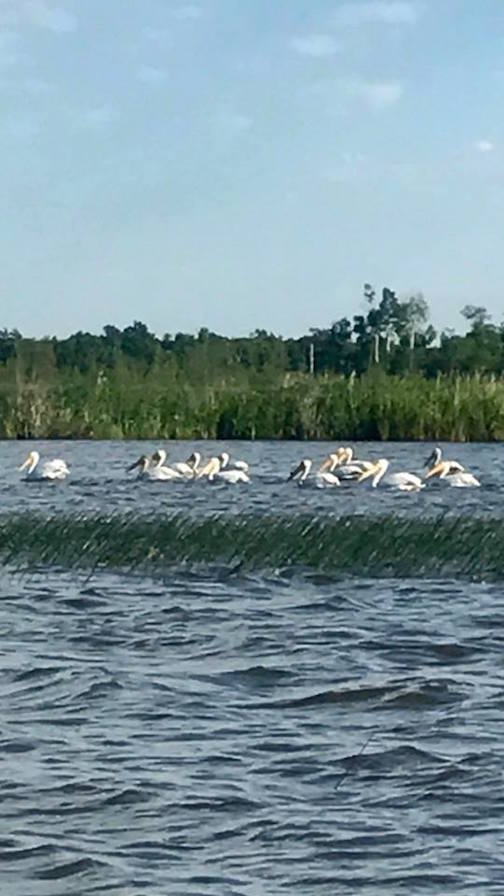 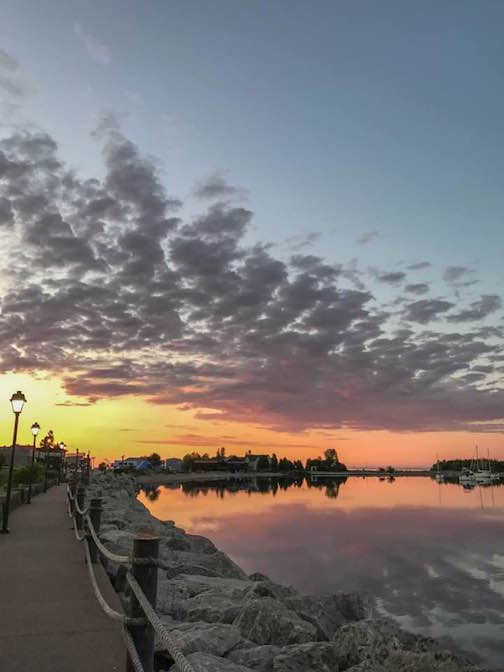 Here are two takes on a foggy day: 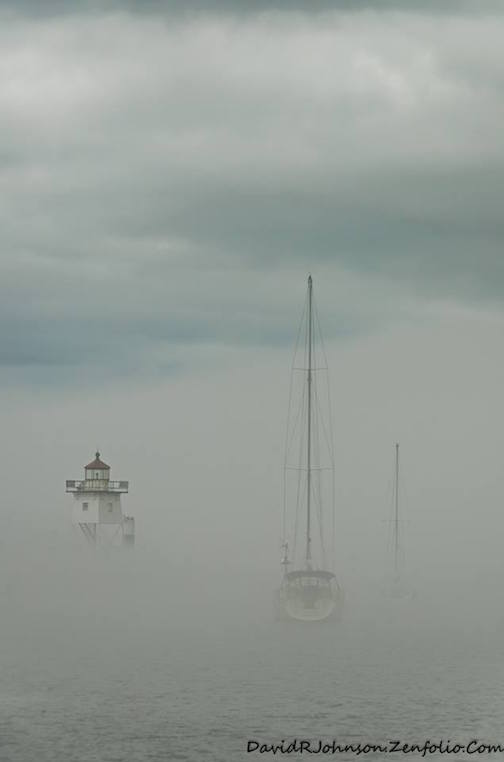 “Floating in the Fog” by David Johnson. 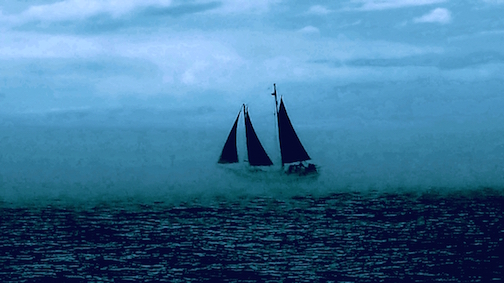 We found lots of fireworks photos. Here are a few. 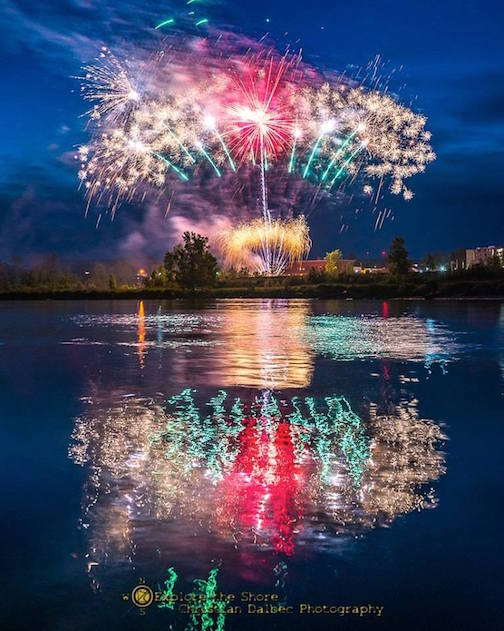 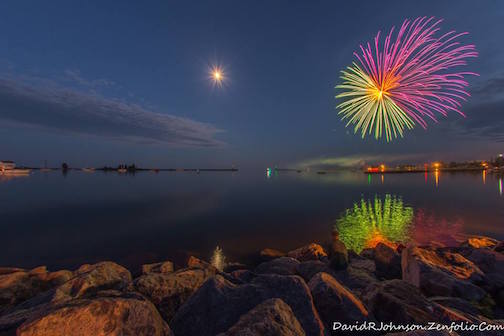 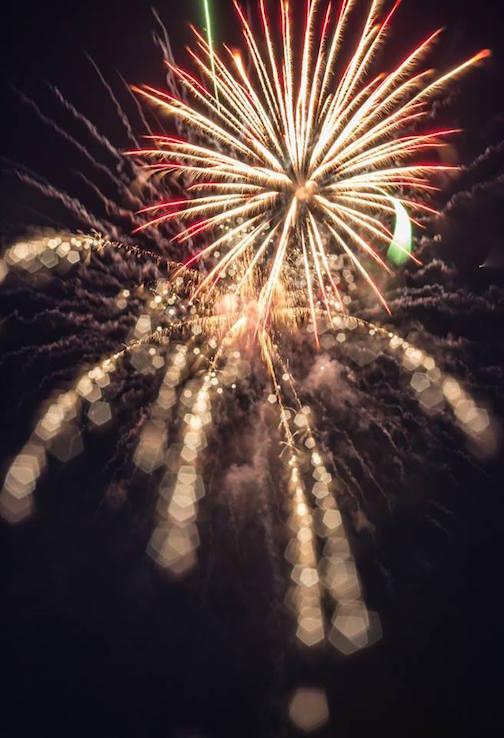 Here’s a great shot, too. 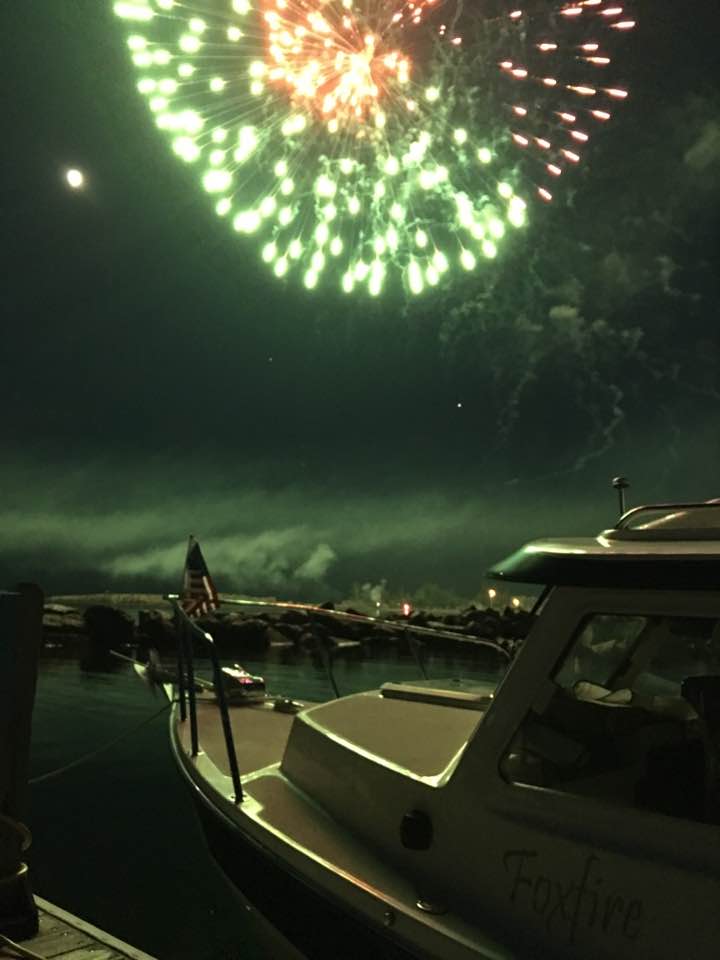 “The moon, the fireworks, the boat, and thee,” by Todd Miller.

FYI: Donations are now being accepted to help support NorthShore ArtScene. Thank you!

Next post: Art Opportunities, Music & An Exhibit Or Two