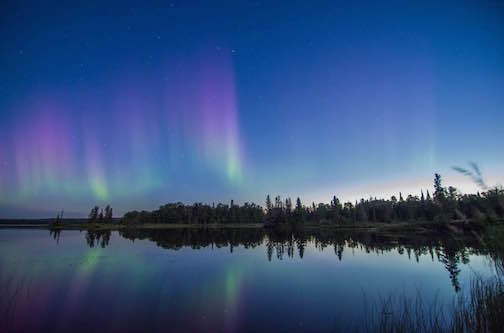 Look forward to a busy weekend because there is lots to do. The Summer Theater Festival begins on Thursday, there’s an art exhibit opening at the Johnson Heritage Post on Friday, and Saturday is all scheduled up with demos, art talks and more.

First up is the Arrowhead Sketchers, an open group of artists who like to draw and paint outdoors that meet every Thursday afternoon. 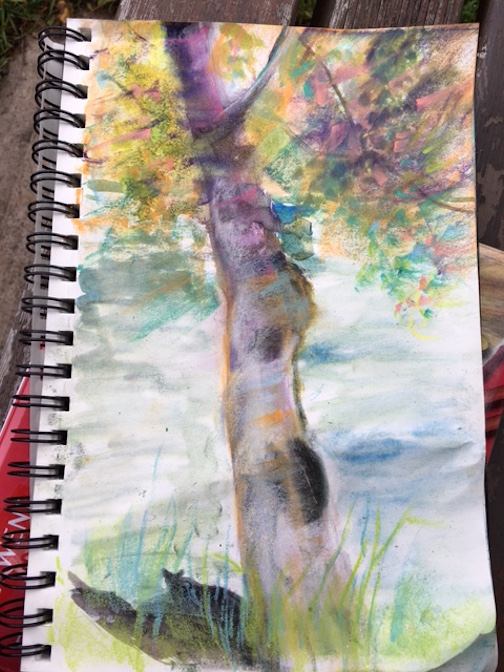 A drawing made by an Arrowhead Sketcher last week.

The sketching event is open to the public. This week, the Sketchers will meet at the parking lot at the U.S. Coast Guard Station. From there, they will have access to Artist’s Point, activity and boats in the harbor as well as views of Grand Marais.  Grab your pencils and sketchbook and join the group from 5 to 7 p.m. Free.

On Thursday night, the Grand Marais Summer Theater Festival opens at the Arrowhead Center for the Arts with the comedy “The Game’s Afoot.” Winner of the 2012 Mystery Writers of America Edgar Allen Poe Award, this who-done-it mystery will keep everyone laughing. 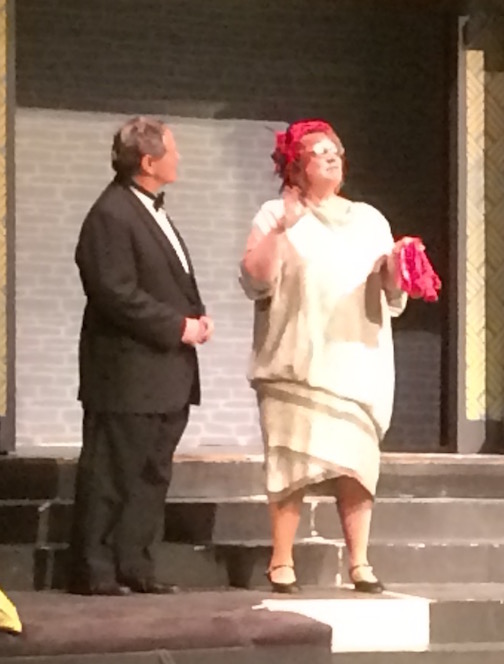 A rehearsal scene from “The Game’s Afoot.” Pictured are Gary Latz and Diane Stoddard.

The Summer Theater Festival also includes alternating performances of the  musical “The Pajama Game.” It opens on Friday night. “The Pajama Game” was awarded the 1955 Tony for Best Musical and, more than half of a century later, claimed the award for Best Revival of a Musical, proving that the story is truly timeless. The play is brimming with songs and dances that have become musical theater standards, including “Steam Heat” and “Hernando’s Hideaway. ” The cast includes Mark Abrahamson, John Bragstad, Susan Bragstad, Karen Blackburn, Kate Fitzgerald, Hilja Iverson, Thomas Stamps, Louise Reavis, and Karina Roth with special guest appearances by Christine Curtis. The first performance of “The Pajama Game” is on Friday night at 7 p.m.

The plays will be performed on alternate nights, Thursday through Saturday and Sunday afternoons through Aug. 13. To see the complete schedule, click here.

If you’re in Duluth on Thursday night, check out Jonathan Thunder’s film screening at Teatro Zuccone on Superior Street at 7 p.m. 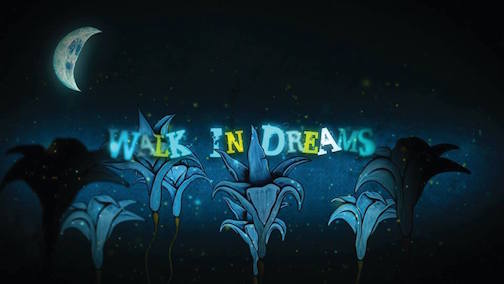 Jonathan Thunder will have a film screening at Teatro Zuccone in Duluth on Thursday at 7 p.m.

Thunder is currently exhibiting his work at the Duluth Art Institute. 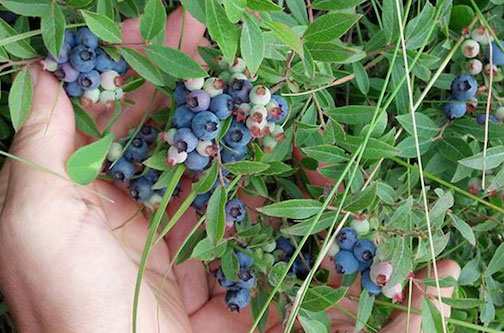 Blueberry pickers can submit their fruit to weigh stations at Bearskin Lodge, Golden Eagle Lodge, Hungry Jack Outfitters, Rockwood Lodge, Tuscarora Lodge, Gunflint Lodge and Chik-Wauk Museum & Nature Center, all of which are along the Gunflint Trail. Berry pickers will be able to submit their biggest blueberry at these locations Fridays through Sundays during the contest period. In addition to prizes for the biggest blueberry, all submissions will be entered to win randomly selected prize drawings. Prizes range from free canoe rentals to slices of blueberry pie.

Also on Friday, Crazy Chester, a Twin Cities band that features classic music by artists like The Allman Brothers, Neil Young, The Band, The Rolling Stones, to name afew, will be on WTIP’s The Roadhouse, before playing at the Gun Flint Tavern. 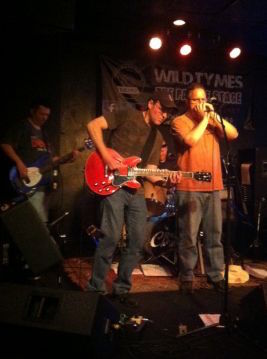 Crazy Chester will be on The Roadhouse on Friday before playing at the Gun Flint Tavern.

The Roadhouse airs from 5-7 p.m. on Fridays.

Then, on Friday night, the Johnson Heritage Post opens a new exhibit entitled “Threads of Time and Place: Marie Westerman and Jill Ewald.” Westerman is a fiber artist who does pictorial weaving. Ewald is an artist who works with many mediums including oils, graphite, conte crayon, encaustic and charcoal, and recently, thread. 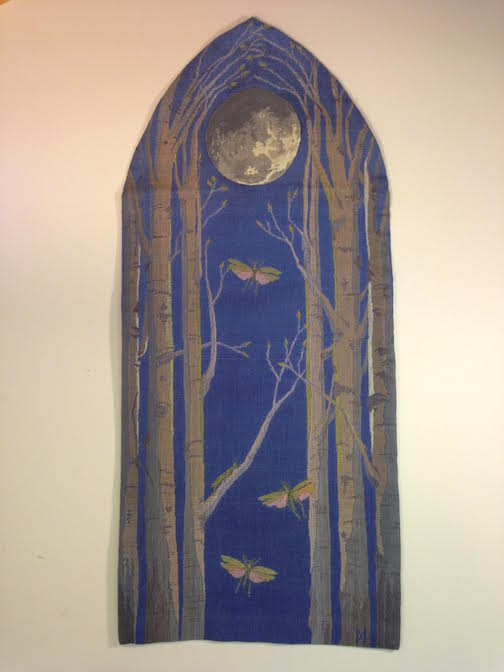 The opening reception for “Threads of Time and Place” is from 5-7 p.m. Friday. The Heritage Post is open rom 10 a.m. to 4 p.m. Wednesday through Saturday and Monday, and from 1-4 p.m. Sunday. It is closed on Tuesdays.

Also on Friday night, Voyageur Brewing Co. will be screening outdoor films as part o the North Shore Water Festival. he films include: “Superior Dream ,”  “When the Waves Call ” and “Cold Love.” Admission is $10. All invited. For more info about the Water Festival, click here.

Saturday kicks off with the Cook County Market, which is held in the parking lot at the Senior Center from 9 a.m. to 1 p.m. featuring a wide variety of crafts by Cook County artisans. Baked goods, including artisan breads, homemade jams and more are also featured.

The North Shore Water Festival will be held on the harbor all day on Saturday with lots of watercraft to try out, paddle board yoga and more.

Saturday afternoon is really busy this week. The Grand Marais Art Colony‘s Saturday’s in the Studio will feature Cila Walford, who will demonstrate watercolor resist painting. The demo is at 1 p.m. All invited. Free.

The West End Garden Club’s annual Flower Show will be at the Birch Grove Community Center from 1- 5 p.m. featuring beautiful flower arrangements as well as refreshments. All invited.

And then, at 3 p.m., the Betsy Bowen Studio & Galleries will host an artist talk by porcelain artist Jeremy Vaughn. Entitled “Travling with Porcelain: From Jingdezhen, China to the Big Lake,” Vaughn, who has been living and working in Jingdezhen, China, one of the centers for porcelain pottery. He will have new work at the gallery and talk about his artistic process, making porcelain forms inspired by Lake Superior using traditional Chinese porcelain methods. All invited. Free.

And at 4 p.m., there will be a Bronze Pour at Last Chance Gallery in Lutsen.

On Sunday, join author Mark Neuzil as he discusses his newest book, “Canoes: A Natural History in North America” at Drury Lane Books at  5 p.m. Neuzil will give an overview of the story of the canoe, that singular American artifact so little changed over time. 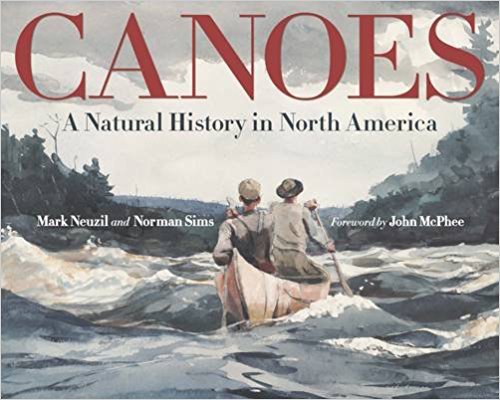 Author Mark Neuzil will talk about his latest book at Drury Lane Books at p.m. Sunday.

Featured in the book are canoes old and new, from birch bark to dugout to carbon fiber; the people who made them; and the adventures they shared. With features of technology, industry, art, and survival, the canoe carries us deep into the natural and cultural history of North America. The event is indoors at the bookstore. All invited. Free.

Ernest Miller’s Artist Talk on Wednesday, July 26, has been cancelled.

The opening reception for Plein Air Duluth was held at Blacklist Beer in Duluth last weekend. Joni Jurek won the 1sst place award with her painting “Great!Lakes Candy Kitchen!” The Candy Kitchen is located in French River. Artist Frank Sander created a video about the painting. Check it out here.

The Tweed Museum of Art continues its retrospective ceramic exhibit through Aug. 27. 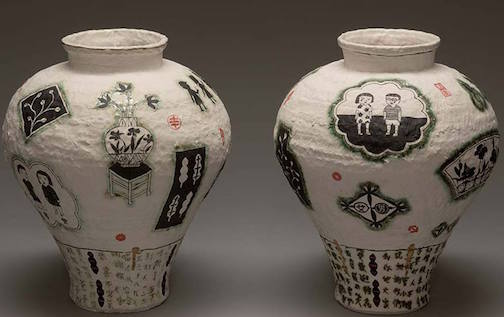 Beth Lo’s “What We Pass On (Inheritance Jars) are in the “Call +Response” exhibit at the Tweed Museum of Art in Duluth.

The Tweed is also featuring a photography exhibit this summer entitled “1000 Words.” Here’s one of the images from that show. 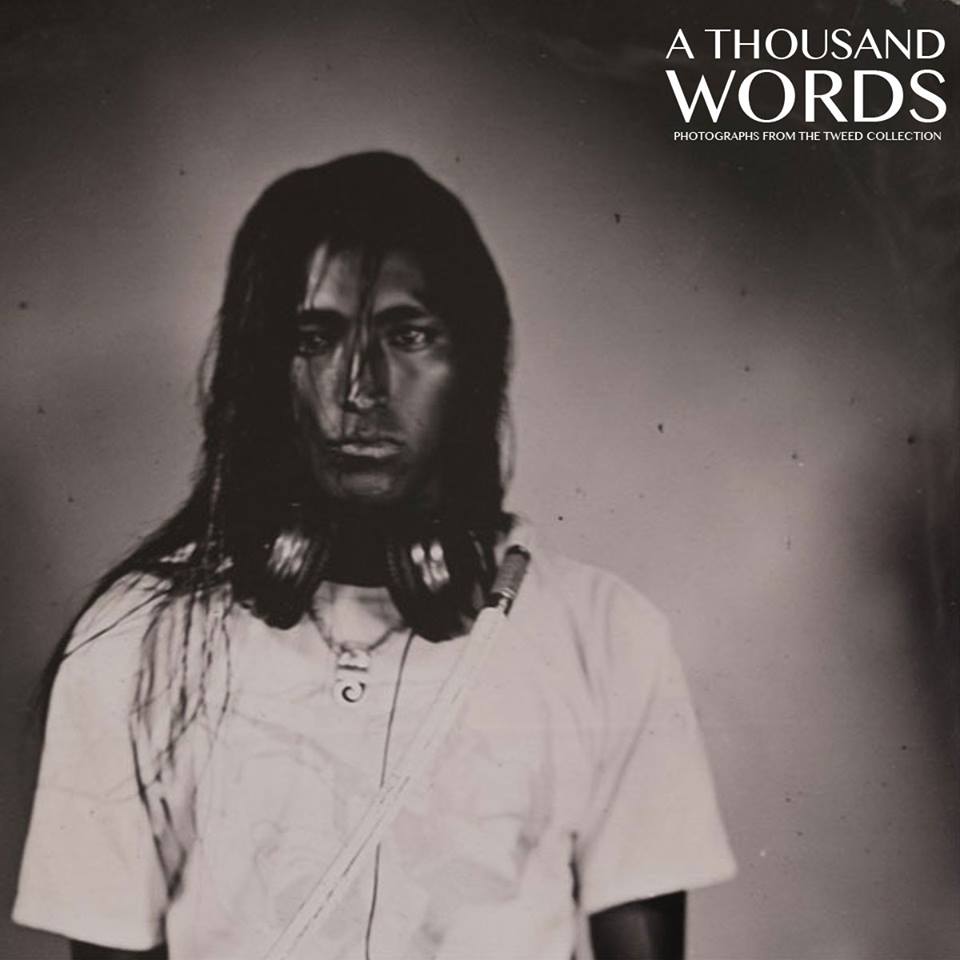 In Thunder Bay, the Definitely Superior Art Gallery continues its 29th anniversary Members Show at the gallery, as well as installations and videos by two Vancouver artists. 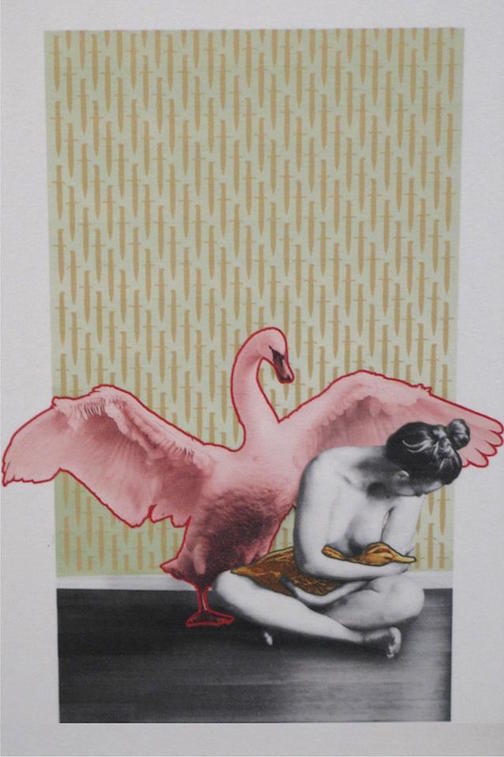 “Pieta,” print by Vicki Lundmark is at the Definitely Superior Art Gallery.

The exhibits continue through Aug. 12.

At the Thunder Bay Art Gallery, the exhibit “The Perspective From Here: 150 Artists From the North” continues through Sept. 25.

One of the installations for the exhibit “The Perspective From Here: 150 Artists From the North ” at the Thunder Bay Art Gallery. 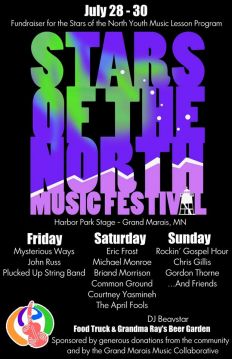 Stars of the North Music Festival is next weekend in Harbor Park.

The Stars of the North Music Festival is a fundraising music festival that will be held in Harbor Park July 28-30. The 3-day event starts in the afternoon on Friday with a mix of local talent, both electric and acoustic, carries through the day and early evening on Saturday with the same mix, and culminates in a “Rocking Gospel Hour” on Sunday, ending by about noon.  The music festival is sponsored by the North Shore Music Collaborative and the concert will raise funds for a youth music program.

Birchbark Books and Gifts will host a booksigning with author Dr. Roger MacDonald on Saturday, Aug. 5  from 2-4 p.m. MacDonald’s books include: “A Country Doctors Casebook,” “A Country Doctor’s Chronicle: Further Tales from the North Woods” and “Babe: The Remarkable Family of Paul Bunyans Blue Ox.” All invited.

The Duluth Art Institute has put out a call for art that honors death and works through the experience of grief to be exhibited at the DAI Nov. 4 as part of the annual All Souls Night held in and around the Depot. Works in all media will be considered.
To apply,  submit up to three images and a brief (200 word) statement describing your work and how it deals with grief. Submissions can be made here. The submission deadline is Aug. 15. 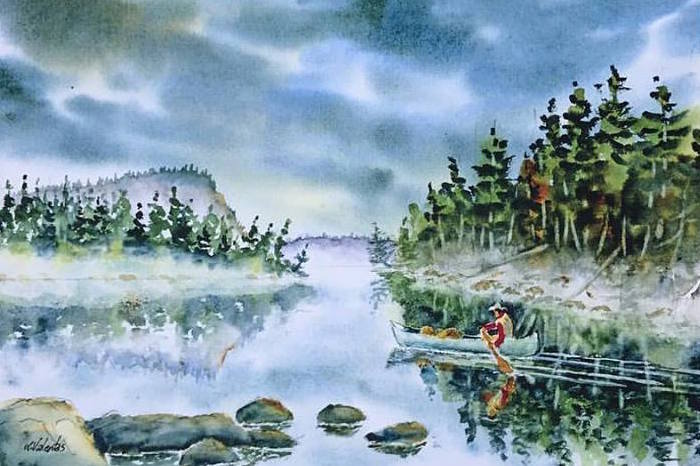 “Hungry Jack Lake,” watercolor, by Ken Valentas is at Kah-Nee-Tah Gallery in Lutsen. 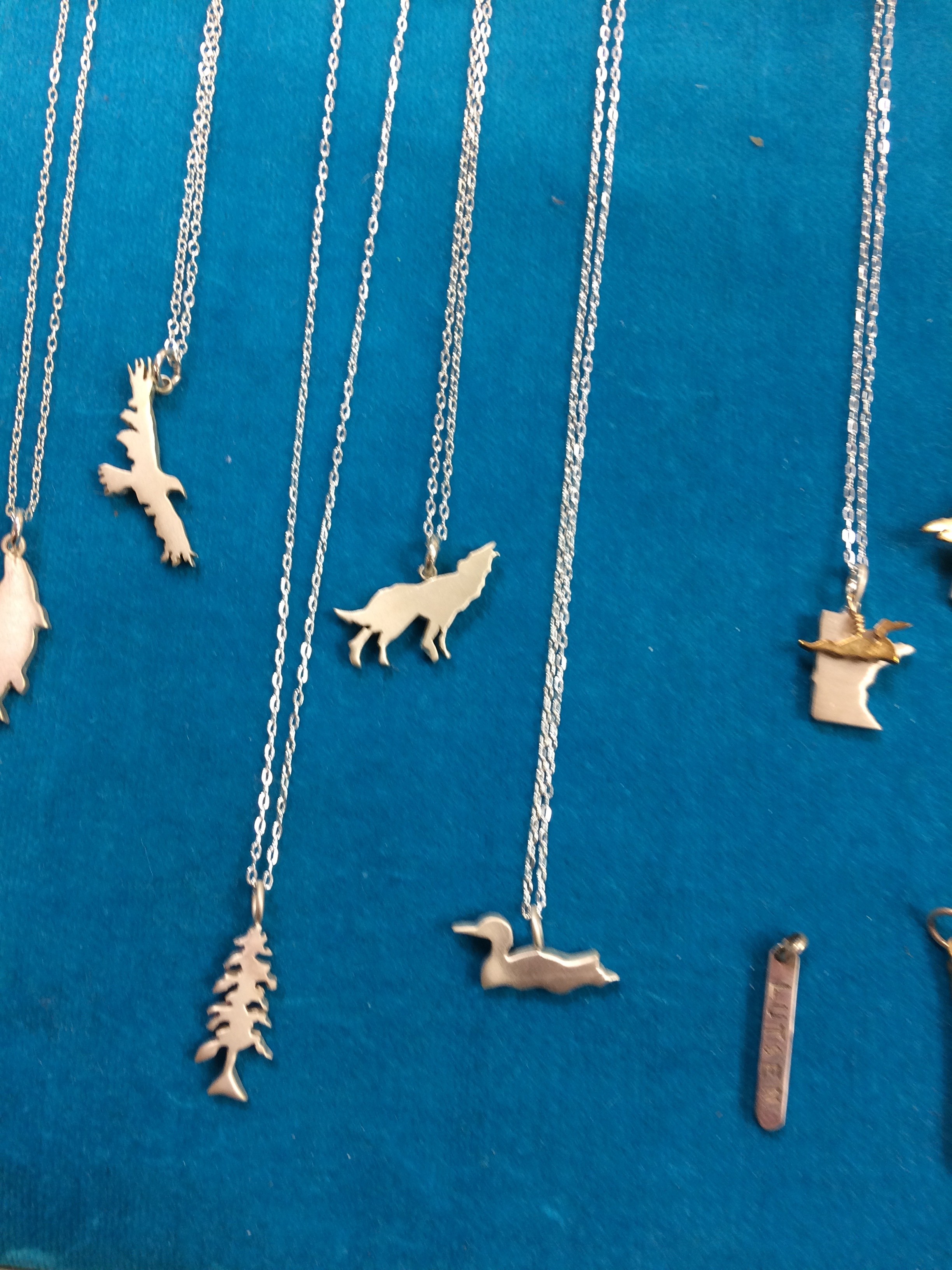 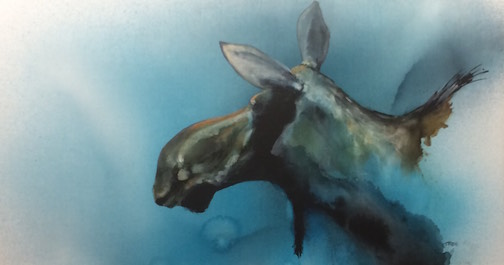 “In the Blue Light” by Tim Pearson is at Sivertson Gallery. 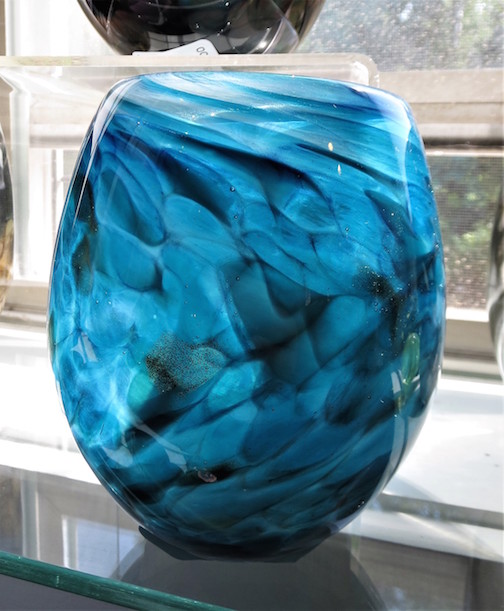 Handblown glass votives by Lea Dewit are at Last Chance Gallery in Lutsen.

Here are some of the photos we found this week: 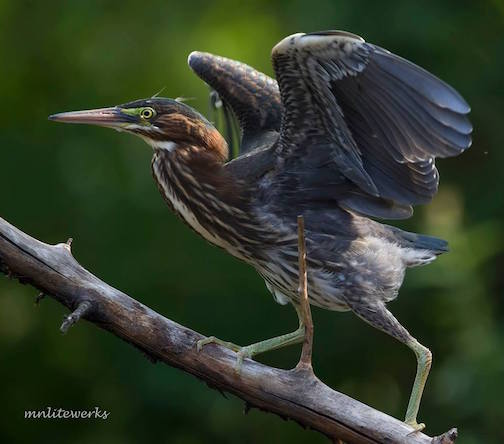 Mark Nicholson took this awesome shot. It won in the Frozen Photographers contest entitled “Show Us Your Best Shot.” Kudos to Mark! 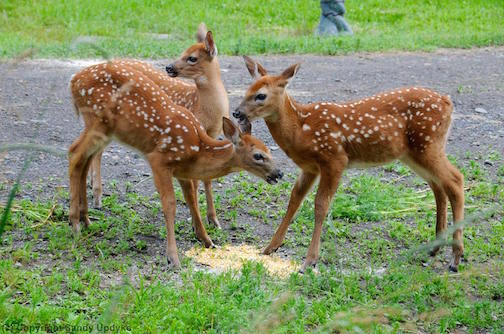 Triplets in Cook County! Sandra Updyke caught these cuties eating corn in her back field. 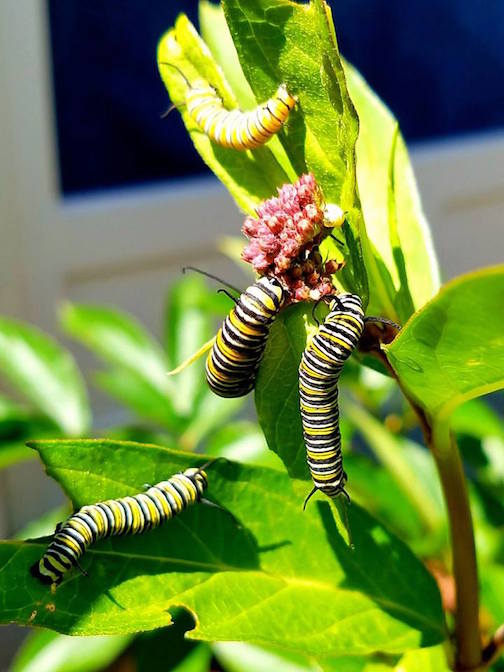 Monarchs on milkweed by Tom Kasper. 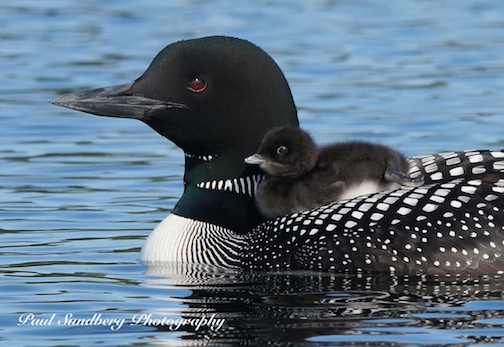 Here’s a classic by Paul Sundberg. 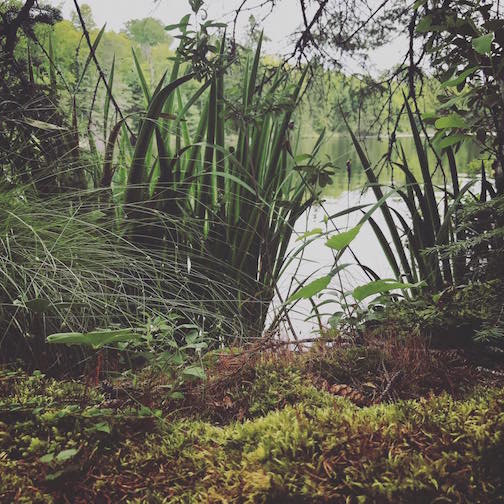 Working from home by Kristofer Bowman. 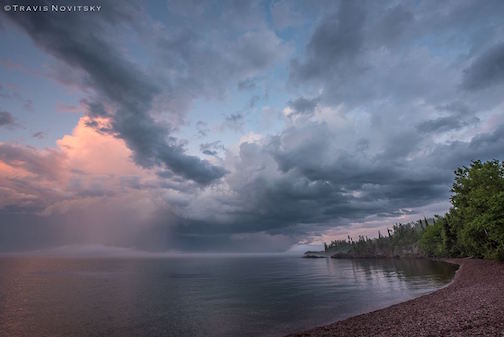