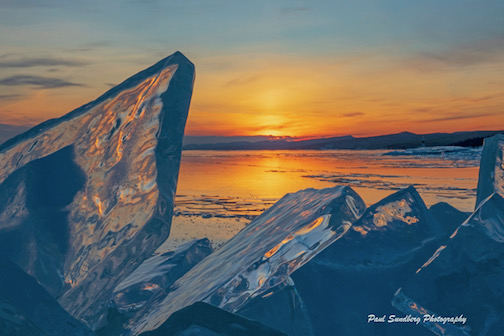 It’s a pretty quiet week on the North Shore, although there’s lots of great music, a French film and wonderful art exhibits, and, of course, plenty of snow. 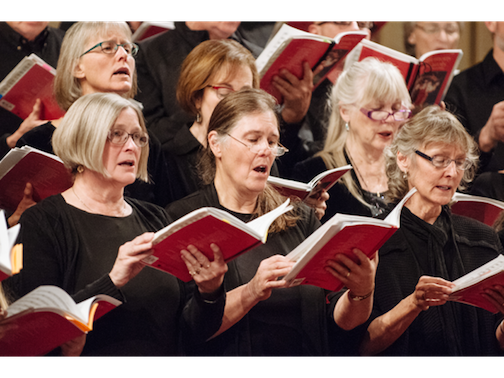 A community listening session will be held at the Grand Marais Public Library from 10:30 a.m. to noon on Thursday, Feb. 21, to provide poet Julia Klatt Singer and composer Craig Carnahan stories about the community.  The stories will be incorporated into poems and songs for the Borealis Chorale Christmas concert next December.

The event at the library is free and open to all.

Later that afternoon, the Science Museum of Minnesota will set up an engineering corner in the library for students to try their hand at various challenges provided by the presenters from the museum. It will be from 4-5 p.m. All youth invited.

Then, at 6 p.m., the Grand Marais Writers’ Guild will hold its monthly meeting for “anyone who writes anything.” The meeting is held until 7:30 p.m. All writers invited. Free. 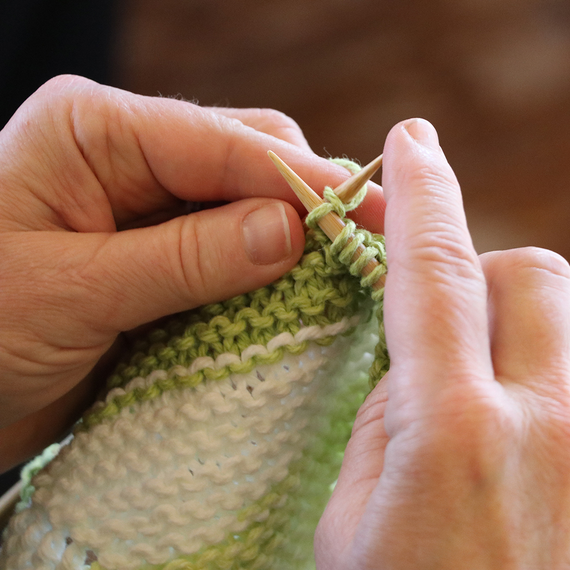 A steek is a “bridge” of extra stitches in a knitted piece that allows knitting in the round and later cut to accommodate a front opening, sleeve or neckline. Participants will learn the history of steeking, when and how to steek and have the opportunity for the hands-on machine sewing and cutting essential for this skill. All invited. Free.

On Friday, the Grand Marais Public Library will continue it’s film series, Friday Night Reels, with the screening of “Faces Places,” a French documentary about 89-year old Agnes Varda, one of the leading figures of the French New Wave, and acclaimed 33 year-old French photographer and muralist, JR, on a road trip of creativity. Check out the trailer below. .

Everyone is invited. The film starts at 6 p.m. Free.

For Celtic music lovers, the Northern Lake County Arts Board will host the Celtic Duo, Patsy O’Brien and Dick Hensold, in a concert at the William Kelley High School Auditorium at 7 p.m. on Friday 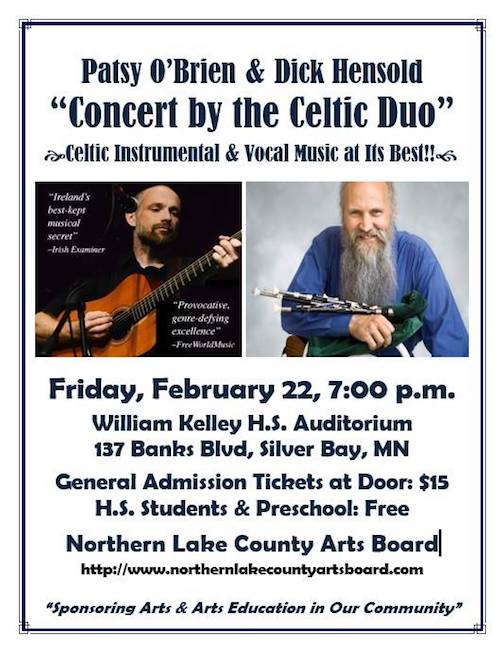 Patsy O’Brian and Dick Hensold will be in concert in Silver Bay on Friday.

O’Brien is from County Cork, Ireland, and is a traditional and award-winning singer/songwriter. Hensold is the leading Northumbrian smallpiper in North America, and has performed all over the world. Tickets are $15 at the door. High School students and younger get in free.

Last week, there were all kinds of events indoors in Cook County. This week, it’s get-out-and-enjoy-the-snow time. There are dog sled tours available all day at Skyport Lodge on Saturday and there’s a a Blast from the Past Vintage Snowmobile Ride at Cascade Lodge starting at 10 a.m. There’s plenty of powder at Lutsen Mountains and the cross-county ski trails are packed and ready, not to mention snowshoe forays into the woods, trips on frozen, snow-covered rivers and fat bike tours.

And, if you’re traveling to Thunder Bay this weekend. check out the snow sculptures at Prince Arthur’s Landing. There are lots of them and are a fascinating and wondrous exhibit of carvings in snow.

Michael O’Connor and his team crafted this snow sculpture of canoeists in the Quetico, one of many snow sculptures at Prince Arthur’s Landing in Thunder Bay.

Check out this need video and story of the snow sculpture event here.

There’s some interesting music this weekend, too, with Mysterious Ways, including the sheriff of Cook County, playing their energetic rock at two different venues. For a different experience, consider the Grace Notes, which is playing Celtic music and more at The Cove at the Best Western on Saturday night, Gordon Thorne at the North Shore Winery, Common Ground at the Wunder Bar and the Joshua J Schmidt Band at Papa Charlie’s. Check the music schedule below for all the music this week.

On Wednesday, WDSE’s “Historic Trails in Northern Minnesota” will be screened at Voyageur Brewing Co. at 6 p.m. The documentary follows the Gunflint Trail, Voyageurs National Forest trails and the Mesabi Trail through their fascinating pasts, their multi-faceted modern uses, and explore what lays ahead for these winding paths.

This is the last weekend to see the Winter Plein Air exhibit at the Johnson Heritage Post. More than 20 plein air painters spent a week at YMCA Camp Menogyn during the Polar Vortex and came out with some amazing work.

True, a lot of time was probably spent indoors, see below. 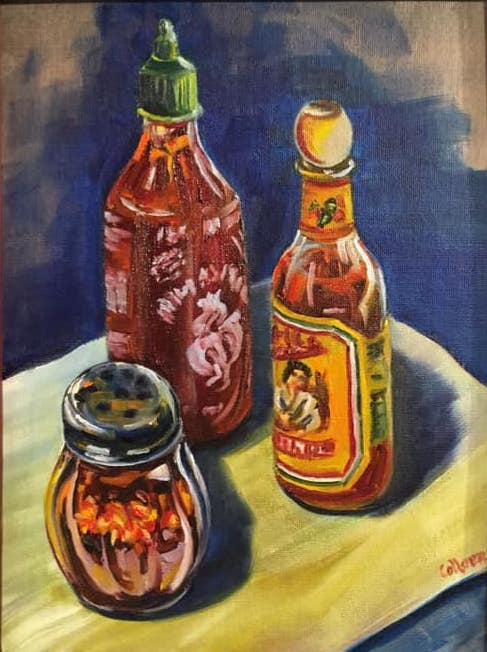 “Trio with a Kick” by Colleen Cosgrove, is one of the paintings in the Winter Plein Air exhibit.

But the painters did get outside to make some great work. 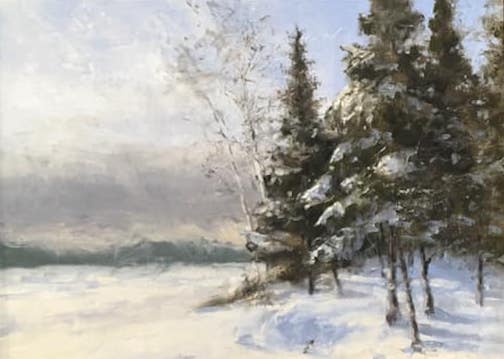 “Traces of Blue”by Rober Hagberg, is one of the paintings in the Winter Plein Air exhibit.

Tettegouche State Park is hosting a photography exhibit entitled Polar Vortex through March 1, when there will be a closing reception from 5-7 p.m. 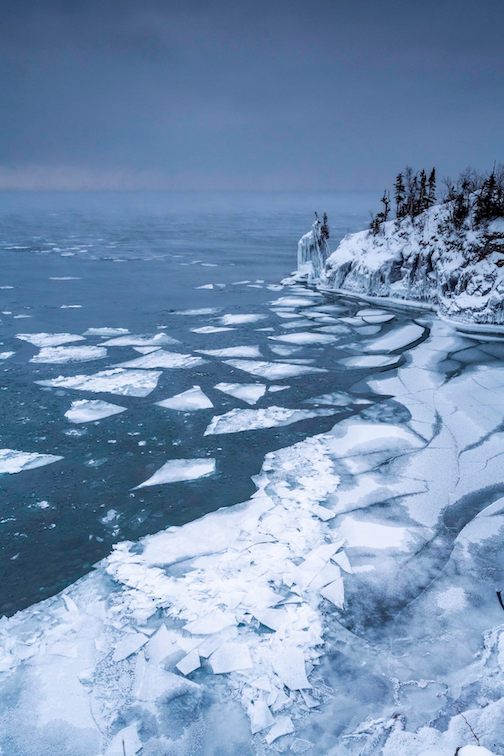 Icy shoreline by Jim Schnortz is on exhibit at Tettegouche State Park.

In Duluth, the Tweed Museum of Art has just opened a new exhibit entitled “Space: Time and Place,” and features photographs from their collection that address movement and engage with spatial dimensionality as structure and symbol. Here’s one of the photographs in the exhibit. 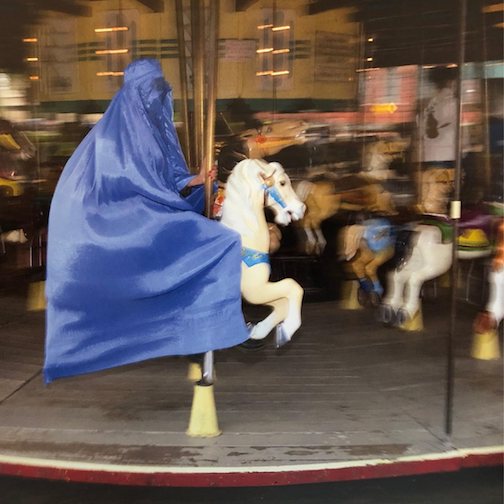 “On the Carousel,” detail. Photograph by Behnaz-Babazadeh, one of her Burka series.

This is the last weekend to see the Member Show at the Duluth Art Institute. The exhibit includes a wide variety of work by member artists in a number of different media. 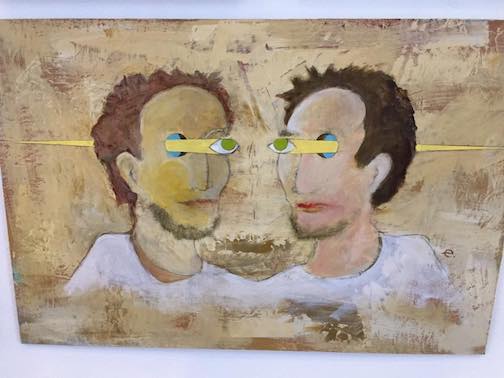 Ed Newman has this piece in the Duluth Art Institute‘s Member Show.

Carla Hamilton is the featured artist at the Zeitgeist Arts Cafe in Duluth this month. 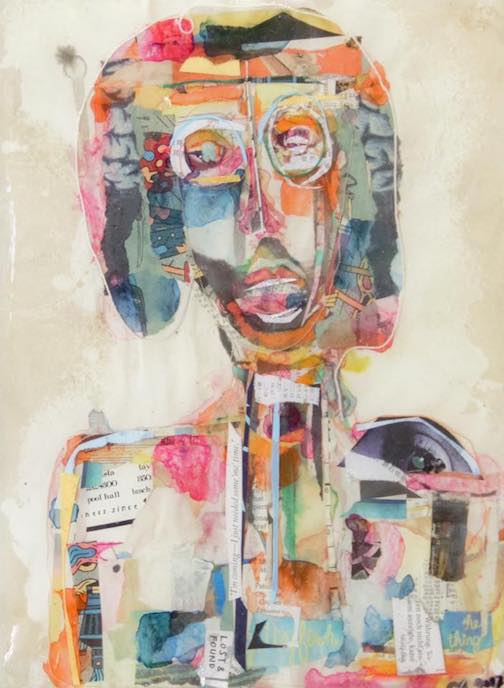 Kool Aid by Carla Hamilton is at the Zeitgeist Cafe.

In Thunder Bay, the Thunder Bay Art Gallery notes that this is the final two weeks to see “Exorcism” by internationally acclaimed artist Carl Beam.

“Exorcism” by Carl Beam is at the Thunder Bay Art Gallery.

This work was the Gallery’s first commissioned piece; measuring 7 ft by 20 ft, it remains to this day the most massive and materially complex piece in the permanent collection.

We thought we might mention some events in the Twin Cities. NCECA, or the National Council on Education for the Ceramic Arts, is coming to Minneapolis for it’s annual convention, Claytopia. It’s only the second time they’ve visited the city. All the potters from miles around are getting ready, and ceramic exhibits have already started. Word is there will be 100 clay exhibits in the Twin Cities by the time the convention starts at the end of March. Here’s just one example:

“Finding the Authentic Self,” which opened  Sunday at the Sabes JCC, was inspired by a song by Minnesota musician Dan Israel. Curated by Steve Basile, a longtime ceramics collector, founder of the Curated Ceramics website and the large, very active and occasionally scrappy Studio Pottery Collectors Facebook group, the show will feature work by 16 potters and one painter. 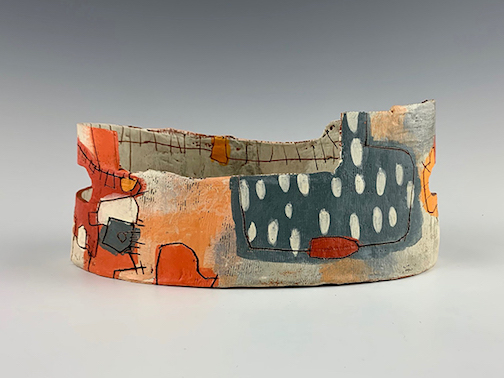 Ceramics piece by Rebecca Zweibelz is one of the pieces in Finding the Authentic Self.

Pieces will be accompanied by short essays, written by the artists, that address the exhibition theme. The exhibit continues through the end of March.

And FYI,  Here’s an article about Claytopia.

Sones de Mexico, Mexico’s premier folk music organization specializing in Mexican “Son,” and a variety of regional styles, will be in concert at the Arrowhead Center for the Arts on Friday, March 1 at 7 p.m. 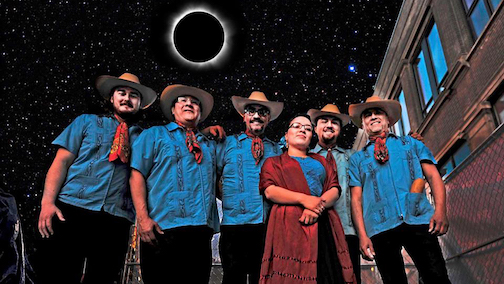 Sones with Moon. The group will be in concert at the ACA March 1.

They will be in concert for an evening of music and dance. Everyone invited. Tickets are $15.

Betsy Bowen’s latest book, “The Lost Forest” has arrived in her studio. 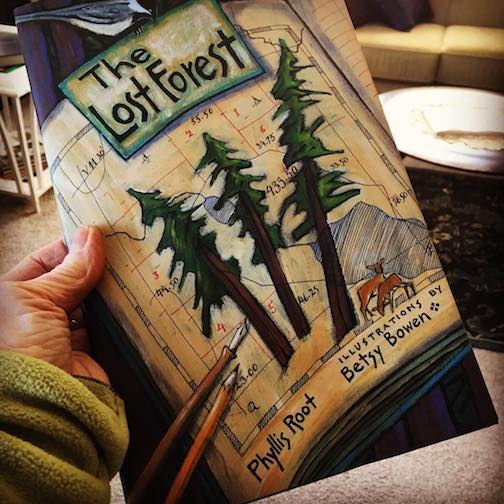 “The Lost Forest,”written by Phyllis Root and illustrated by Betsy Bowen, is out. It is published by University of Minnesota Press.

Mike Loeffler, artisan in residence at North House Folk School, is exhibiting his bird bowls at the Norway House in the Twin Cities, along with two Norwegian craftsmen. 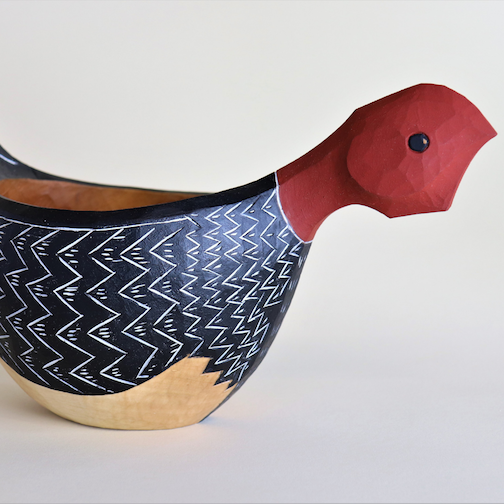 Mike Loeffler’s bird bowls are on exhibit at the NorwayHouse in Minneapolis.

We found some great photographs this week. Here is a selection. 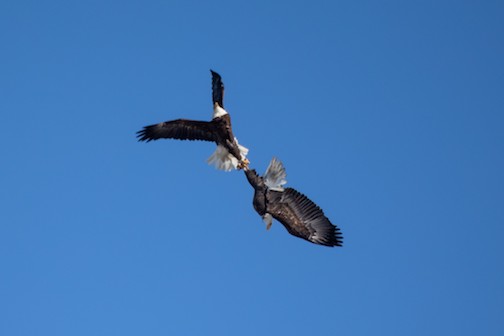 Eagles locking talons in the spring ritual. Photo by Thomas Demma, taken at the DNR Eagle Cam site near the Twin Cities. 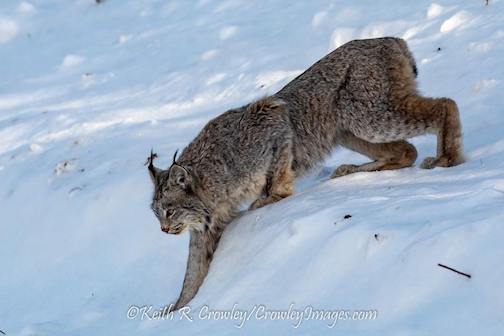 Lynx are lanky by Keith Crowley. 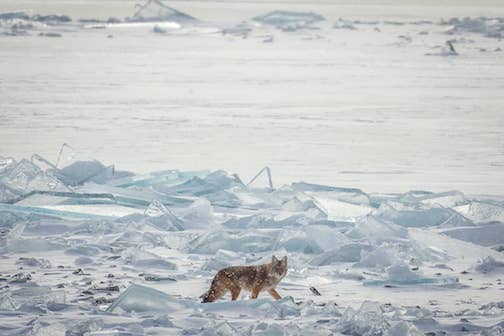 Wolf crossing the ice toward Wisconsin at Two Harbors by Christian Dalbec. 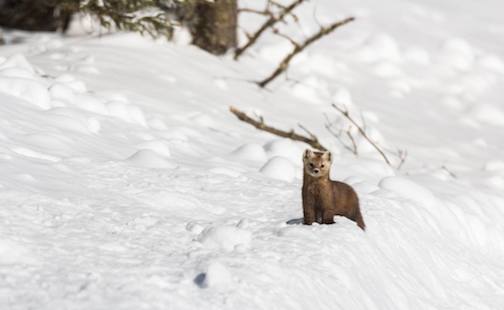 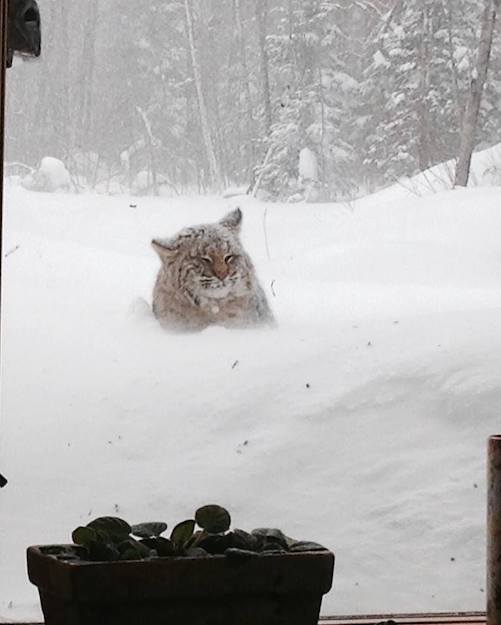 Too much snow for anyone by Eileen Anselment. 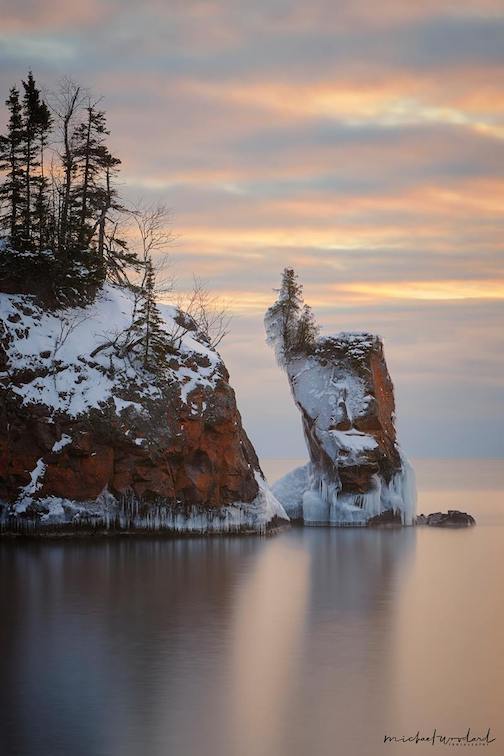 One of my favorite views–Tettegouche State Park by Michael Woodward. 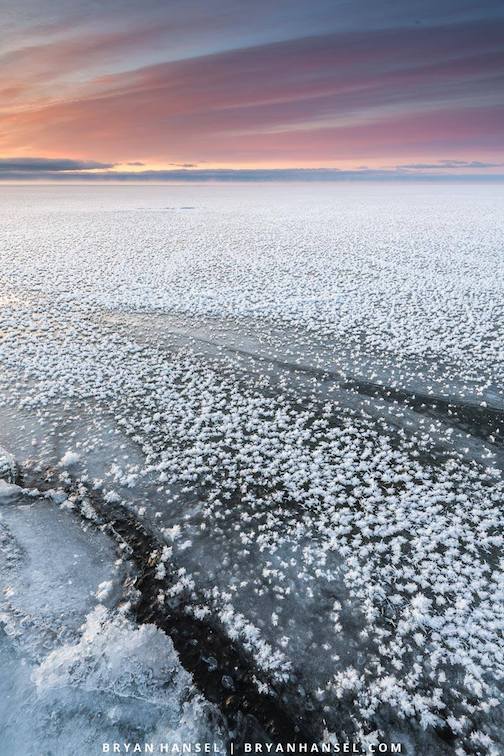 Forest flowers covering the ice on Lake Superior at sunrise from Artist’s Point. 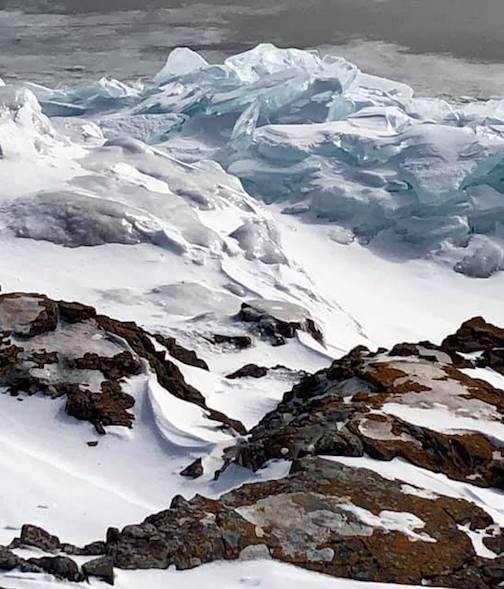 Tones and textures of today by Maryl Skinner. 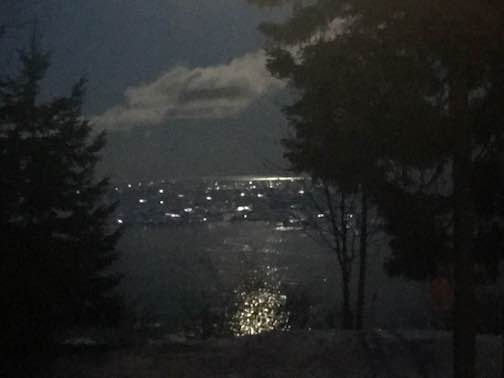 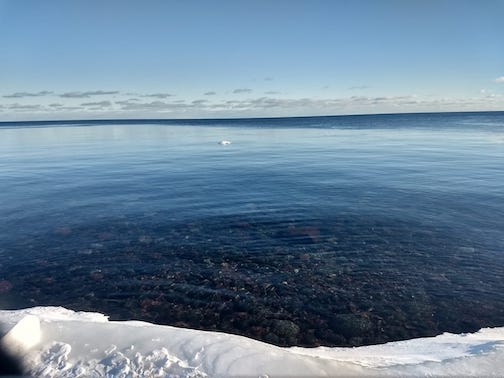 And some fantastic Snow Moon shots: 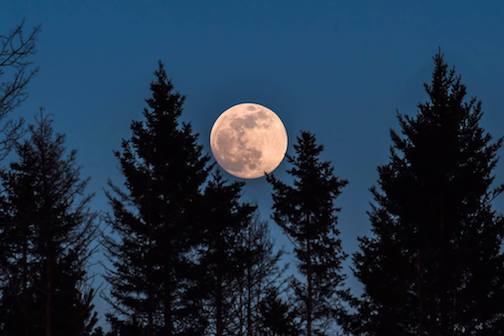 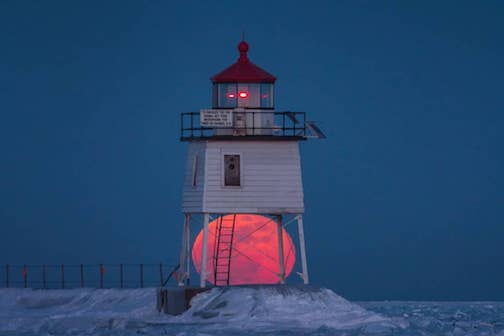 And this incredible shot by Thomas Spence. It was the featured shot on www.spaceweather.com on Wednesday. 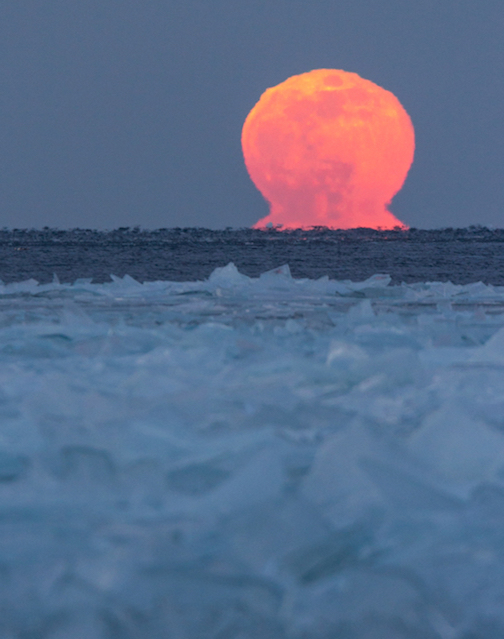 And finally, a portrait of one of the photographers that make all of this possible: 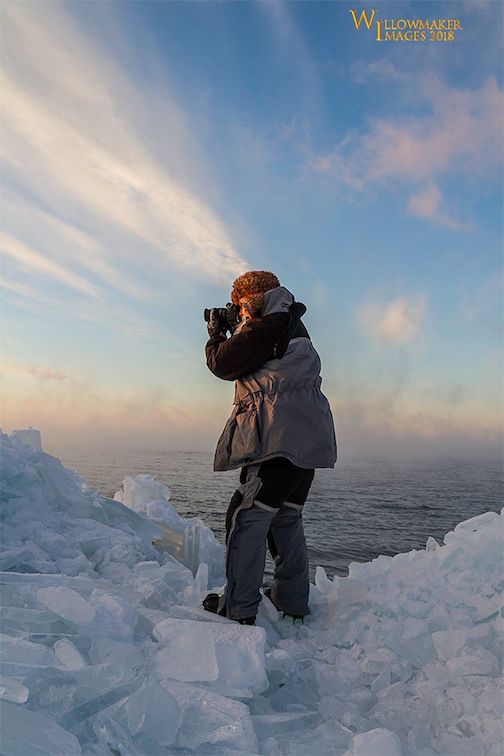 Kirk Schleife taking aim at the sunrise by Jamie Rabold.

Next post: The Sones of Mexico, Art of Healing and Lake Trout