The Sones of Mexico, Art of Healing and Lake Trout 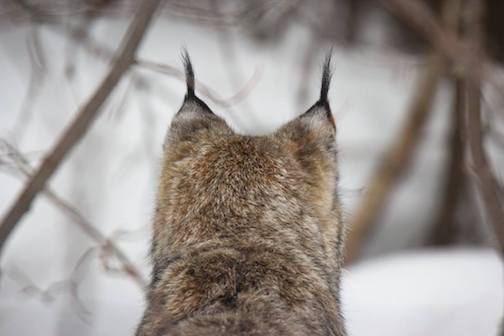 Another weekend of fun is coming up, including an art exhibit opening, a Mexican music jam and dance class and a concert,  and lots of outdoor activities.

First up is a Maple Syruping Skill Share with Marybeth Garmoe at North House Folk School at 7 p.m. Thursday. Garmoe will cover the process of gathering maple sap, how to reduce it, as well as how to use it once completed. The workshop is open to all and free.

Also on Thursday, the nationally known musicians, the Sones de Mexico Ensemble, who are in Grand Marais this week, will lead a music jam and folk dance at the Grand Marais Art Colony from 7-9 p.m. Participants are invited to bring their instruments and plan on having a great time. Tickets are $5. Open to all.

Sones will lead a music jam and dance at the Grand Marais Art Colony from 7-9 p.m. on Thursday. They will also be in concert at the Arrowhead Center for the Arts at 7 p.m. on Friday.

The Sones de Mexico Ensemble is the country’s premier folk music organization specializing in Mexican “son,” including the regional styles of huapango, gustos, chilenas, son jarocho, and more. The two-time Grammy-nominated group has toured nationally and internationally, including performances at the Getty Museum in L.A., New York’s Carnegie Hall, and the Kennedy Center in Washington, DC.

The Sones de Mexico Ensemble will be in concert at the Arrowhead Center for the Arts on Friday at 7 p.m.  Tickets are $15 adult, $5 for youth 18 and under. Here’s a video of some of their music.

Also on Friday night, the Johnson Heritage Post will hold an opening reception for the Art of Healing, an exhibit sponsored by the Violence Prevention Center. The reception is from 5-7 p.m. 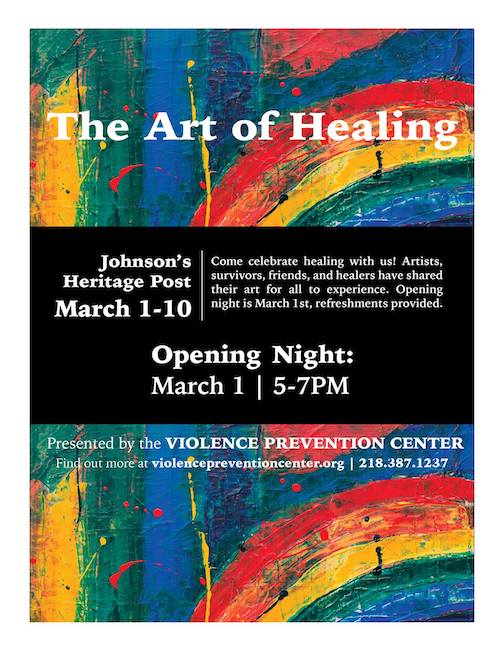 The Art of Healing opens at the Johnson Heritage Post on Friday night with a reception from 5-7 p.m.

The exhibit will contain artwork by Cook County residents whom have used art as a means to respond, explore, express and heal from their personal experiences with domestic & sexual violence. The exhibit will run through March 10. The gallery hours at the Heritage Post are from 10 a.m. to 4 p.m. Thursday through Saturday and from 1-4 p.m. Sunday.

Also, Poet Michael Bazzett, the son of Maureen and Bob Bazzett, whose book of poetry, “Popol Vuh” was named best poetry book of 2018 by the New York Times, will talk about his work on The Roadhouse on Friday. The Roadhouse airs from 5-7 p.m. The Plucked Up String band will also play.

Saturday is a great day to explore the outdoors and enjoy the exhibits and the shops in Cook County. The snow is fantastic this year, and all the trails are in great shape.

For fishermen, the Annual Trout Derby hosted by the Cook County Ridge Riders will be on West Bearskin Lake this year. Registration opens at 9 a.m. Saturday. Food and beverages will be available. 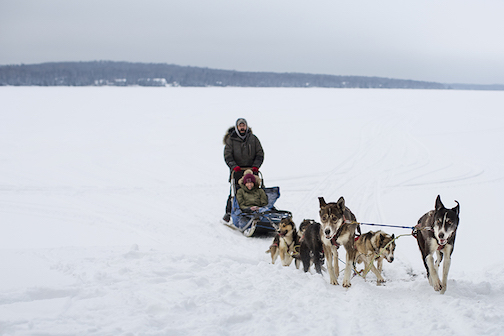 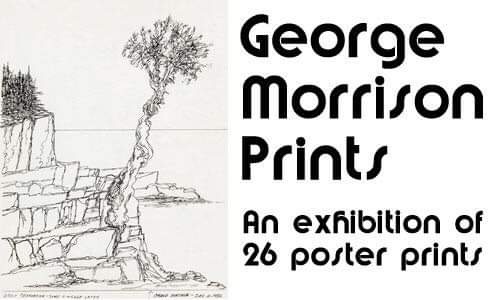 The North Shore Winery is exhibiting work by George Morrison.

The Polar Vortex exhibit at Tettegouche State Park continues this week, with a closing reception at 5 p.m. on Friday. The photographs depict Lake Superior during the Polar Vortex by students of John Gregor. 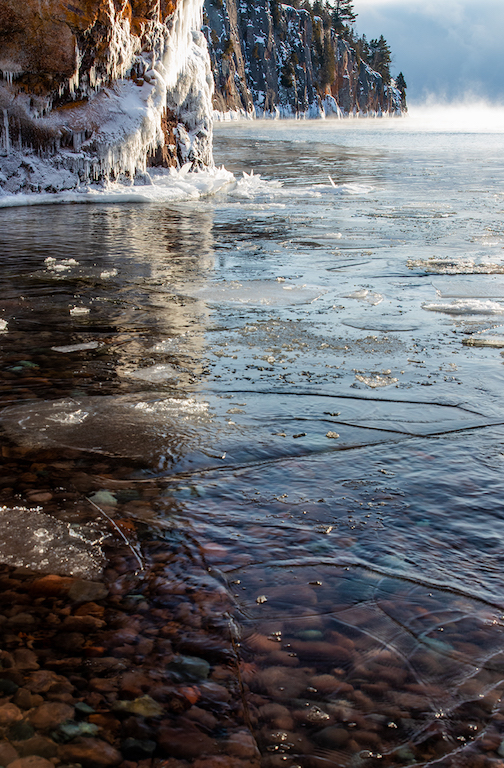 Watch your step by Christy Illig, one of the photographers in the exhibit at Tettegouche State Park.

A new exhibit opens at Tettegouche on Tuesday, March 5. Entitled Masterpiece Art, the show features artwork from students at William Kelley Elementary School who were inspired by a variety of artworks by the masters. The exhibit continues through March 30.

In Duluth, this is the last weekend to see the Members Show at the Duluth Art Institute. 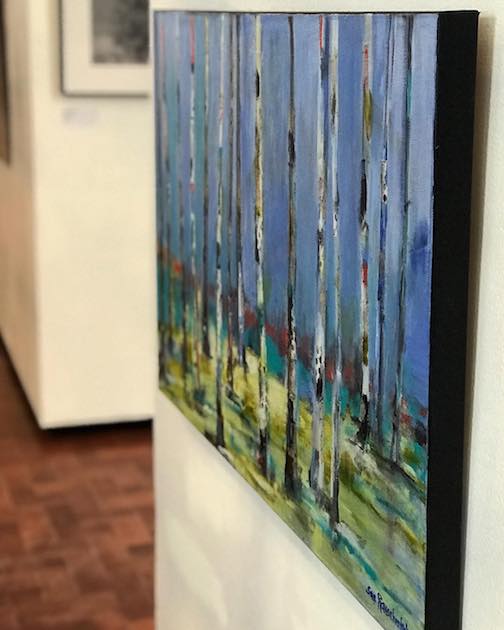 Sue Rauschendes painting, Birches on Parade, is one of the works on exhibit at the Members Show at the Duluth Art Institute.

The Tweed Museum of Art is featuring photographs in a new exhibit entitled “Space: Time and Place.: 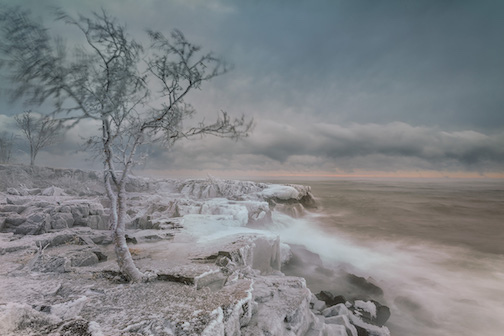 Frosty Tree by John Gregor is at the Tweed Museum of Art in its exhibit “Space: Time and Place.”

Also at the Tweed: 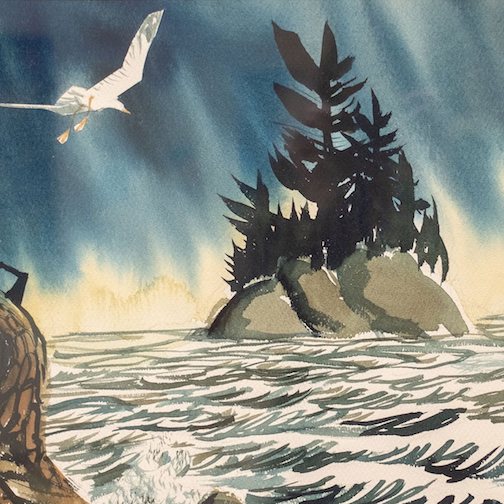 Untitled (Lake Superior) by Carl Gawboy, 1963, is one of the pieces in the Tweed’s exhibit, “Intersections.”

An exhibit of student work has opened at the Thunder Bay Art Gallery.

The exhibit features works by Hammerskjold High School, Grade 9 and 10 students in the Indigenous Cultural Program for First Nation, Métis, and Inuit students, from across Northern Ontario, illustrating the importance and sacredness of water through art.

The Baggage Building Arts Centre in Thunder Bay has put out a call for artists to participate in their spring exhibition. Deadline for online submissions is March 15. 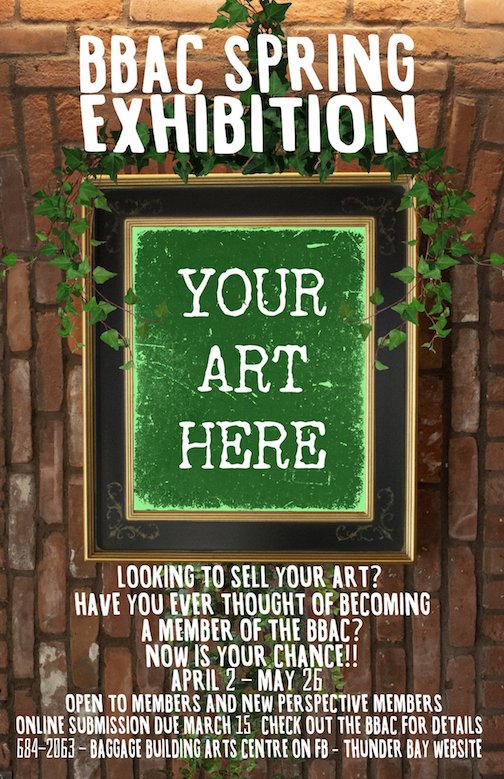 The Baggage Building Arts Centre has put out a call for artists to participate in its spring exhibit.

For more info about signing up for the show: bbac.angie@gmail.com

“The Quilters,” a production of the Grand Marais Playhouse, opens at 7 p.m. Thursday, March 7. Performances are Thursday to Sunday through March 17. Tickets available online or at the door. Stay tuned for details.

Corrie Steckelberg. who will be an artist in residence at the Grand Marais Art Colony, will hold an open studio from 9 a.m. to 11 a.m. on Friday, March 8, in the Founders Hall at the Art Colony.

The North Shore Artists League will meet March 12 from 11 a.m. to 1 p.m. at the Johnson Heritage Post. Natalie Sobanja and Max Linehan will lead a discussion on how artists are using social media to promote their art.  This will be an opportunity to learn from each other what works, what doesn’t, what we know and what we wished we knew.  Bring a bag lunch if desired. Free. All artists in any media art invited.

Also on March 12, artists are invited to participate in Arts Advocacy Day at the Capital in St. Paul. Arts Advocacy Day is a day for artists and arts advocates to join together to share with legislators the importance of art to our lives and our economy. Participants will meet at the Minnesota History Center, learn about advocacy class for new attendees, rally, and then meet your legislator at 8 a.m. the capital through 2 p.m. To register, click here.

And finally, kudos to Christian Dalbec for being a new artist at Sivertson Gallery. Check out this video of him unpacking his photographs.

Here’s the music schedule for the week: (Note: WTIP Community Radio is having a membership drive this week, so look for lots of live music, interviews and more at 90.7 on your dial. The radio station can also be streamed online.

We’ve been lucky to find great photographs again this week. 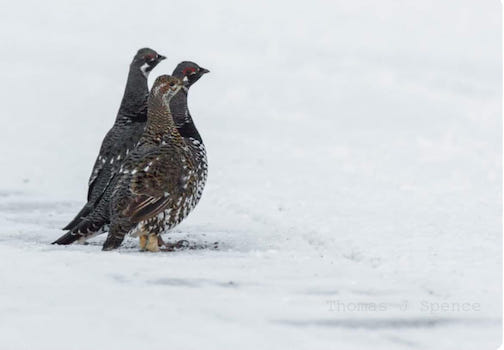 Spruce grouse finding gravel in the road. Thomas Spence took this three years ago, but it’s perfect for this week, too. 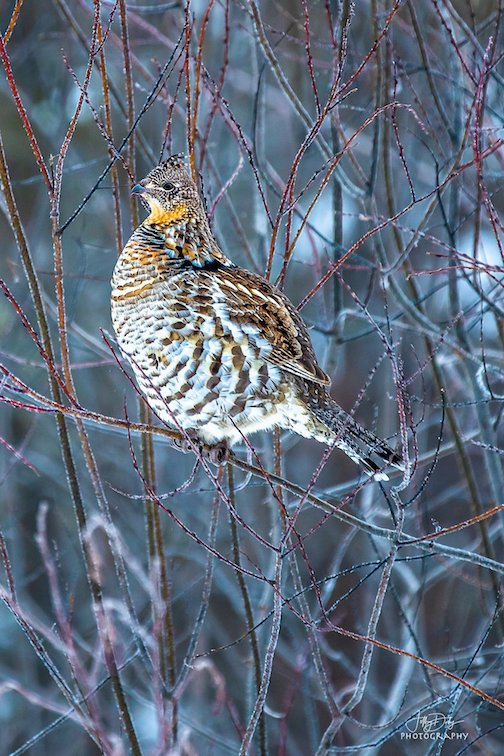 Spruce grouse in the Sax Sim Bog by Jeffrey Doty. 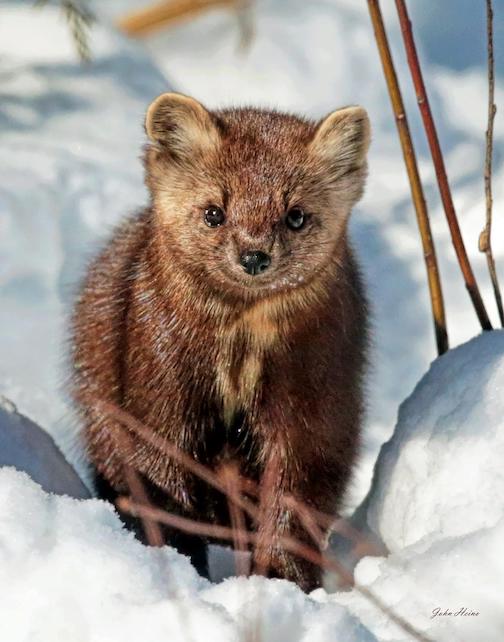 And an intense moment for this Snowy: 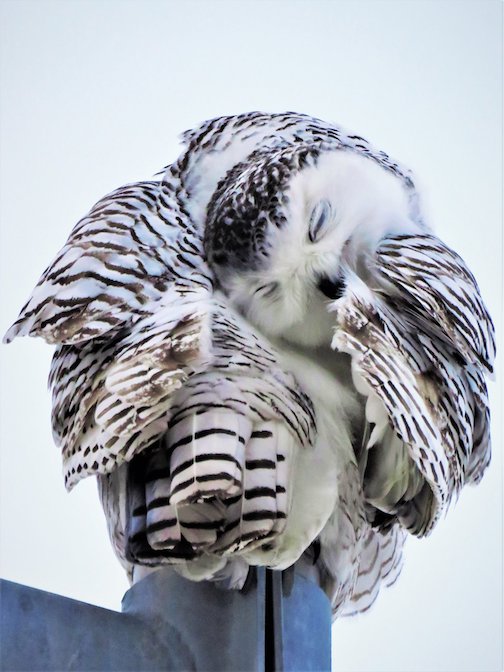 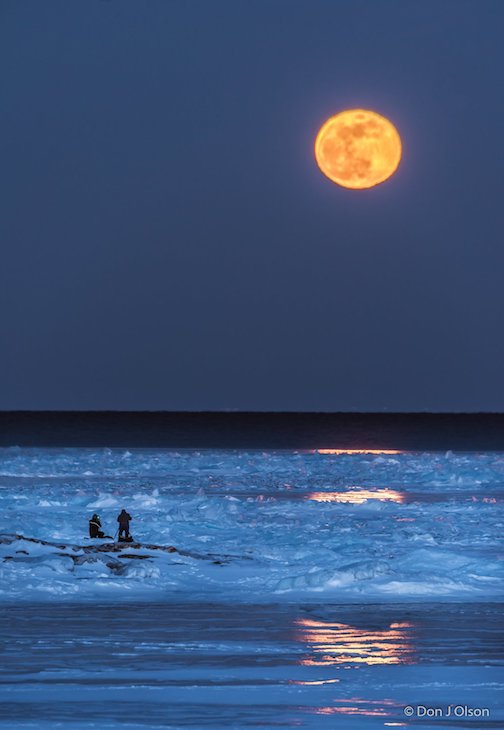 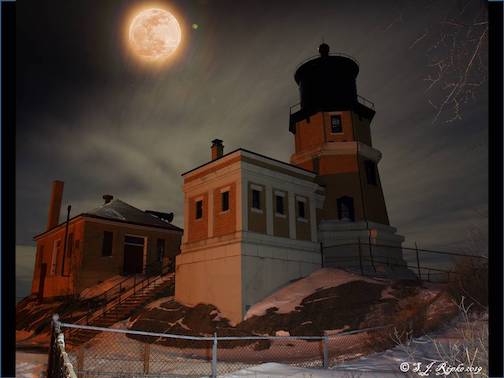 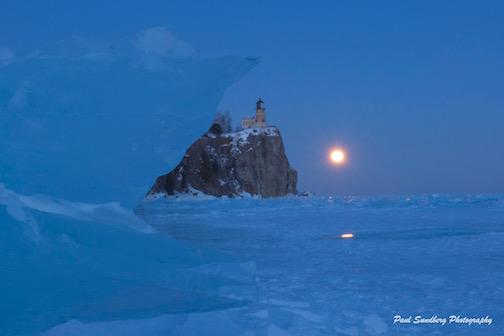 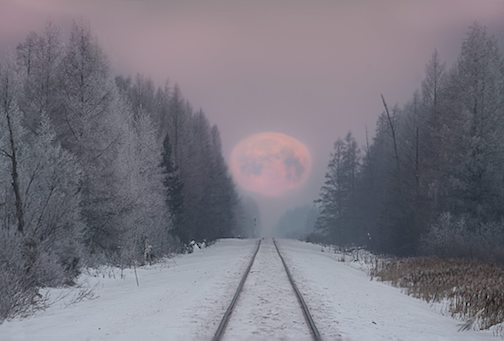 Super Snow Moon was on the midnight shift, going to sleep for the day by Matt Herberg.

After the winds by Matthew Brown. 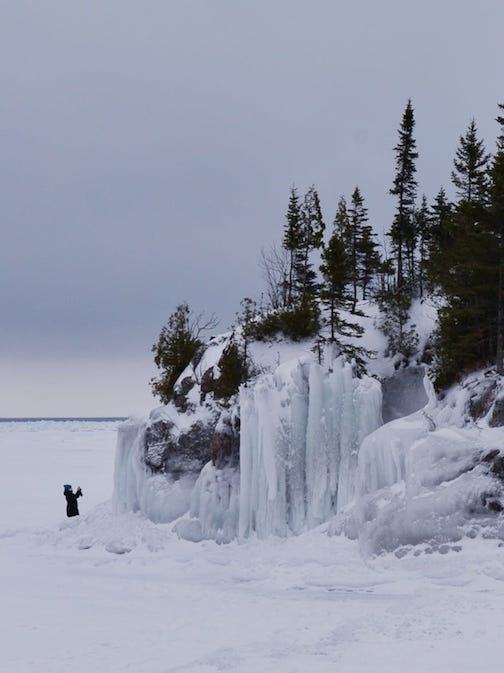 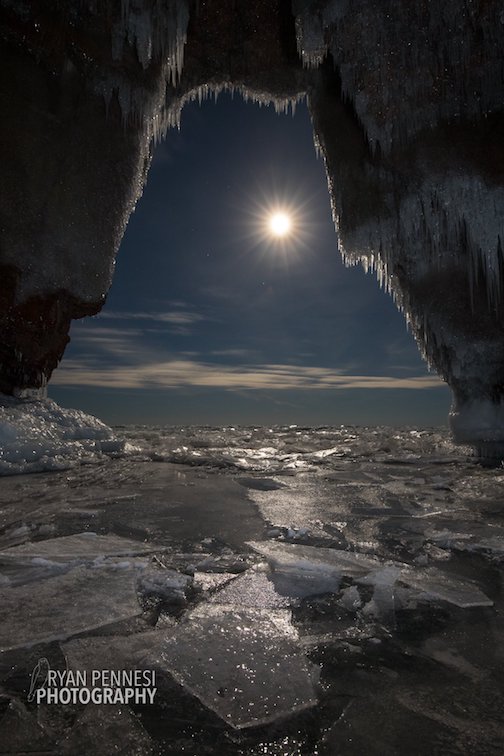 Hidden cave on the North Shore by Ryan Pennesi. 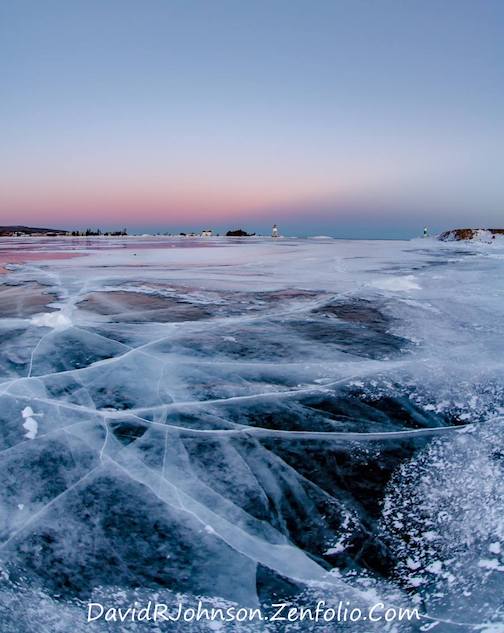 Morning on the ice by David Johnson. 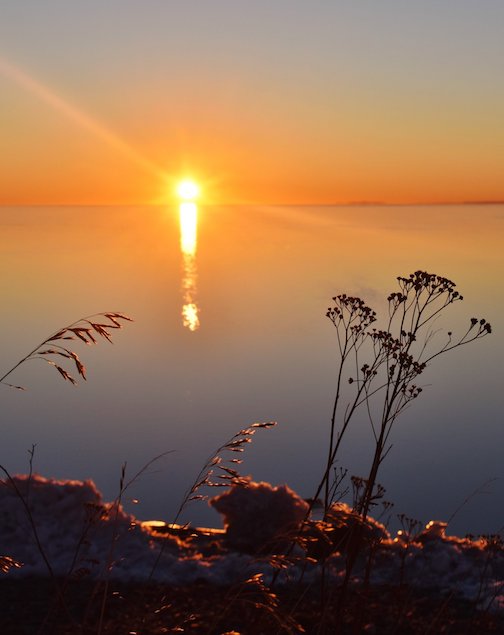 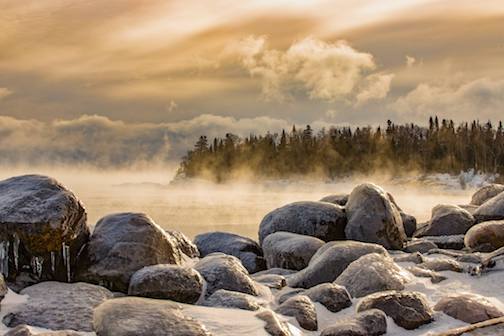 Sunrise during a recent cold snap by Jeffrey Doty. 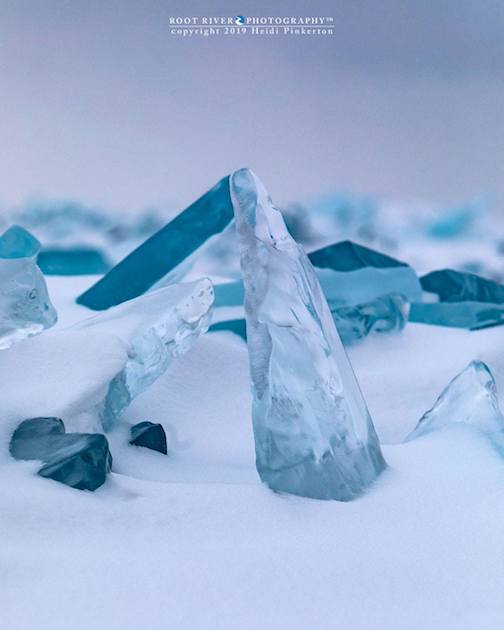 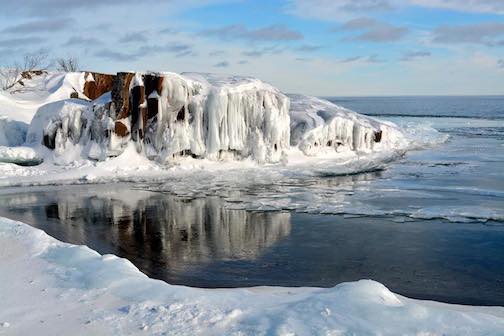 And here are some fascinating winter photos I found: 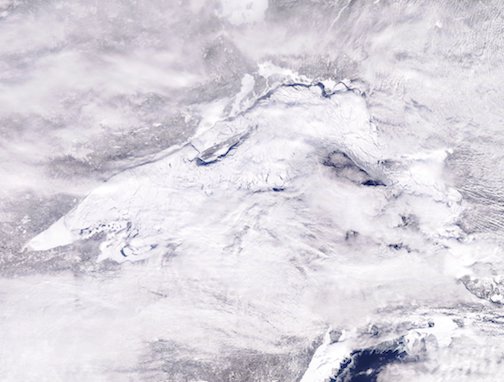 Last week, Lake Superior is 82% covered by ice, according to NOAA. 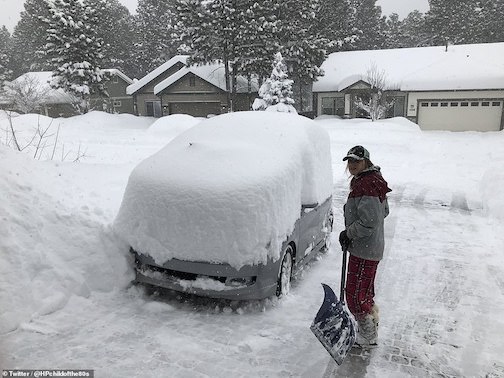 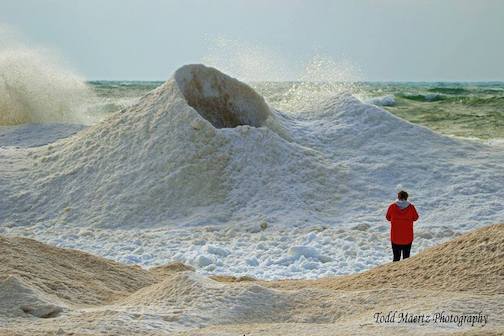 An ice volcano on Lake Michigan by Todd Maertz. 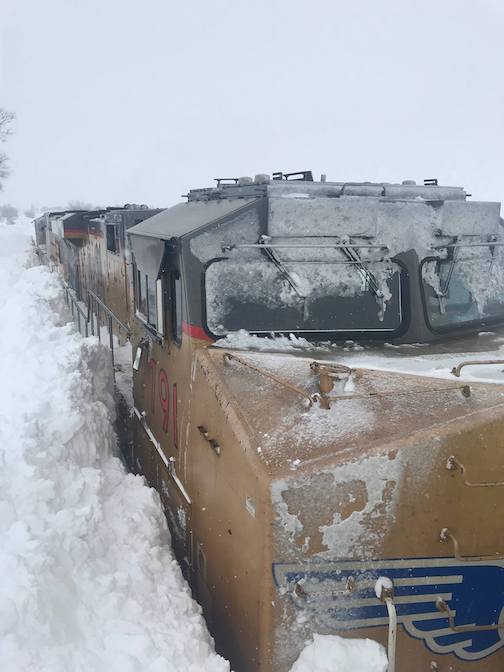 Train stuck in snow in Freeborn County has to be rescued by National Guard.

And finally, this crazy video:

And finally, this beauty. 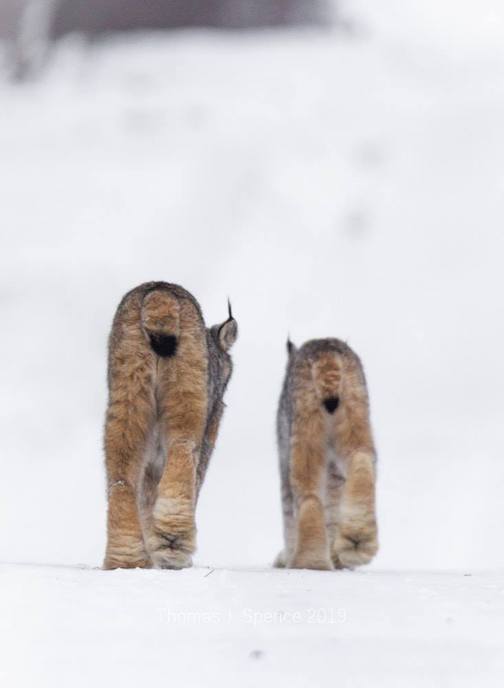