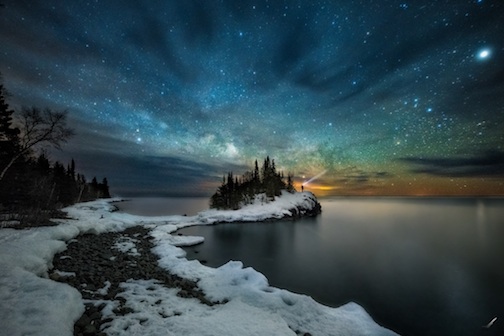 Easter week brings the final snowstorm of the season (maybe), a fantastic art opening at the Johnson Heritage Post, breadmaking, a great play opening on the North Shore and a Celtic Concert and Ceilli Dance, to mention a few.

First up is Bread Baking, the final Skill Share of the season at North House Folk School. 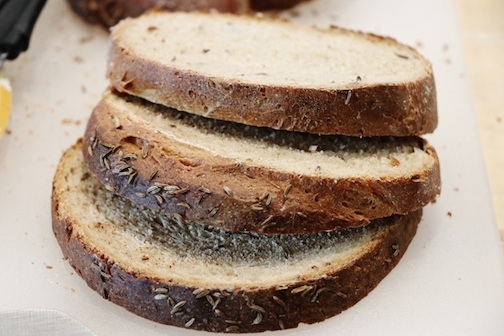 Mattison will demystify the process of baking artisan bread, from discussing basic ingredients to the fundamental steps and recipes. You “knead” not be afraid to bake. The Skill Share is free and open to the public.

On Friday, the Johnson Heritage Post opens the exhibit “Chroma/Creature/Vessel/Vision,” a collection of classical-style paintings, wooden sculptures, resin-ink color bursts and soft sculptures by the talented artists from the Lewis family. Siblings Corrie Steckelberg,  Forest Lewis and Josie Lewis, along with their father, Joel Lewis, will all have pieces in this show. It should be a great art feast. 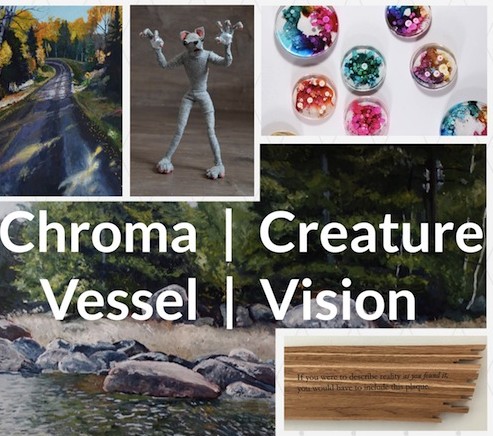 The Lewis family exhibit, “Chroma/Creature/Vessel/Vision” opens at the Johnson Heritage Post with a reception from 5-7 p.m. Friday.

The opening reception for “Chroma” is from 5-7 p.m. Friday, March 29. Refreshments will be served. On Saturday, Steckelberg and her father, Joel Lewis, will give an Art Tour at 1 p.m. The public is invited to both events. The exhibit continues through April 22.

The Heritage Post is closed on Tuesdays. It is open from 10 a.m. to 4 p.m. on Mondays and Wednesdays through Saturdays  from 1-4 p.m. Sundays.

In Two Harbors, the Voyageur Art Club of Two Harbors opens its annual spring exhibit: “Petals and Wings” at the Cedar Coffee Company, 1130  11th St. (Behind the SuperOne grocery store.)  The exhibit includes a variety of work by local artists, including some poetry or Ekphrasis: The written word about a work of art.

“Fences,” a powerful drama by August Wilson, opened in Duluth this week, and will be also be performed in Two Harbors and Silver Bay over the next few weekends. The play is a production of Lake Superior Community Theatre, based in Silver Bay.

“Fences” is one of August Wilson’s 10-plays series, “Century Cycle” about the 20th century African-American experience dealing with universal human and specific Black cultural issues and themes. The play opened on Broadway in 1986 and won the 1987 Pulitzer Prize for Drama plus The Tony Award & Drama Desk Award for Best/Outstanding Play. The 2016 movie starring Denzel Washington & Viola Davis won the Academy Award for Best Actress. The film was recently screened at the Grand Marais Public Library. 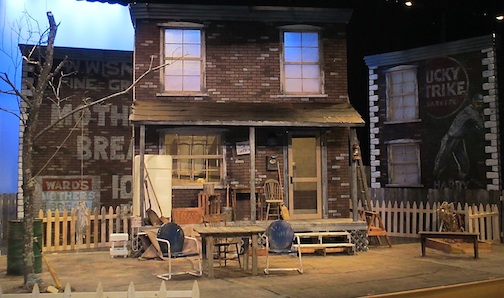 The set for “Fences” is amazing.

According to Paul Deaner, artistic director of the theater company, “This is the first time, to our knowledge, “Fences” will be presented in Minnesota north of the Twin Cities and the first time an  all African-American cast will perform a main-stage play production in Duluth and on the North Shore of Lake Superior.” 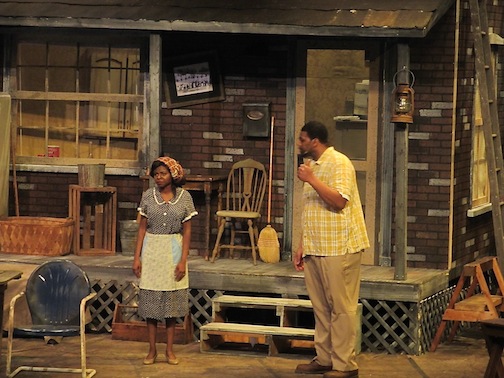 This is the first time that “Fences” has been performed north of the Twin Cities. It has an all African-American cast.

To give you a taste of the production, check out this short video produced by WSDE-TV.

The final performance of “Fences” in Duluth is on Thursday, March 29 at Lincoln Park Middle School. Performances in Two Harbors will be April 6, 7 & 8 at Two Harbors High School and in Silver Bay April 13, 14 & 15 at William M. Kelley High School.Tickets can be found at www.tix.com. 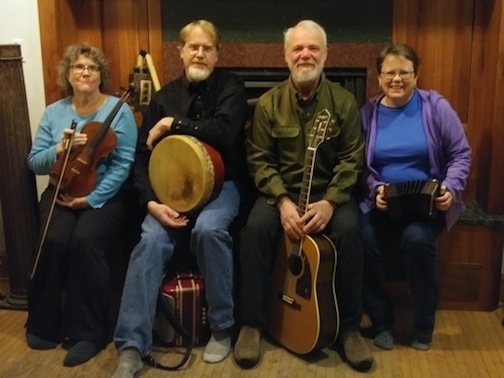 Also on Saturday, Papa Charlie’s will feature Erik Koskinen, The Pines, and Dusty Heart during the Spring Ski Ramble at Lutsen Mountains. The music starts at 8 p.m. 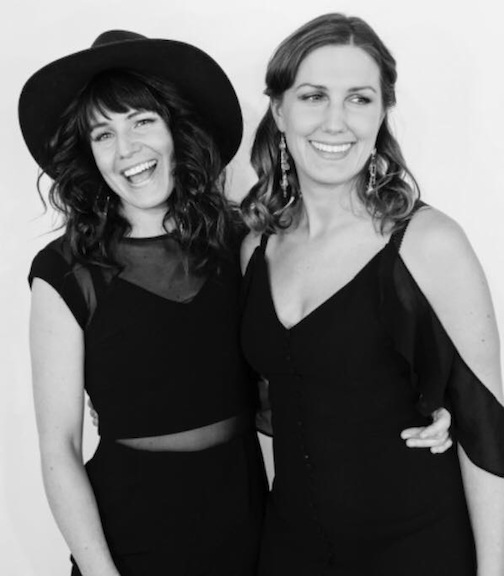 And in Duluth on Monday, artist Eric Dubnicka opens his exhibit, “Transmutation: Art of Growth and Love” at the Zeitgeist Arts Cafe. 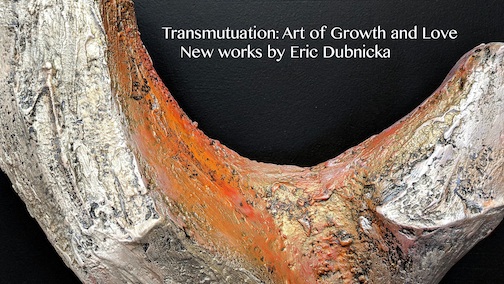 Dubnicka’s show includes paintings as well as sculptures. The opening reception is from 5-7 p.m. Tuesday, April 2.

The Tweed Museum of Art has opened a new exhibit from their collection entitled “Quiet Simplicity,” which features  tranquil landscapes, seascapes, farmsteads, and portraits that capture men, women and children enjoying the simple pleasures of life.

“Woman at Dressing Table” by David Axel Ericson (American, born in Sweden, 1869-1946), is one of the paintings in the “Quiet Simplicity” exhibit at the Tweed. Oil on canvas.

The exhibit is a romantic stroll through charming vistas of times past. 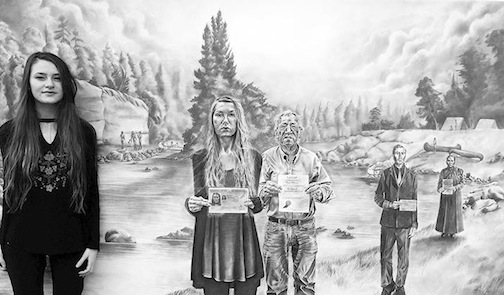 Lakehead University art student Mary McPherson stands by “My Elders Emerging from an Inauthentic Past,” her drawning that won the People’s Choice Award in the exhibit at the Thunder Bay Art Gallery. The exhibit continues through April 15. 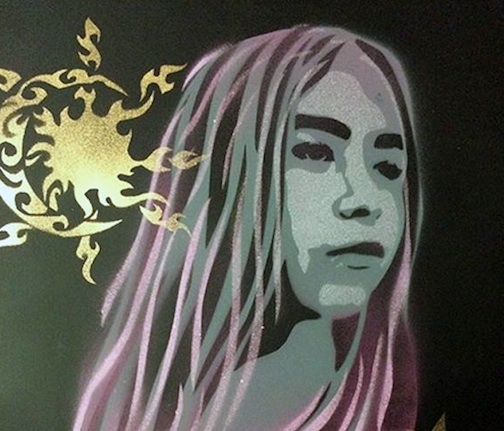 The Dennis Franklin Cromarty High School Exhibition opens this weekend. The opening reception is April 6 at 5 p.m. (EDT) The exhibit continues through April 29.

Siama and his Congo World Quartet will be in concert at the Arrowhead Center for the Arts at 7 p.m. April 7. The concert will feature  Siama, singer Dallas Johnson, global music drummer Tim O’Keefe, and renowned cellist Jacqueline Ultan. Siama will also present educational programs at the Grand Marais Public Library that Saturday. Stay tuned. 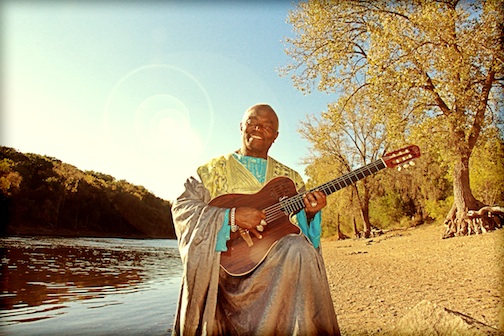 Siama and the Congo World Quartet will be in concert at the ACA April 6.

In Duluth, Adam Swanson will teach a a one-night guided painting class on how to paint a moose at the Duluth Art Institute April 12. 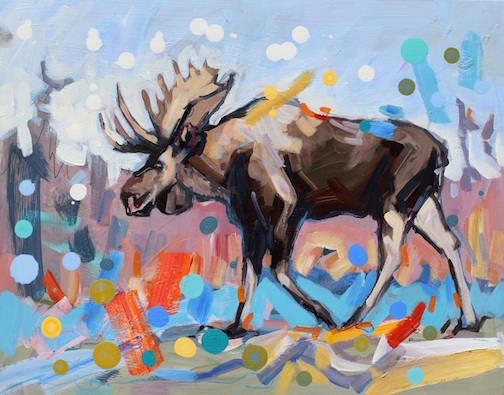 Adam Swanson will teach “How to Paint a Moose” at the Duluth Art Institute April 12.

The Grand Marais Art Colony is hiring a full-time Marketing Manager, who is responsible for all aspects of the marketing, advertising and promotional activities of the organization. Applications are due April 5. For more information and to apply, email info@grandmaraisartcolony. org.

Here’s the music selections for this week:

Lots of icy vistas and sunrises this week. But let’s start with wildlife. 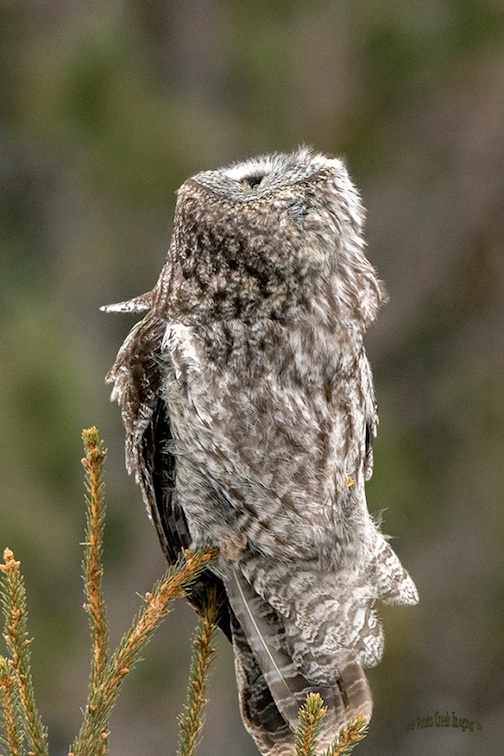 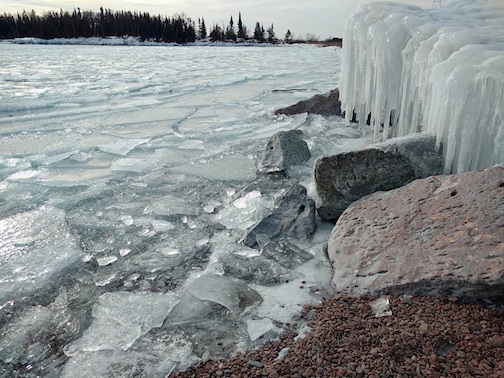 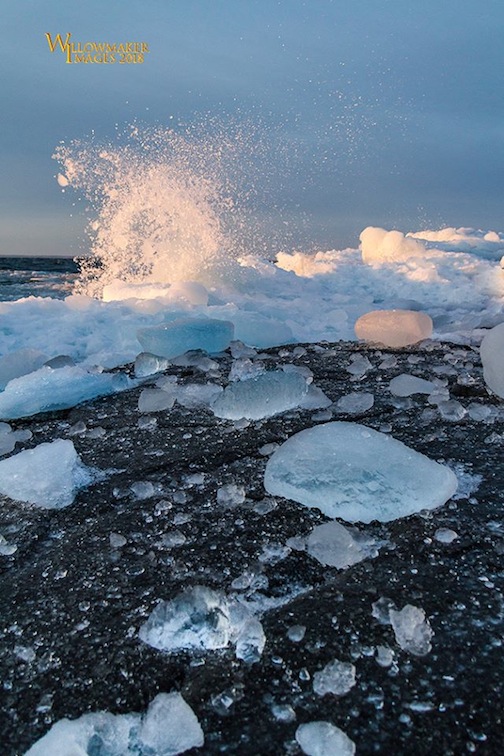 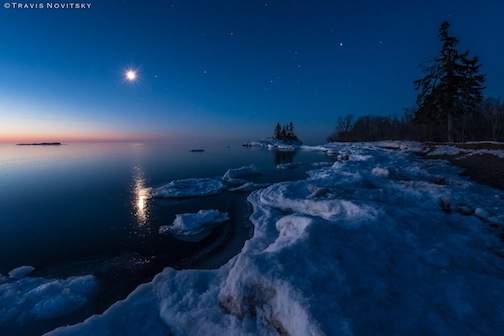 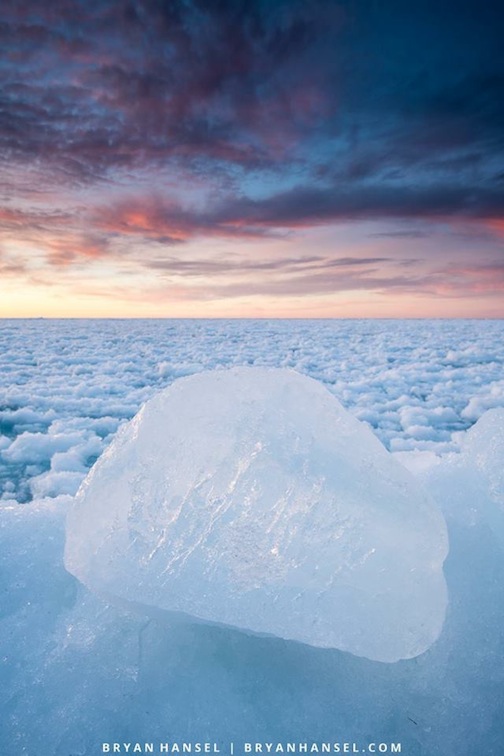 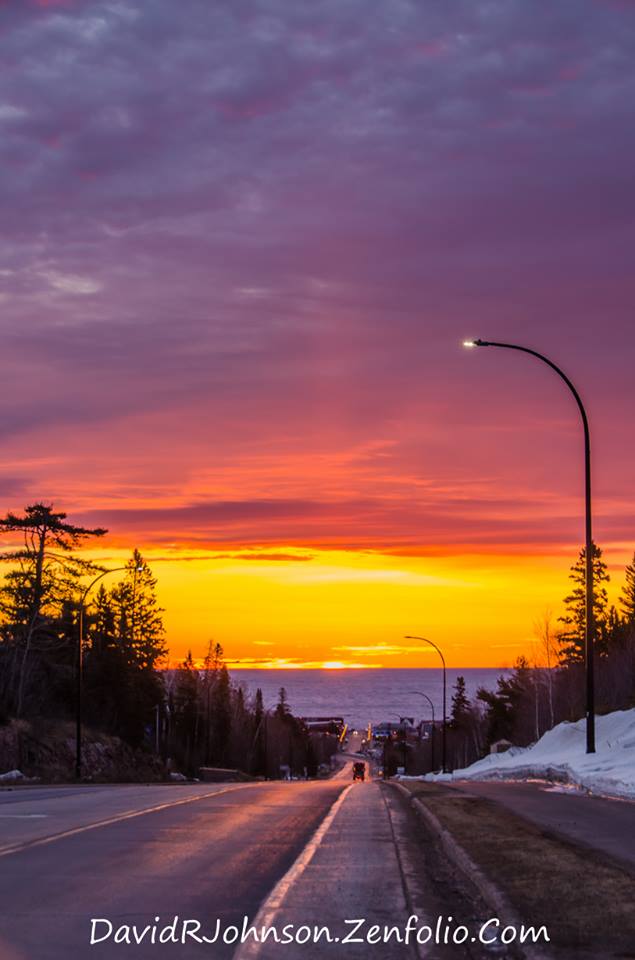 Awesome sunrise greets all to Grand Marais by David Johnson. 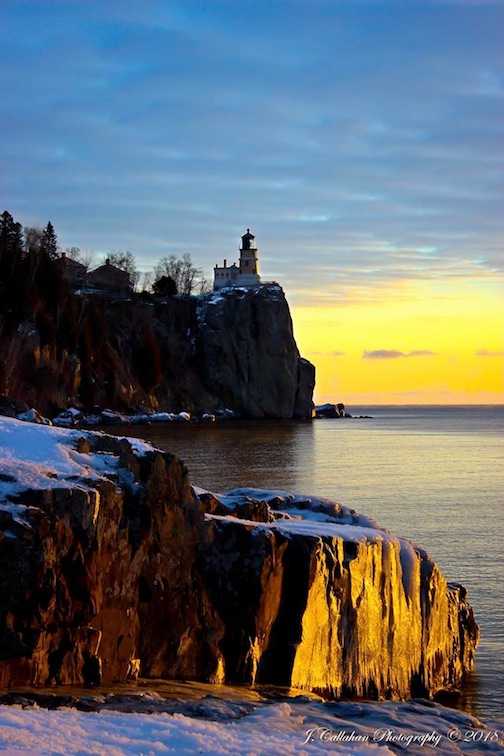 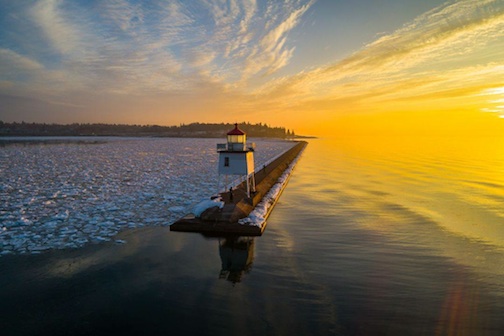