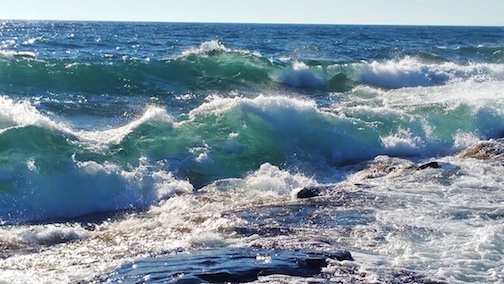 Rain soaked the North Shore this week, overflowing waterfalls as if it were spring. This weekend is almost overflowing, too, with everything from Shakespeare, an Arctic Film Festival and the first of the Christmas bazaars.

First up is the launch of Community Conversations organized by the Grand Marais Art Colony. The conversations will be held at noon on the third Thursday of every month, November through February. The topics will vary widely, ranging from a discussion of art inventory software to art critque models. This Thursday, Ruth Pszwaro, the program director at the Art Colony, will lead a discussion entitled “Responses to Beauty.” The event is free and open to all. Feel free to bring a bag lunch. 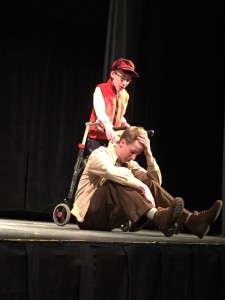 Also on Thursday, the second (and last) weekend of the Grand Marais Playhouse production of Shakespeare’s “As You Like It” begins. This Community Youth Production directed by Marco Good has had good reviews and features a number of young actors as well as adult community members.

Performances of “As You Like It” at the Arrowhead Center for the Arts are at 7 p.m. Thursday through Saturday and 2 p.m. Sunday. Tickets are $15 adults, $5 for students. Tickets are available at the door. 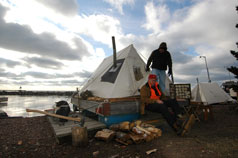 This is also the weekend for the highly anticipated Winterer’s Gathering at North House Folk School. The event, which runs from Friday through Sunday, features lots of workshops, demonstrations and presentations as well as the Arctic Film Festival.  Highlights include the Snowshoe Shuffle Conta Dance at 7 p.m. Friday, the Great Gear & Ski Swap at 10:30 a.m. on Saturday and the Deep Freeze Chili Feed at 6 p.m. Saturday as well as continuous screening of films throughout the event. 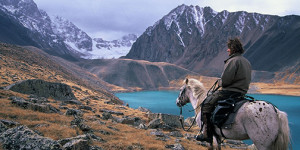 Tim Cope, author of “On the Trail with Genghis Khan” is the featured speaker at Winterer’s Gathering.

Tim Cope, an Australian author and adventurer, is the featured speaker this year and he will talk about his 6,000-mile journey on horseback across the Eurasian steppe following in the footsteps of Genghis Khan. Cope has studied as wilderness guide in the Finnish and Russian subarctic, ridden a bicycle across Russia to China, and rowed a boat along the Yenisey River through Siberia to the Arctic Ocean. Cope’s presentation, which begins at 7:30 p.m. on Saturday, will be followed by a 45-minute selection from “On the Trail of Genghis Khan,” a film documenting his journey. 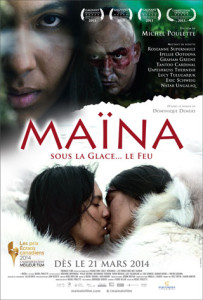 “Maina” is the featured film this year at Wunter’s Gathering,

The Arctic Film Festival features 15 films this year, ranging from short documentaries to full-length films. Friday’s featured film will be “Maina,” an award-winning movie that tells the story of the first encounters between First Nations and Inuits 600 years ago. Director Michel Poulette will be on campus to talk about it, too.

Here’s a link to the trailer.

And here’s a link to the complete schedule of events and movies during Winterer’s Gathering.

Some events are free, others require a $5 donation. A $25 pass gets you into everything plus a membership to North House Folk School. 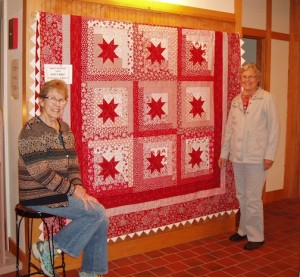 “Cozy in Red,” a quilt created by Polly Erickson (right) with finishing touches added by the rest of the Cross River Quilters, including Dory Spence (left), will be raffled off on Saturday. .

Holiday celebrations begin this weekend with Holidays in Schroeder, featuring the North Country Creations Bazaar at the Schroeder Town Hall from 10 a.m. to 2 p.m., and an open house at the Cross River Heritage Center with lefse and krumkake demonstration and a surprise visit from Mrs. Santa Claus.

Also on Saturday, Kah-Nee-Tah Gallery in Lutsen invites everyone to their First-Year Celebration at the gallery from 4-8 p.m. Eric Frost will play from 4-6 p.m., and Bentley Gillman will play from 6-8 p.m. Refreshments will be served. There will also be a bonfire and lots of new art to enjoy. 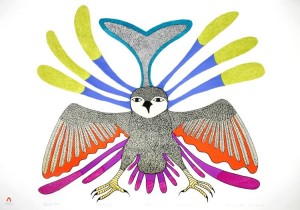 Kenojuak AShevak, (Inuit), Spirit Owl, from the Kenojuak Lithography series, is on exhibit at the Thunder Bay Art Gallery.

“Unlimited Edition,”  an exhibit organized by the Kamloops Art Gallery in Kamloops, B.C. and curated by Tania Willard, opens at the Thunder Bay Art Gallery on Friday.  The exhibit, which features works by a number of indigenous artists, showcases prints that relate to ideas of cultural story, politics of land, and the beauty of Indigenous aesthetics.

Other exhibits at the gallery include “Form & Flow: Sculptures from the Collection,” “Permanent Collection Spotlight–Carl Ray” and “Preservation/Desire to Fill: Susan Kachor Conlon and Carol Kajorinne.” All the exhibitions continue through Jan. 10. 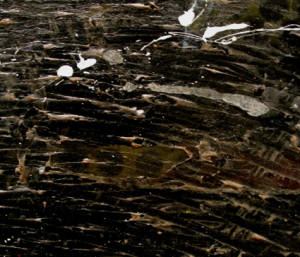 The Definitely Superior Art Gallery in Thunder Bay will hold a gala reception from 7-10 p.m. on Friday night to launch two exhibits: “Sensibilia: Annual Regional Juried Exhibition” featuring works by 40 local and regional contemporary artists and Quentin Maki’s “Kurrents,” an exhibit of new work by the Thunder Bay artist who is a sessional faculty member in the Visual Arts Department of Lakehead University.

In other art news:

This is the last weekend to see the Grand Marais Art Colony‘s Annual Members Show. The exhibit, which is in the Founders Hall, features a variety of work including painting, sculpture, pottery, mixed media and more. The Art Colony is open from 9 a.m. to 4 p.m. daily.

Neil Sherman will have his work included in the exhibit “North: An Exhibition of Paintings” at the Grand Hill Gallery in St. Paul opening Dec. 3 with a reception from 6:30-9:30 p.m. 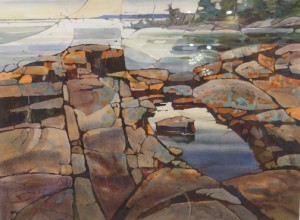 Sivertson Gallery has just received watercolor paintings by a new artist, Dan Wiemer of Red Wing. The collection includes original works as well as giclees. Wiemer, who paints en plein air as well as in the studio, is past president of the Minnesota Watercolor Society. He currently works as an artist, illustrator and workshops instructor.

The Grand Marais Art Colony is accepting applications for the Artists-In Residence program in 2016. The Art Colony hosts two, two-week residencies: one in the eco-friendly printmaking studio, and one in the multi-use Founders Hall studio. Artists will be provided with lodging, workspace and a weekly stipend.  Two artists may also apply to work in a collaborative residency. Applications are due Dec. 11.  Click here to see the application and/or call the Art Colony at 218-387-2737 with specific questions. 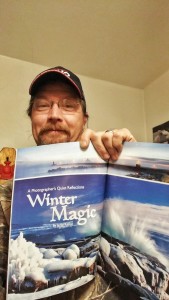 Photographer Jamie Rabold, who founded the popular Frozen Photographers Facebook page, has six of his photographs published in the latest Lake Superior Magazine. Photographs by Michael Furtman and Christian Dalbec are also included in rhw issue. Members of the Frozen Photographers, including Rabold, have exhibited at the Johnson Heritage Post.

Waterfalls were a theme this week for photographers, that’s for sure. Here are just a few of the images that were posted in the last three days: 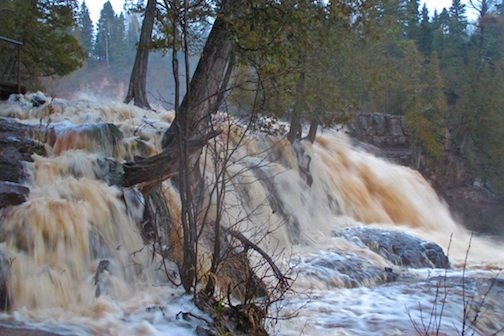 Lyn Wermter took this shot of the Gooseberry on Wednesday, Nov. 18. 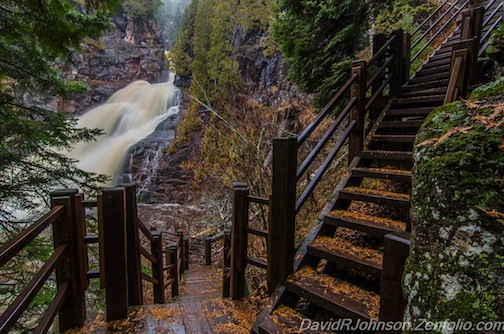 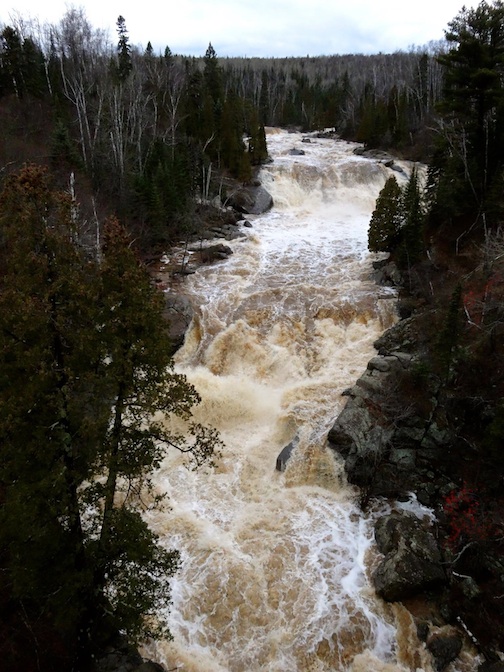 Even small streams looked like they were carrying spring run-off. 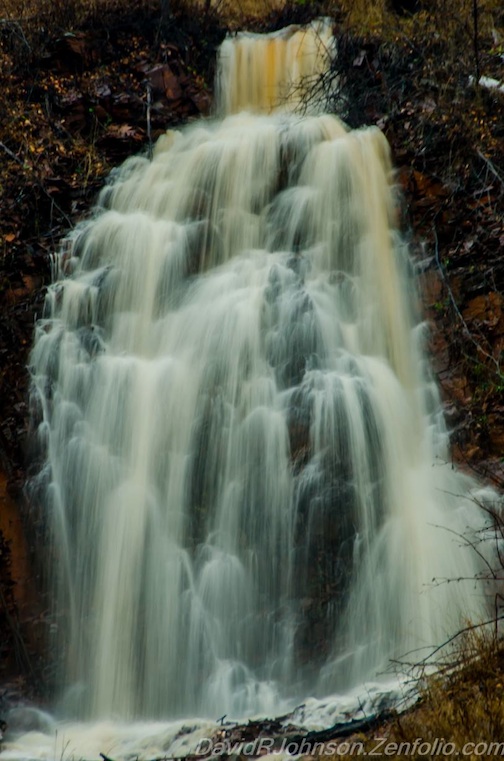 Lake Superior was “talking” a little, too. 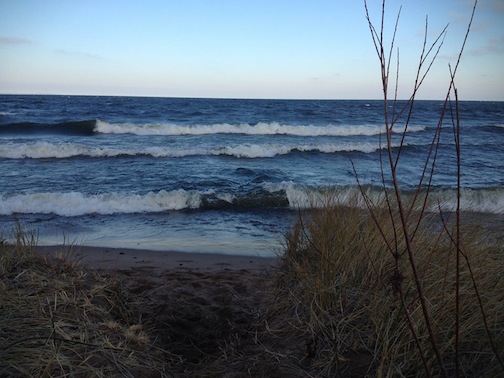 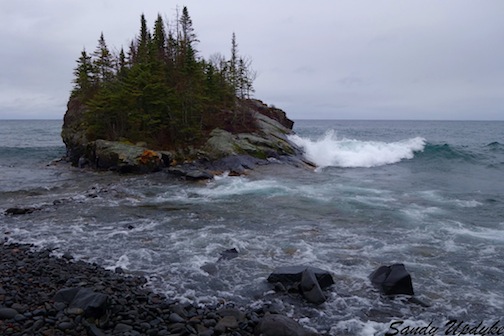 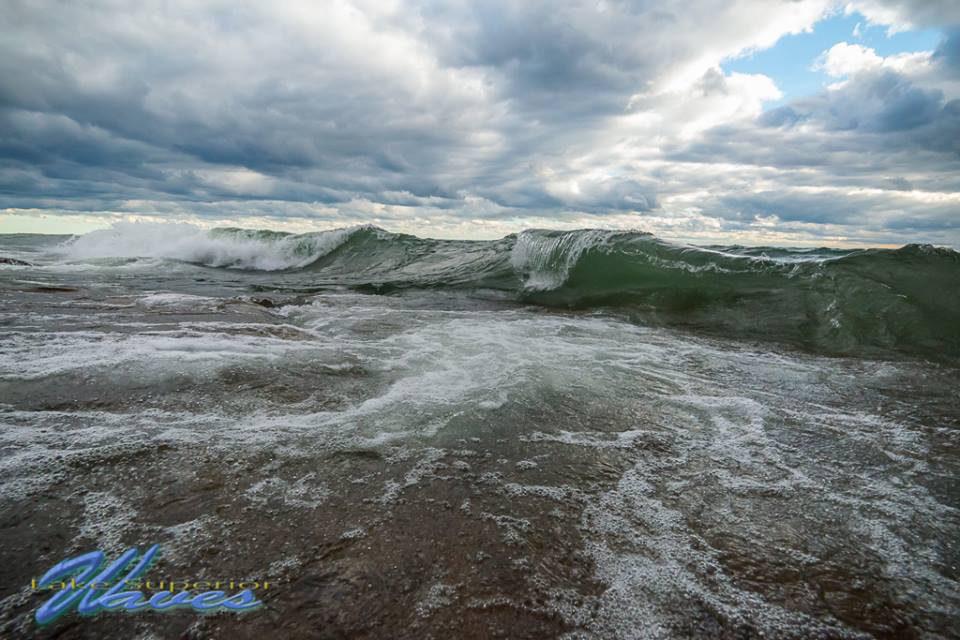 Sunrises and sunsets were pretty incredible, too. Here’s a selection. 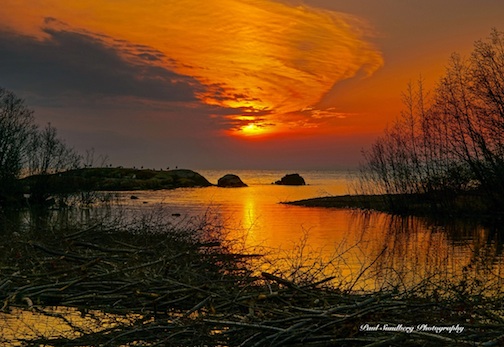 Sunset Over the Beaver Pond by Paul Sundberg.

Red Sky in the Morning … by David Johnson. 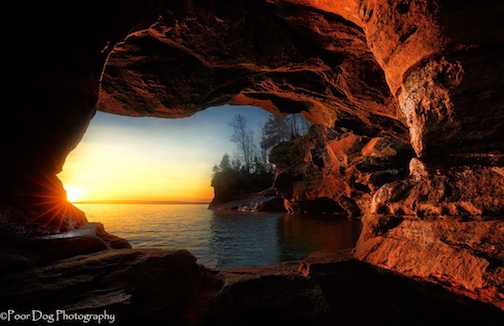 We also had our first dusting of snow. Travis Novitsky documented this in two lovely images. 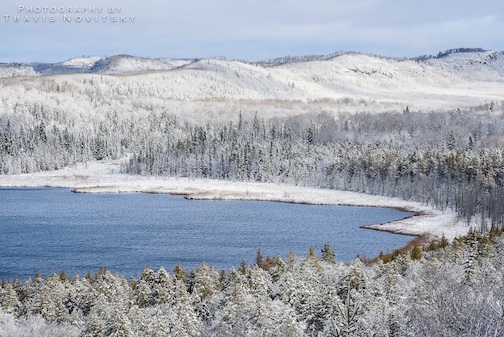 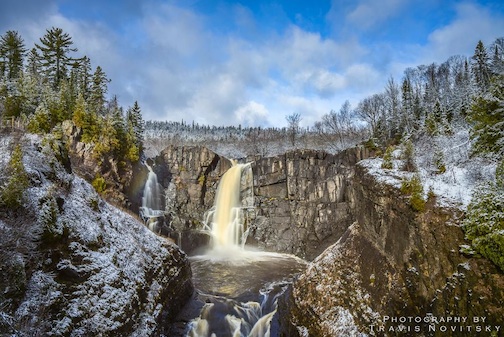 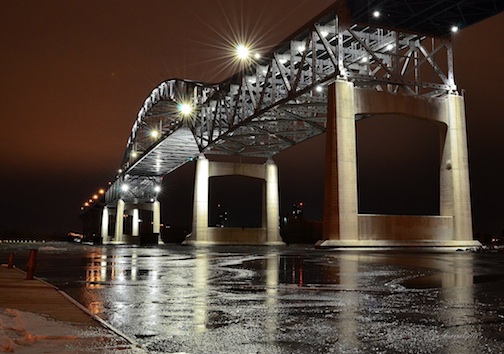 Next post: Launching the Holidays with a Parade, the New Standards, the Hovland Arts Festival & the Holiday Market