Fingerstyles, Meltdown, a Musical & Art in the Core 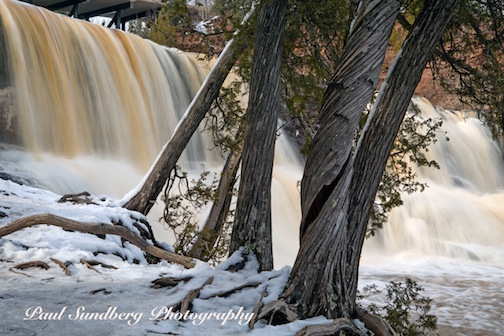 Paul Sundberg took this wonderful photo of the falls at Gooseberry State Park.

First up is the 6th annual Fingerstyle Masters Weekend at Bluefin Grille on Friday and Saturday. 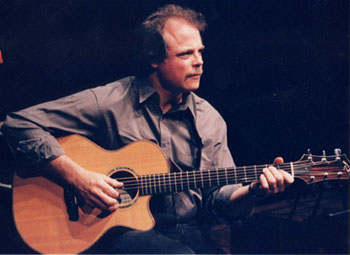 Pat Donohue is a guest artist at the Fingerstyle Masters Weekend.

The event, which is a benefit for WTIP Community Radio’s equipment replacement project, kicks off with a free concert at 8 p.m. Friday at Bluefin Grille, featuring Gordon Thorne and friends playing blues, swing and early Americana.

On Saturday, workshops will be held for those looking to fine-tune their musical skills starting at 10 a.m. and are open to musicians of all ages and skill levels.  Fingerstyle master Pat Donohue will offer a workshop, as will virtuoso fiddler Tom Schaefer. Both are $50 and include lunch. Thorne will teach a free youth guitar workshop from 10 a.m. to noon.  Pre-registration for the workshops is requested. Contact Thorne at 218-353-7308 or oman4@live.com.

The event caps off on Saturday night with a 7:30 p.m. concert featuring Pat Donohue, with Chris Gillis on piano and Tom Schaefer on fiddle in the upper room of the Grille. Tickets for the concert are $20 and will be available at the door, or in advance by contacting Thorne at 218-353-7308 or oman4@live.com. This is always a popular event, so get your tickets early.

This weekend is also Mountain Meltdown weekend at Papa Charlie’s with lots of music throughout the weekend. Singer/songwriter Erik Koskinen performs on Friday night (9:30 p.m.) and a variety of musicians perform on all-day Saturday. (See schedule below.) Frogleg plays the evening show, starting at 9:30 p.m.

The music continues through Sunday, with local bands, Cook County’s Most Wanted and the Spruce Roots among the line-up. (See music schedule, below.) 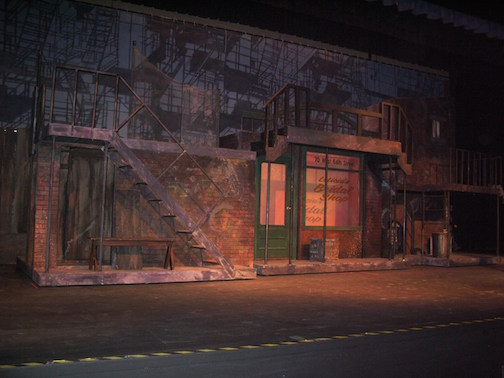 The sets for “West Side Story” were designed by Ann Gumpper, a set designer for theater and ballet based in Duluth. The musical  opens in Silver Bay on Thursday.  (Photo by Kurt Mead.)

It was an ambitious project, said Paul Deaner, executive director of Lake 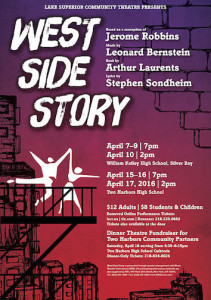 Superior Community Theatre, and features the original music by Leonard Bernstein and lyrics by Stephen Sondheim.

But not to worry– this lively and talented community theatre company has successfully tackled a number of musicals and dramas since it was first established in 2002, including “Annie,” “Guys and Dolls,” “Grease” and “The Music Man,” as well as Arthur Miller’s “Death of a Salesman.”

Thunder Bay will really be hopping on Saturday night, too,  when the Definitely Superior Art Gallery  (DefSup) presents “Urban Infill 10: Art in the Core” on Saturday with art exhibits and live performances throughout the Waterfront District as well as a gala opening reception for exhibits of contemporary art at the gallery itself. 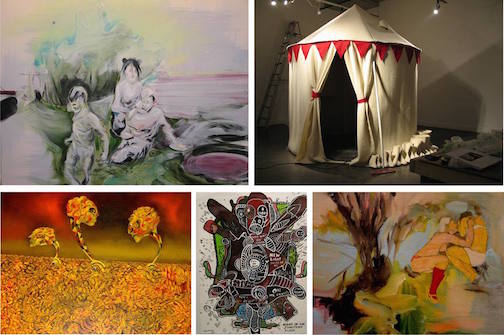 New exhibits open at the Definitely Superior Art Gallery during Urban Infill: Art in the Core with a gala reception from 7 p.m. to 11 p.m. EDT.

This year, Art in the Core will feature works by more than 350 artists (regional, national and international/multidisciplinary) at 24 downtown locations, including: DefSup, commercial spaces/art galleries, artist studios and empty spaces transformed into new gallery and performance venues. Art in the Core is one of the largest presentations of visual & media arts and is unique to Thunder Bay. More than 1,500 people attended last year. The event focuses on revitalizing the downtown area by bringing in artists and musicians to exhibit and perform in the district. 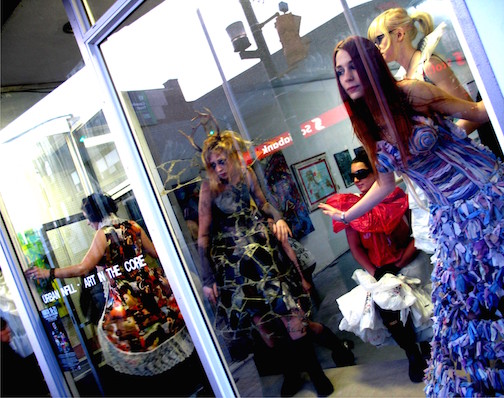 Wearable Art performances are held in the windows of downtown shops on Saturday night.

The event also features seven bands, video mapping and projections, street art, Fringe Theatre and more. Tour Guides set out from DefSup to lead participants through the district, and maps can be picked up at DefSup as well. The art exhibits continue through April 12. For more info, visit www.definitelysuperior.com. 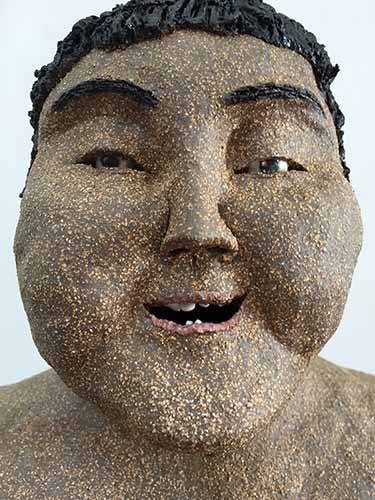 Detail of a sculpture by Ericka Anderson, “Straight to the Hips” currently on exhibit at the Thunder Bay Art Gallery.

The exhibit features a wide variety of art in many mediums, including paintings, ceramics, sculpture and installations. Here’s a great video taken while the exhibit was being set up.

In other art news, the Betsy Bowen Gallery is open Wednesdays from 11 a.m. to 5 p.m. this spring with a variety of work by local and regional artists, including new jewelry by Ron’s World Rocks. Ron (Piercy) has been working with silver, and local and global gems, with a focus on rings. 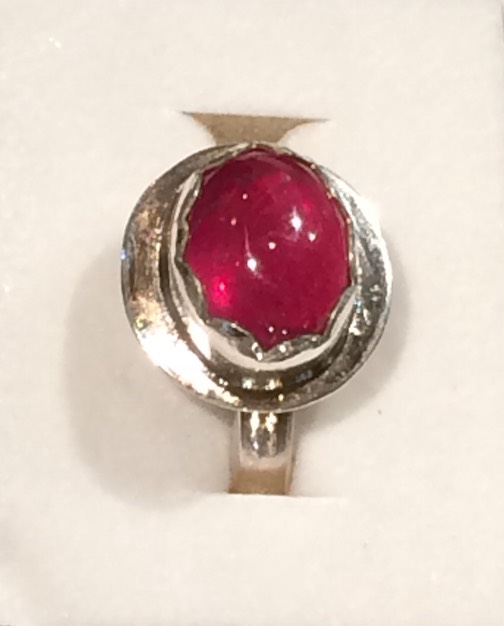 One of the new rings by Ron Piercy.

Tettegouche State Park has just mounted a new exhibit. Painter Doug Ross is now exhibiting his work in the Great Room at the park. The exhibit is up through the end of May. Ross will give an artist talk at Tettegouche at 7 p.m. May 27. Stay Tuned. 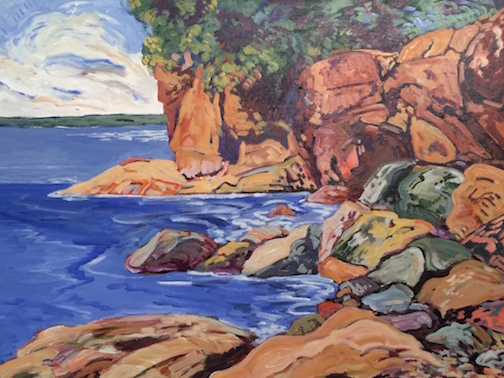 One of the paintings by Doug Ross on exhibit at Tettegouche State Park.

Bryan Hansel has a series of photographs hanging at the new St. Luke’s Rheumatology Associates in the Northland Medical Building on First Street in Duluth. The medical group moved into a new and larger space and elected to use Hansel’s photographs of familiar Duluth and North Shore sights to enhance the space. 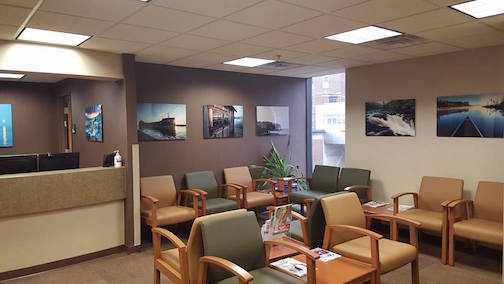 A selection of Bryan Hansel‘s photographs has been installed at St. Luke’s Rheumatology Associates in Duluth.

Sandi Pillsbury-Gredzens will be exhibiting 30 paintings in an exhibit at St. Mathews Episcopal Church in St. Paul entitled “Witnessing Nature: Variations of God’s Creation.” The exhibit continues through July 15 with the opening reception from 11:30 a.m. to 1 p.m. on Sunday, April 10.

“Lake Superior Landscape: Spring in Castle Danger,” an award-winning painting by Sandi Pillsbury-Gredzens, which will be on exhibit at the show.

Dan and Lee Ross will be exhibiting at the American Craft Council show at the Minnesota RiverCentre in St. Paul this weekend. 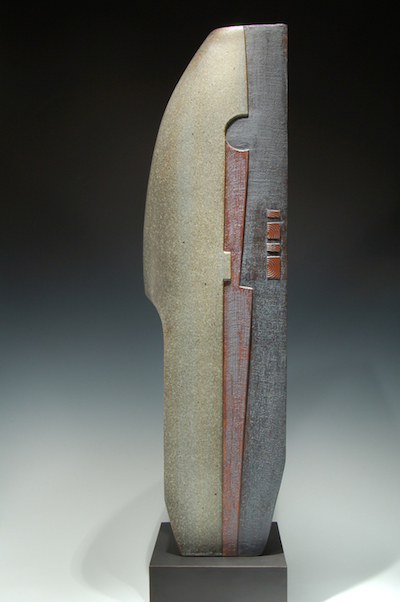 “Relationship” by Dan and Lee Ross.

The Grand Marais Art Colony has an opening for a gallery store manager. The applications are due on Saturday, April 9. Also, the Art Colony will hold the last Open Studio: Creative Playtime from 9 a.m. to noon on Wednesday, April 13. All invited. Tuition is $12. Artist volunteers will be on hand to guide participants as needed, but this is a very informal opportunity to simply get creative and have fun. For more info, call 387-2737.

Also in Art Colony news, the Eric Thomas Emerging Artist Award applications are due April 23. The Art Colony and Leah Thomas are pleased to announce the second year of the Eric Thomas Emerging Artist Award, in memory of Leah’s brother Eric (1956 – 2013). This annual scholarship provides full tuition and cost of materials for a young Cook County artist to attend a Grand Marais Art Colony class of their choice. Cook County high school students who are completing their sophomore or junior year, or the equivalent home school program, are eligible to apply.

Last year’s recipient, Isabel Wahlers, had the opportunity to strengthen her drawing skills by taking the class “Drawing Through History” with instructor Jeff Niesen.

More information and applications are available from the Art Colony at 387-2737 or through Mary MacDonald, the art teacher at ISD166.

The Grand Marais Writer’s Guild will meet at the Whole Foods Co-op from 6-7 p.m. on Monday, April 11. The prompt topic will be “Character Portraits.” All writers invited. To learn more, click here.

And here’s the latest news from cellist Yvonne Caruthers, who is in Washington, DC, rehearsing for the Washington Opera’s production of Wagner’s Ring Cycle that will be performed at the Kennedy Center April 30-May 22.

She has been in Washington rehearsing with the orchestra since March 14, and she’s been blogging frequently about the experience. It’s a fascinating read. She always includes photos and links to more info.

She leads with this photo: 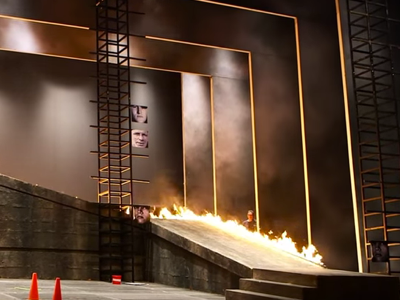 “If I saw fire running along the floor, coming towards me, I don’t think I’d stay cool, calm, and collected,” Caruthers writes in her blog. “But if you watch the newest video clip created by the (Washington) opera company, you’ll see what’s going on. Fire is almost a character in the Ring cycle, and it’s handled different ways in different productions. . .”

So, click on the link, and you will be transported into the fascinating world of opera with all its fantastic sets and drama.

Caruthers took a few photos for us from her point of view: the opera pit with conductor Philippe Auguin, and a rehearsal scene.

Yvonne Caruther’s view from the orchestra pit during a rehearsal with conductor Philippe Auguin.

And here’s a scene from a rehearsal. 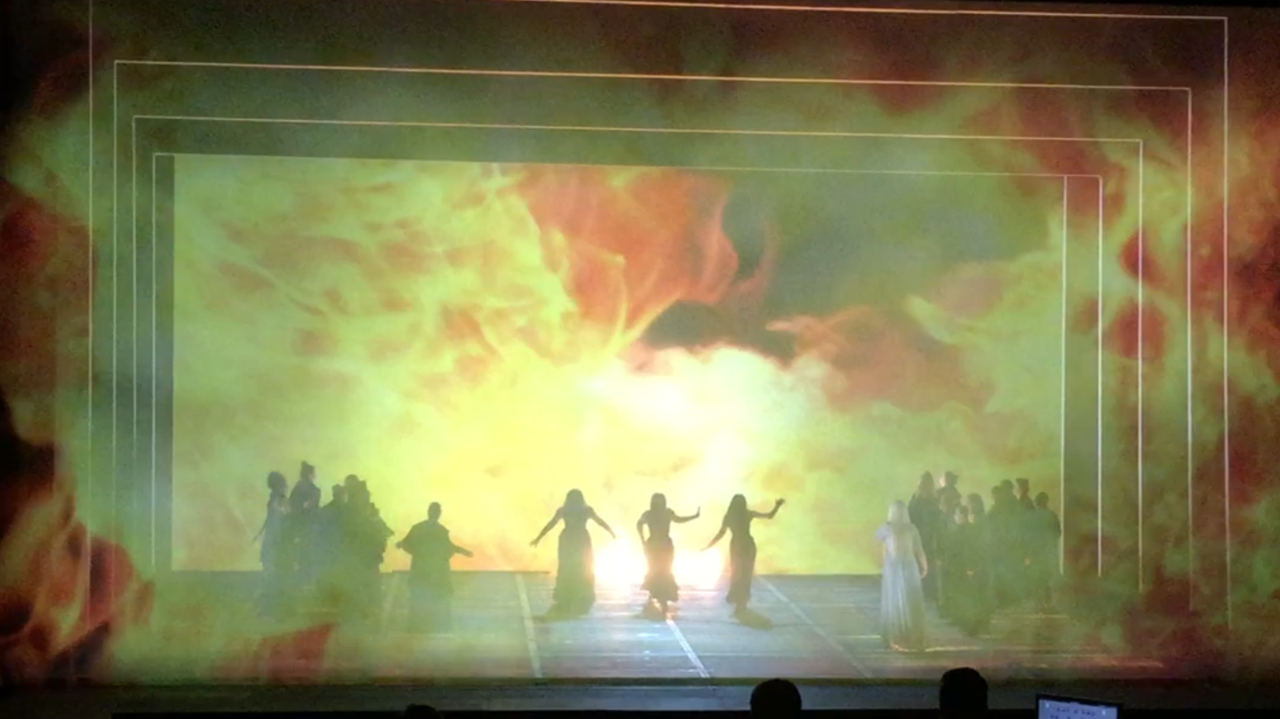 More fire! A scene from the”Twilight of the Gods,” the last of the four operas in the Ring Cycle.

Here’s the link to Caruther’s blog. Check it out for frequent (and interesting) updates.

And, last but not least, Lonnie Dupre is planning a climbing expedition to Begguya, a 14,000-foot peak in Danali National Park. He and his team will leave April 22. He will be on WTIP’s The Roadhouse on Friday night to talk about the expedition. The show airs from 5-7 p.m. It can also be streamed at www.wtip.org 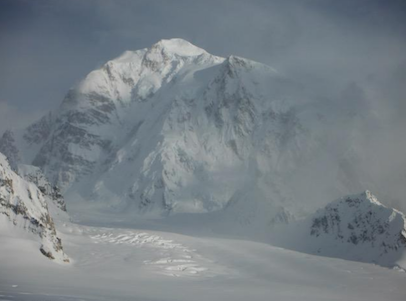 Lonnie Dupre and a team of climbers will climb the 14,000-foot peak Begguya later this month.

And finally, here are a few landscapes and wildlife photos that we found this week. Enjoy! 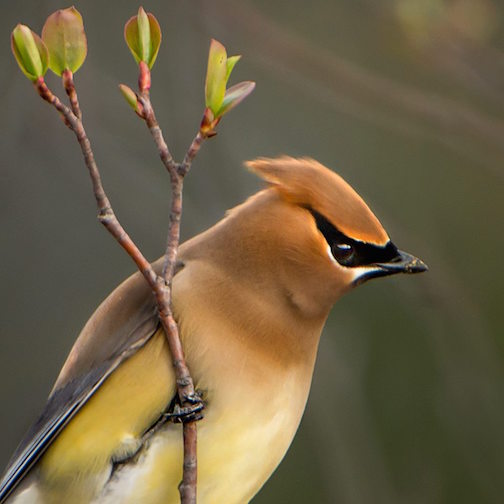 Jim Brandenburg took this wondrous shot of a Cedar Waxwing. 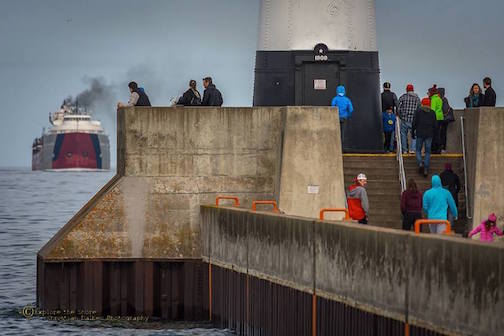 Christian Dalbec took this fantasic photo the other day as a ship approached the Lift Bridge in Duluth. 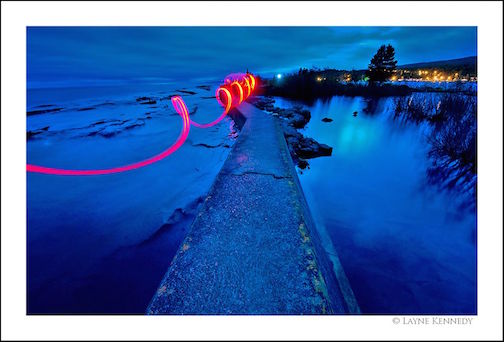 “Evening Walk in Grand Marais by the Big Pond” by Layne Kennedy. 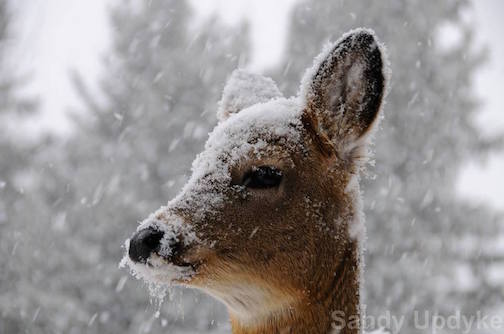 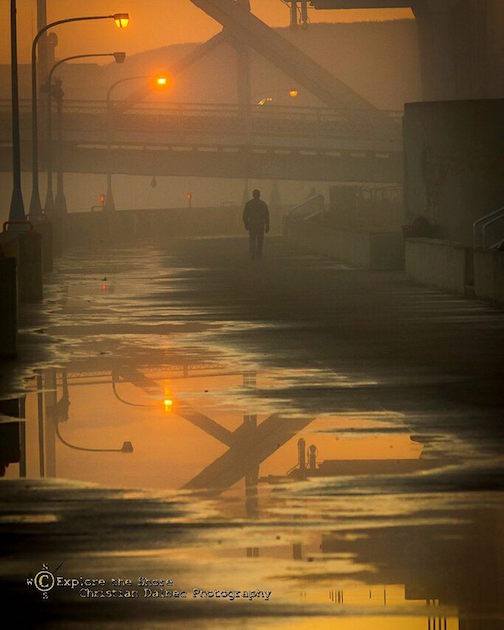 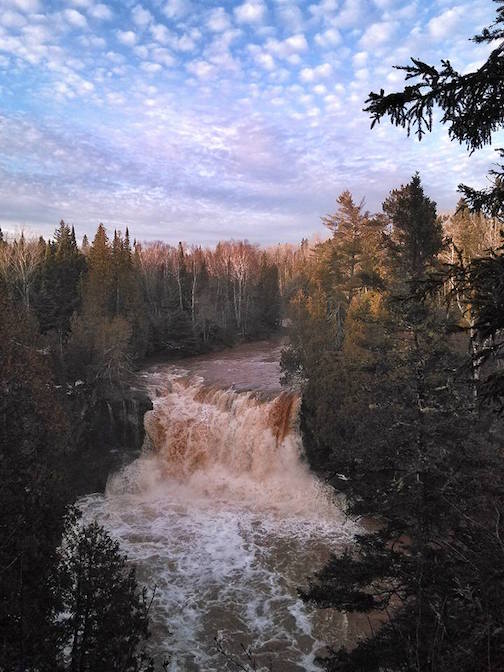 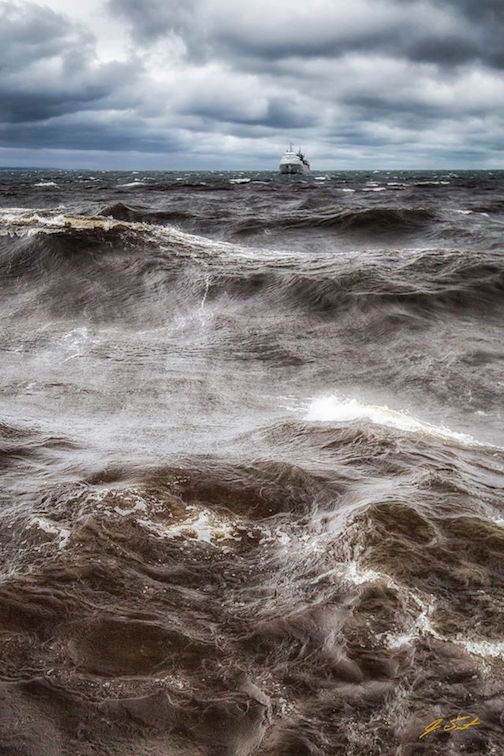 The laker “Michipicoten” comes into port by Jakob Trost.