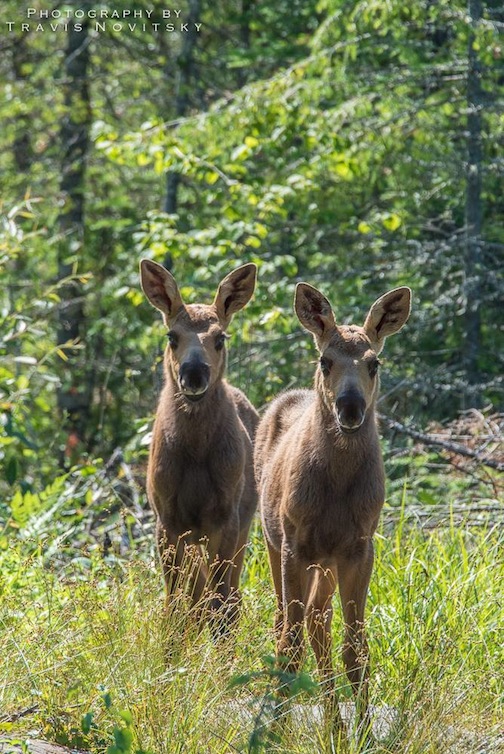 Moose calves!! Travis Novitsky caught these two watching him in the woods the other day.

There’s plenty to watch this weekend: two summer theater productions, a backyard concert, booksignings, art exhibits and a chalk art festival are just a few of things we can look forward to.

First up is the debut of the  Grand Marais Playhouse‘s Summer Theater Festival featuring a comedy and a musical in repertory Thursday through Sunday to Aug. 9.

The theater festival opens with the comedy,  “Moon over Buffalo,” at the Arrowhead Center for the Arts at 7 p.m. Thursday. The cast includes some of our favorite comedic actors:  Bob Carter, Marcia Hyatt, Sarah Stover, Jan Healy, Kevin Kager, Saraphine Metis, Braidy Powers and Tom Christiansen. The play was directed and designed by Sue Hennessy. Tickets can be purchased at www.tix.com or purchased at the door. 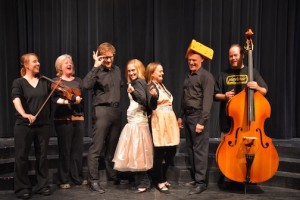 The cast for “I Love You, You’re Perfect! Now Change!”

For the complete schedule of plays during the theater festival, click here. 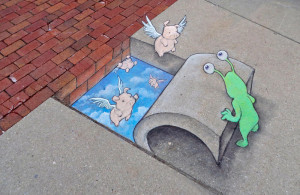 If you’re traveling to Duluth over the weekend, consider stopping off in Two Harbors to take in the Chalk.a.Lot Sidewalk Festival to held at Thomas Owens Park from 8 a.m. to 5 p.m. Saturday and 8 a.m. to 2 p.m. Sunday. Nationally known sidewalk chalk artist, David Zinn, from Ann Arbor, Mich., will be one of the featured artists this year. For a fee, artists can reserve a sidewalk space and receive chalk and other supplies. Awards will be given, For more information and a link to register, check out the Chalk.a.Lot Facebook page here. 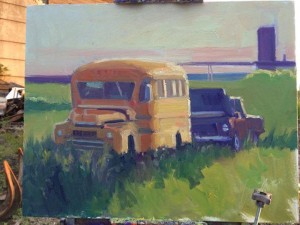 In Duluth, Plein Air Duluth: Art du Nord opens at the Duluth Art Institute with a reception from 5-6 p.m. on Friday.

For the past week, 35 artists have been painting all over the city and their work will be on exhibit at the Art Institute through Sept. 2.

There are some great exhibits to see in Cook County as well.

Through Our Hands IV is just finishing up a successful run at the Johnson Heritage Post. This is the last weekend to see this spectacular show, featuring the work by members of the Northwoods Fiber Guild. The Heritage Post is open from 10 a.m. to 4 p.m. Thursday through Saturday and 1-4 p.m. Sunday. 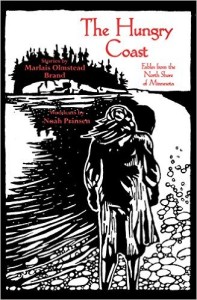 On Saturday,  Marlais Brand will read from her new book, “The Hungry Coast” from 4-5 p.m. at the gallery. Illustrations for the book were crafted by Noah Prinsen and an exhibit of his woodblock prints will accompany the reading.

Brand will be interviewed about her book on WTIP’s The Roadhouse on Friday. The show airs from 5-7 p.m. Betsy Bowen Studio & Galleries is open daily from 11 a.m. to 5 p.m.

Potters Bob Briscoe and Jason Trebs are the Spotlight Artists of the Month at the Grand Marais Art Colony‘s gallery shop. The shop also features a variety of work by members of the Art Colony as well as participants in the recent Grand Marais Arts Festival. The Art Colony is open from 9 a.m. to 4 p.m. daily. 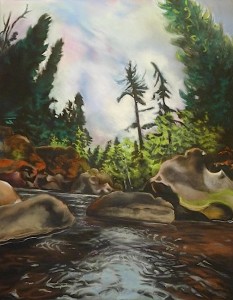 “Tettegouche” by Charlotte Durie is on exhibit at the Cross River Heritage Center..

The Cross River Heritage Center’s new exhibit, “Lost Resorts” continues through the summer and on Saturday at 11 a.m., Barb Livdahl will give a presentation about the exhibit. All invited. 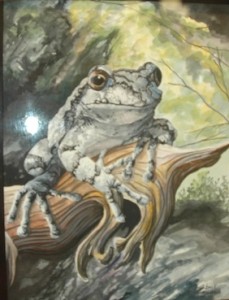 And not to forget the Art in the Park series at Tettegouche State Park. This month painter Dale Knaffla is exhibiting his work, which includes watercolors and airbrush works as well as paintings on moose antlers and slabs of wood.

Artists interested in showing their Northwoods-themed art at Tettegouche should send a portfolio of representative image jpegs via email to kurt.mead@state.mn.us. All submitted art will be treated as private property and will not be used or distributed in any way without the artist’s permission.

In other art news, author Thomas Maltman reads from his new book, “Little Wolves” at Drury Lane Books at 5 p.m. on Saturday. 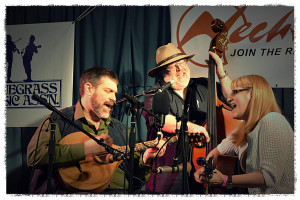 Singleton Street plays at Art House B& B on Saturday.

At 7 p.m. on Saturday, the band Singleton Street will be play for a backyard concert at Art House B&B, 8 7th Ave. W. It’s a kid-friendly event with s’mores and a campfire. Admission is $10.

The 120th anniversary of the Chippewa City Church will be celebrated at the church just east of Grand Marais on Hwy. 61 from 1-4 p.m. on Sunday. Chippewa City historian Staci Drouillard will give a presentation and slide show at 1 p.m. and the SplinterTones will play from 2-4 p.m. The event is also a fundraiser for renovations at the church. There will be a silent auction and refreshments. All invited.

The Grand Marais Arts Festival was a great success this year. Preliminary figures indicate that attendance was up by 3,000, said Carolyn Fritz, events coordinator for the Art Colony, which sponsors the event. A special edition of pint glasses with logos of  both the Art Colony and Voyageur Brewing Co. are now available. Purchasers will receive a free beer from the brewery with the purchase of the glass.

The Die Active graffiti/street art mural at 42 Court St. S. in  Thunder Bay is about half completed. 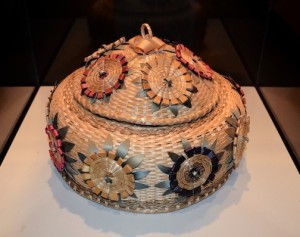 Flowered Basket by Charlotte Deformier is in the “Woven from Wood” exhibit.

We found some strange and wonderful photographs this week. Here’s a sampling:

Layne Kennedy was in Iceland recently and shared some of the photos he took while there.

Here’s one of a blue-eyed horse, a breed found in Iceland. 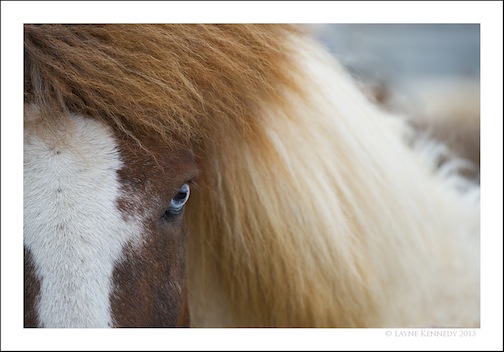 And here’s an incredible photo of a huge iceberg Kennedy took in Greenland. Here’s what he wrote about it: “This image (was) snapped around midnight last Saturday evening in Baffin Bay of a Illulissat iceberg, part of the UNESCO World Heritage Site in Greenland. It could take three to four years for this iceberg to crack and break apart and drift off.”

A little closer to home… here’s another amazing phenomenon. 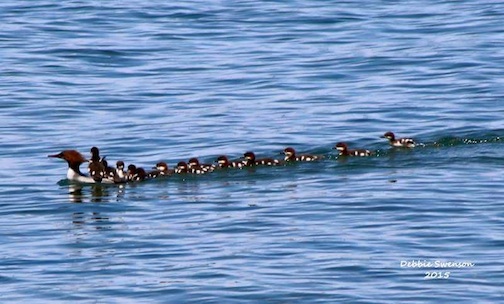 Merganser with her brood.. 11 or 12 chicks? Photo by Debbie Swanson. 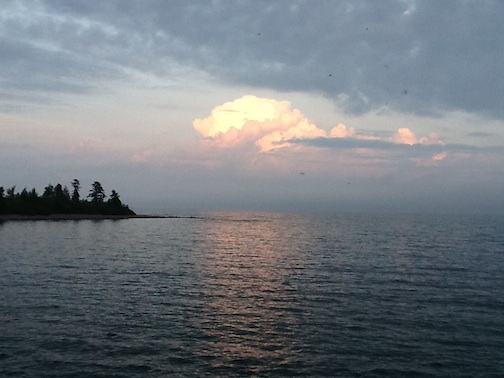 Here’s a water shot, up close and personal. 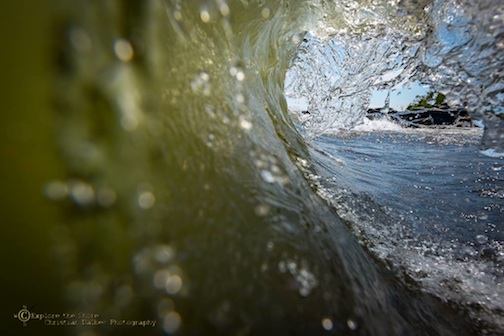 “Stoney Point in a Curl” by Christian Dalbec.

Here’s another unusual but intriguing photo: Northern lights in black and white. 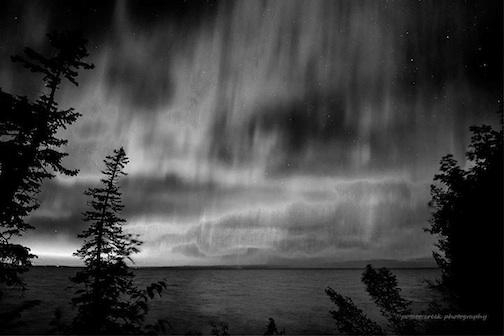 And last, but not least, the daddy of them all. 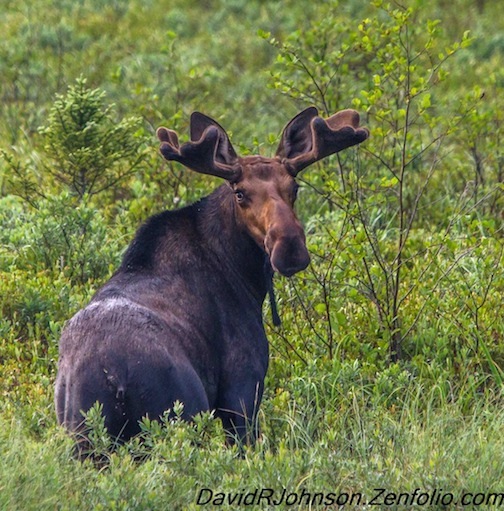